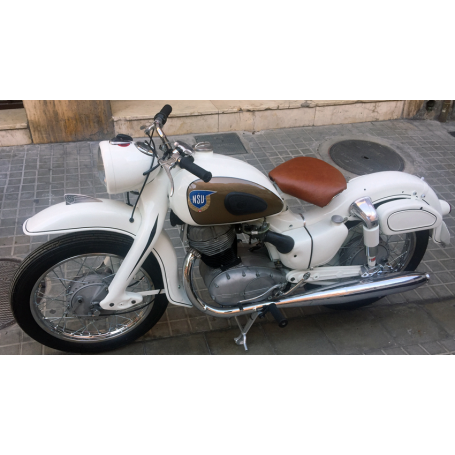 Motorcycle NSU manufactured from the motorcycles in Germany

In perfect state of functioning. With all the guarantees. Bids do not include transportation or export, and/or DUA customs, management enrollment, or documentation. To avoid disappointment, it is advisable to view the vehicle before bidding. For an appointment to visit, please contact Artsvalua.

In 1873 two young mechanics by Heinrich Stoll and Schmidt, christian began a "mechanical workshop for the manufacture of knitting machines". Then mudraon to facilities more appropriate, based in neckarsulm and they took the name NSU from the first letters in the names of the rivers surrounding the plant: N Eckar and lm YOUR.

The production of bicycles began in 1886, Germania was the first model that came out of his line of production, followed by models with smaller wheels as the bike Pfeil (Arrow) in 1888. In 1892 he discontinued the manufacture of machine knitters.

In 1897, the name of the company changed to Neckarulmer Fahrradwerke AG Bicycle Factory, based in neckarsulm). In 1901 begins the production of motorcycles. Its engine was a single cylinder four-stroke with 211 cm3 provided by the manufacturer, swiss Zedel and came from Zürich by Zürich & Lüthi. The first Neckarsulmer Motorrad (as said in your gas tank) had a power of approximately 1.25 HP and had a top speed of approximately 40 km/h. From 1904-1905 renamed to N. S. U.

NSU before the first world war was the largest German company engaged in the export of motorcycles (with main destination Russia, western Europe, Scandinavia, Turkey and Brazil). At the outbreak of the war, in 1914, produced for the army and a motorcycle for military use with 3.5 CV, and trucks with a payload of 1.25 and 2.5 t .

After the first world war they build a variety of motocilíndricas and v twin including racing bikes.

1931 NSU produced a new engine of the bike with the Motosulm. And in 1936 the production of bicycle Adam Opel was acquired and increased sales success.

Also manufactures at this time 2-stroke engines other than the 4-stroke continued. The models of 2 times were from 98 cc to 200 cc, while that of the 4 times were take 200 cc to 600 cc, all with overhead valves.

Then came the second World War and once again NSU received the order to produce for the military: the motorcycle 250ZDB and Kettenkrad, a vehicle halftrack equipped with a motor Opel Olympia were its two main outputs.

The factory, based in neckarsulm was partially destroyed in a bomb attack just a couple of weeks before the end of the war. The plant was used as a "repair shop" for the allied forces after the war, but from the remains of the aircraft 98, in 1945, was rebuilt with a seamless restart NSU. and in the early 50's NSU began manufacturing the Italian bike Lambretta

In 1949 begins the production of the new 98 cc model Fox 4-stroke, overhead valve, engine is very economical with a chassis of pressed steel and rear suspension cantilever. NSU built scooters lambretas with license this.

Continued the popular and Konsul I and II, 350 and 500 cc, from before the war, had proposed to compete with BMW and Zündapp. These disappeared in 1953 when Max, 4 - stroke, 250cc, was introduced.

In 1953 it produced the Quickly Mopeds, which were a great success as they made over 1 million in the next 10 years.

In the years 50NSU was a great success on the race tracks all over the world with their motorcycles. The license to build scooters Lambretta expired in 1955 and the builders NSU created their own version, 147cc large D Premium, which came to market in 1956. The scooters are developed quickly and soon the III Premium 150cc and 175cc of Premium V (Fünfstern) were put on the market.

NSU even had a 4 - stroke Max engine based scooter, the Maxima, almost ready for the production at the beginning of the 60's, but as the sales of scooters abandoned the project was scrapped.

In 1953, NSU Werke AG developed its first car of the post-war: the NSU Prinz, in its initial phase as a motorcycle with three wheels and a bodywork closed with the engine of the motorcycle to the Max, later changed the concept to that of a four wheel vehicle with a rear engine 2 cyl. air-cooled 583 cc 20 HP (15 kW) (also derived from the Max). In 1957, the car was presented to the public in the framework of the Frankfurt motor show. It was followed by the Prinz 4, which also offered a moderate consumption of fuel. In 1959, he was introduced to the market the Sportprinz with the mechanics of the Prinz II and Prinz III (motor of 30 HP). The Sportprinz was a sports coupé two-seater, whose bodywork was designed by Bertone.

NSU built the first Wankel engine that was ready to be tested in a car in 1960, and in September of 1963 was the Wankel Spiderpresentado at the fair of Frankfurt.

The last scooter he left the band in 1964 and the era of the motorcycle was completed in 1965 with Quick50. Not even the bicyles NSU were really more like they were license made by Heinemann.

The development of the rotary engine was a very high cost to the small business. Problems with the seals of the tip of the motor rotor significantly damaged the reputation of the brand among consumers. In 1969, the company was sold to the Volkswagen Group , who merged with NSU and Auto Union . The new company merged, llamóAudi NSU Auto-Union AG, and represented the actual end of both the NSU and DKW brands, with all future production to bear the badge of Audi (although retaining the four interlocking circles of Auto Union). The management of the plant, based in neckarsulm moved to the headquarters of Audi in Ingolstadt . When the small models with rear-engine NSU (Prinz 4, 1000, 1200) were phased out in 1973, the Ro 80 was the last car still in production carrying the badge of NSU. Audi did not make use of the brand name NSU again after April 1977, when the last Ro 80 was sold.

NSU was sold to the Volkswagen Group in 1969. VW merged the company with Auto Union , which evolve with time in the Audi. Continued productions, but in 1984 the name NSU was discontinued in the production of VW / Audi.

The series Renn Max, made his debut in the world championship in 1952 in versions of 250 cc and 125 cc with 4 stroke engines twin and double camshaft in head.

In 1955 the veteran German pilot Herman Paul Muller, obtains the title of the 250 cc. Despite the fact that at this time the Italian brands had supremacy, as Guzzi, Benelli, MV Augusta, in the World, which were displaced by NSU.