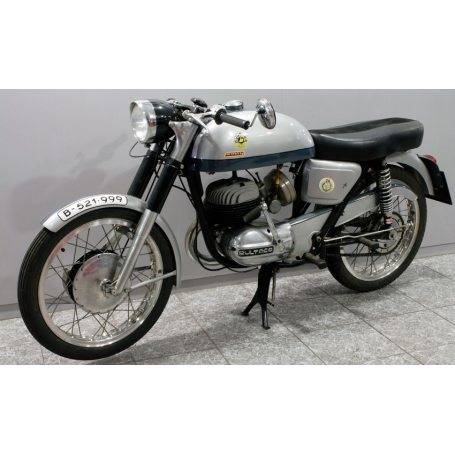 Registered. With papers a day.

The spaniards Pere Permanyer and Francisco Xavier Bultó Marqués (grandfather of Sete Gibernau Bultó), better known as Don Paco, founded in 1944, the brand of motorcycles Montesa. Don Paco left this company due to the abandonment of the competition, as she believed that the innovation in the motorcycle was inextricably linked to the world of racing and founded the may 17, 1958, Bultaco in Barcelona.

The name of the brand is the invention of the own Bultó (a lot of people think, incorrectly, that it must be the pilot of Gibraltar John Grace, who thought that would be a combination of the surname of the founder, Bultó, and his name, Paco), already used for years such as your address, telegraphic particular. The particular logo, designed by Don Paco, is a finger and thumb sign that all is well.

The first model was a sport bike called a Bultaco Whiplash 101. After several developments of the same (Whiplash Sport or TS, Whiplash Super-Sport or TSS, this last a model just for competition) , was launched in 1964, the famous Shrapnel 62 of 200 cc, which would culminate four years later in the most famous of the machines of road of the brand: the Shrapnel Mk2 250 cc.

In 1964 Bultaco was introduced in the market and in the competition of the trials bike with the model Sherpa. You can consider the Sherpa's two times as the first bike manufactured specifically for the practice of this sport. They signed the pilot Sammy Miller to compete and, despite the unfavorable bets that made the press, they managed to beat the first race in which they competed, the first time that he overcame a motorcycle is not british.

The last model that took the mark of the finger rampant was the Streaker, a bike that incorporated already, at that time disk brakes, both in front and behind, something unusual up to date, as they had always used drum brakes.

Finally, Bultaco disappeared after a major crisis (in which the Ministry of Industry forced the leadership of Montesa to buy the brand Bultaco), along with other brands like OSSA and Mototrans (manufacturer of the Ducati in Spain). Other Spanish brands like Puch, Montesa and Sanglas were absorbed by the arrival in the market of brands in japan such as Suzuki, Honda and Yamaha, respectively.

Bultó asked to address Montesa, J. L. Milá at the helm, the rights trade on the logo and the brand Bultaco, claiming that it had no value as none for Honda. Montesa granted free of charge such transfer of property industral and it was thanks to this transaction, by which, in 1999, the brand Derby raised Bultaco with a reprint of the Bultaco Lobito and the launch of a line of sportswear with the logo.