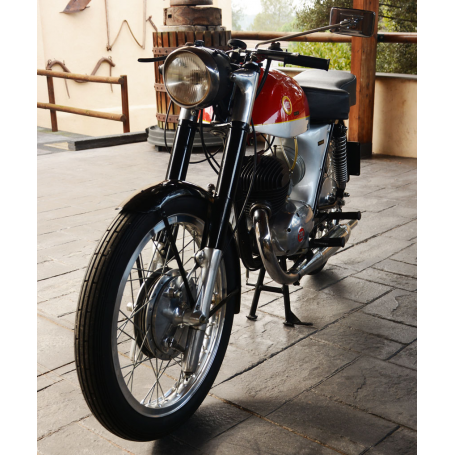 With warranty on the refurbished parts.

The Impala was a touring bike manufactured by Montesa in two stages: the first, from 1962 to 1971 and the second with the name Impala 2, 1982 to 1989. Throughout his commercial life brought several versions almost always in two displacements (175 and 250 cc, in addition to a version of 125 cc of the Impala 2), and even some of suited for motocross, enduro and trial. They all shared, however, the same general features: engine two-stroke single-cylinder air-cooled, rack frame simple, drum brakes and shock absorbers fork conventional in front and behind.

During its golden age, the 1960s, the Impala was one of the biggest commercial successes of Montesa, coming to enjoy a strong foothold. Their strengths were a great reliability technique and a flawless aesthetic, a factor that in the year of its release earned him the award Delta Gold industrial design, awarded by the ADI-FAD. In addition, it offered other advantages that make it especially suitable for the city, among which are its light weight and low power consumption.

Away from to pass of fashion, the Montesa Impala has become an object of worship and is one of the motorcycles classic Catalan most treasured by the fans (there are some that are willing to pay up to 9,000 euros to get one). Currently there are still about 2,500 in circulation, the vast majority in the Catalan Countries-mainly in Barcelona, but also in Girona, Lleida, Mallorca, and Valencia-, and some in Galicia and in Madrid. About this model it has been created a whole network of specialized workshops, restorers and users ' associations (the Moto Club Impala, for example, has almost 200 members). A similar lawsuit has triggered also the theft, to the point that in the summer of 2009, Barcelona stolen, 56.
The creator of the Impala was Leopoldo Milà, who in 1958 had been promoted to director of the technical department of Montesa after Francisco Xavier Bultó and the majority of the technical staff have left the company because of disagreements with Pedro Permanyer. Milan then decided to take forward a project that was incubating for some time: an innovative design of motorcycle 2-stroke and 175 cc that it should be comfortable, robust and reliable. It was one of the most ambitious projects of Montesa and coincided in time with the transfer of the factory from the Poblenou in Esplugues de Llobregat, caused by the growth of the company, which was completed by 1962.
Once already as a designer-in-chief, Milan put aside the project of engine "mono-block" that he was working on then and began to define a new bike on the basis of their own ideas and philosophy. The aim was to build an economical and spent little gasoline but was able to exceed 100 Km / h. To achieve this, it considered the basic three principles: that didn't have a rod of clutch, transmission were not for the primary chain before sprockets, and that the change be the same block as the rest of the engine with the same crankcase.

To design the engine started from scratch, finally getting a force distinct aesthetically from the previous brand. The cylinder was manufactured with injected aluminium, the first manufactured in Catalonia with this system. The change is also designed completely new, with all the pieces rounded, without angle brackets. The traction was by needles, and the shaft had no point of rupture. The exhaust tube (responsible for the sound that is so distinctive of the Impala), it was designed by a German named Goergen, a manufacturer of motor boats of speed, who in those times was collaborating with the company.

In terms of the shape of the deposit, except also distinctive of the Impala, wine determined by economic aspects, because that way cheapens the process of manufacture.

At the end of 1961, while the future Impala was still in the design phase, Oriol Regàs it occurred to him to organise a journey through Africa as a advertising platform, to demonstrate its quality. The initiative is called "Operation Impala", and counted with the sponsorship of Montesa, and of the brand of lubricants, Wynn 's, being the protagonists of five adventurers Catalan: the same Regàs, three expert riders, rally and racing motorcyclists (John" Tei "Elizalde, Rafa Marsans and Enrique Vernis [9]) and the writer Manuel Maristany, who, despite having no experience in the world of motorsport was as a photographer and chronicler. On board three motorcycles of the pre-series of the future Impala, and with a Land Rover as a support vehicle, the five walked in 100 days (January 15 to April 16, 1962), 20,000 km between Cape Town and Tunis.

Having passed this ordeal, the reliability of the new model remained well patent. By the way, the operation inspired Montesa at the time of baptizing the new model, which was presented to the public with this famous name: "Impala".

Finally, the Montesa Impala was presented in society at 18:30 hours on 30 may 1962, getting finally to the sale in the month of June. That same month it published the first report on the new bike the number 20 of the magazine Grand Prix (edited by Philip Millet and Oriol Regàs).

From the time of its marketing, the new model Montesa became a sales success and only in the first year I sold over 11 000 units. That year, 1962, the Impala was awarded the Delta de Oro to the best industrial design. The arguments that the n made worthy were, according to the jury, "their aesthetic beauty, the rational use of materials and their achieved solution utilitarian", virtues that made "the vehicle of best design and concept".
Sporting successes
The Impala Sport 250, winner of the 24 Hours of Montjuïc in 1963
Athletically, the Impala achieved many successes. In his palmares there are many rallies and on road, in regards to the versions of motocross the force victories in this discipline. But its success highlights was without a doubt the absolute victory in two editions of the 24 Hours of Montjuïc: In 1963, the brothers Enrique and Jordi Sirera they got on board of a Impala Sport 250cc, overcoming of step with the record of the trial at the completion of 620 laps of the circuit, covering a total of 2.353,251 Km with an average speed of 98,052 km / h. [14] In 1966, the winners were Josep Maria Busquets, and the Italian, Francesco Villa, which exceeded the barrier of 100 Km / h on average and set a record in 102,047 Km / h.