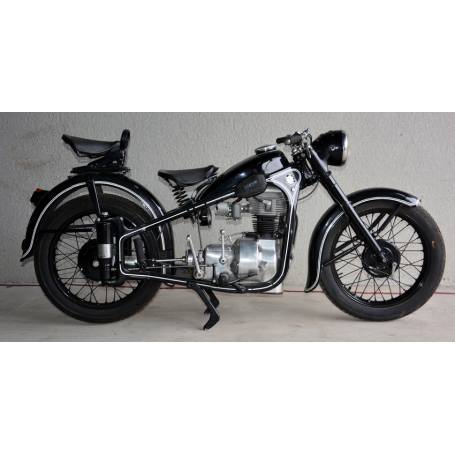 Without the documentation. Such as it is.

We deliver new battery. In a working state.

SEM, Eisenacher Motoren Werk, was a German oriental car and motorbike brand that was in production between 1952 and 1955. The emblem wrote together, which makes name for EISENACHER Motorenwerk. The production took place in Eisenach , Thuringia.

BMW factory 's at Eisenach was taken 07/03/1945 of the Soviet Union, was rescued by appeals to German destruction by the marshal Georgy Zhukov and got 15/09/1946 name Sowjetische AG Maschinenbau Awtovelo, Werk BMW Eisenach. Did förkrigsmodellerna BMW 321 (1945 -1950) and 326 (1946-47). 1949 model BMW 327 and the future flagship of 340. During 1952 also produced 325/2. Finally marketed models also to the west of the Berlin wall. The production of BMW in the Bavarian capital, was weak, and had not the soviet-controlled Eastern Germany the attempt to launch kindly.

The factory was nationalized in 1951 (two years after the formation of the GDR). Then, the BMW Munich the previous year, legally pointed out that the East germans had no rights on the name changed to SEM. Brand are very similar to the BMW, but the blue fields are red mark of the SEM and the ring surrounding it is white in color.

Automotive division of the SEM was reorganized in 1953 in a company folkägt, VEB Automobilwerk Eisenach (AWE). [1] took that year also the production of the factory of Audi IFA F9, which was based on the Auto Union DKW förkrigsmodell F9.

In a couple of books about inspector Martin Beck running Tomstad Larsson a SEM red. In the book The Man-the Abomination (the model of the movie The man on the roof ) has Sjöwall and Wahlöö replaced it with a BMW red in a similar way.

Factory single MC under the brand name SEM R35 and had a single-cylinder engine of 342 cm 3, which, through a transmission-speed lever prepares a line drive in the right-hand side. It was based on army and police motorbike BMW with the same name that you entered in 1937. When the factory in Munich was focused on the development of aviation engines moved the production of motorcycles of BMW in Eisenach. This, however, was in 1940, when the model is not considered that it meets the requirements of the Wehrmacht. After the production of World War II was well again, then the soviets estimated quality brand of motorcycles. In the planned economy were set as goals for the production. 1945 I wanted to have 70 bikes, but only 16 were delivered. 1949 also left people to buy motorcycles, and the production had increased to 4.250. During the last year of the SEM, 1955, was delivered to 13,500 pieces.

In 1952 replaced the SEM front suspension telescopic fork with oil dampening such. 1953 met a rear suspension straight, the frame was extended, and did some minor modifications. Names of the models were R35, R35 / 2 and R35 / 3, but the improvements were floating on the limits of models, so that the variants are numerous.

Between 65,000 and 70,000 R35: or the brands BMW and SEM considered in total have been built in Eisenach, while the equivocal evidence suggests total more than 90,000. The machines are built as reparations to the Soviet Union was often rudimentary items, along with making machines hidden in the mine shaft when the factory was partially destroyed during the Second World War. Despite the planned economy of control apparently lasts never met the objectives, and there are no reliable figures of production for the years 1946-1948.