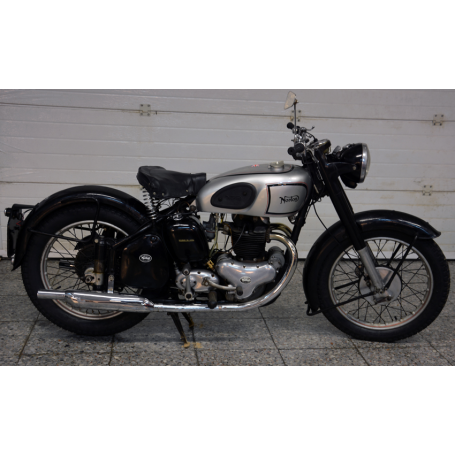 Tuition Historical. Such as it is.

Norton is an iconic british brand of motorcycles, registered as Norton Motorcycles ceased production in the 90s and started again in the year 2008.

History of the brand

James Lansdowne Norton, originarío of Birmingham with only 19 years, founded in 1898, the company Norton Manufacturing Co. with the original goal of producing chains for bicycles. In 1902 the first motorcycle Norton to add to a bike with a small motor on the bottom of the box. In 1908 as a continuation of the first model Norton developed an engine monocilindrico of 633 cc. that would be assembled in five models of the brand enjoying a long life. In 1916, appears for the first time the famous logo of Norton. In 1924, the rider Alec Bennett wins with a Norton the famous race Senior TT that is held annually in the Isle of Man. During the years of the second world war, between 1939 and 1946 there were close to 100,000 units of the brand for their use by the military. In 1952, the pilot Geoff Duke was proclaimed world champion of speed with motorcycles Norton in two categories: 350 cc. and 500 cc. In 1967 was born the legendary model Commando]]. In 1971 comes to market Street Scambler. 1976 marks the beginning of the decline of the brand: does not occur in the model Command, due to recession of the English market and the arrival to Europe of the japanese brands. In 1977, the brand changes hands, with funding from the English government to develop a new rotary engine and apply their developments mechanical to motorcycles and also to small boats and light aircraft. In 1992 Norton expires again in the Senior TT, but despite the sporting success, the stability financial of the brand is low and just about to close the company.

Relaunch of the brand

In October of 2008 was news that the businessman Stuart Garner had purchased the rights to the Norton brand and was riding a new factory and offices in the area of Donington. After the rumors about the company's work on a bike for the street that would bear the name of Commando this was finally presented in public as a prototype at various trade fairs. The manufacture of the final model called the Commando 961 IS limited to 200 began in September 2009 and will be on sale in 2010. This model is a Cafe Racer style. Described by experts as an authentic marvel of aesthetics, is a model manufactured by hand and with components of first level (suspensions Öhlins, Brembo brakes, carbon wheels from BST). Likely to surpass the 20,000 € of the PRICE, although this is only a speculation. The brand ensures that later will manufacture a standard version with economic components to reach the public at large.

Norton in the competition

The Norton perhaps the most famous of all time: The Manx 500 racing-client, here is a copy of 1957

But the news of the pump associated with the brand is that for the year 2009 intended to return to compete in the TT of the Isle of Man with a version of the Norton F1 rotary engine called the NRV588. Steve Hislop won the TT in 1992 on a Norton rotary engine, and since then the british brand has not returned to participate in the race. Now Michael Dunlop, the son twenty-year-old Robert Dunlop, is the rider chosen to ride this bike and 'greening' the laurels achieved with the Norton JPS. I would like to get the successes it has reaped Triumph in its rebirth, more than anything by having some other bike british in the market to remember the old struggles between Bonnies and Commandos on the road to Thruxton in England. Does anyone give more?