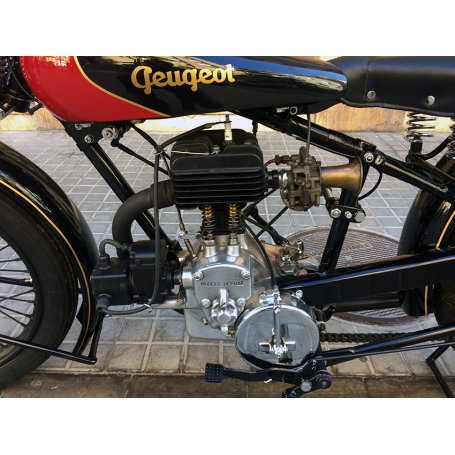 Without the documentation. Bill of sale. Engine: 225cc.

With all the guarantees. Completely restored.

In 1926 the group Peugeot came down again when "Les fils de Peugeot Frères", the part of the bike of five million French francs sold to the newly-established "Société Anonyme des Cycles Peugeot", including the factory of Beaulieu .

The new company already took in 1927 a new model with engine block in the market, which initially caught 350 M, but soon received the name of P 104. A lot of news was not under the sun: the engine of the side valve was still the Antonesco, and the gearbox was an existing Zedelge design. The machine was heavier and more expensive than the competitors, as though it was under the brand names sisters also Aiglon (504) and fawn (G-504) was released, there were more than 2,000 produced. However, the engineer Milone developed new, lighter four-stroke engines 175 to 250 - and 327 dc, P 109, P 110 and P 111 will hit the market. P 107 and P 108 were 250 cc valve side .

In the thirties , the "Automobile Commission d ' Experimentation du Materiel", was created to examine the vehicles for the military interest in the P 107 as a motor military. Since 1932, this model was delivered to the French army. In 1936, this model as an engine for military followed by the P 112, and from 1939 by the version "All Terrain" TT 112. Peugeot developed in this period, the "Grande Puissance (high power) series with kopklepmotoren , but forced by the effects of the economic depression also, valve side , and even a series of light weights as "BMA".

These models do not develop properly and had to be modified frequently after. Peugeot sold only 3.150 copies. When they met better game engine: in Addition to a good performance in Paris-Nice, Paris-Pyrenees-Paris and the Bol d'or was a converted P-515 three new world records set in 1934.