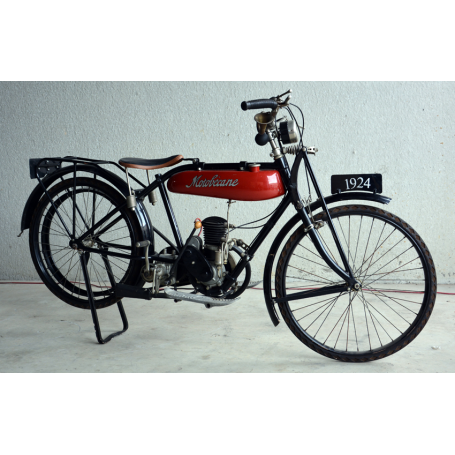 Due to a server error and by fault: the server did not respond.

We take this auction:

MBK (formerly Motobécane-Motoconfort) is a French manufacturer of two-wheeled vehicles , founded in 1924 , now a subsidiary of Yamaha .

1924 : Charles Benoit and Abel Bardin conceive their first motorcycle, the MB1 and, thanks to the financial support, administrative and technical Jules Bénézech December 11, 1924, the workshops of the Motobécane to Pantin are created in the destination Motobécane, a model of the pendulum fork to amortize equipped with a two-stroke engine twin 175 cm3 belt driven. This simple model will be sold until 1929 .

1926 : Creation Motoconfort the brand with the launch of the MC1 308 cm3 - with a plate riveted 'engine patented Motobécane "- this is the first large displacement motorcycle built by the workshops. This brand is also created in order not to jeopardize the success of the new company in case of failure in sales.

1929 : Start of production of the BMA for "bicycle assisted by a motor" equipped with a 2 times 100 cm3 engine. These small machines with foot pedals can drive without a license from the age of 16 years, but not exceeding 30 km / ho weigh more than 30 kg, The first model is called the "B1". The regulatory changes during the occupation and category BMA disappears after the Second World War . New categories day song: motorcycles, less than 125 cm 3 and mopeds, 50 cm3. In ten years, Motobécane produced around 150,000 BMA. In the 1930s, Motobécane is a major manufacturer of motorcycles, with many models of all cars. We even see prototypes of 750 cm3 four-cylinder. Some models also took the name of "Motoconfort" for commercial reasons.

1933 : The company produced its first motorcycle 4-stroke 250 cm3. During this period, a motorcycle with a line of four-cylinder engine is produced in very small quantities.

1946 : introduction of the Z Series Z46C equipped with suspension and engine overthrown, which will be marketed in 1947 .

1964 : Stop the production of the "Z" series. For the first time since its foundation, the company no longer produces motorcycles, but only mopeds and bicycles.

1975 : Motobecane-Motoconfort take control of your competitor velosolex and retrieves its manufacture at one of its factories in Saint-Quentin .

1976 : Return to the unique brand Motobecane with the abandonment of the mark Motoconfort.

1983 : Motobecane in bankruptcy and becomes MBK Industrie following the acquisition by several shareholders, including the global giant Yamaha .

The "star" is the range Motobecane moped , produced from 1949 , and sold 14 million copies, which makes Motobécane's largest manufacturer of motorcycles in the world.

The unit is a great advance, which eliminates the need to pedal.

Part, first, then tubular sheet metal pressed, with the deposit included in the beam front, or in the high position, such as a motorcycle.

The Mobyx is a model for the recreation, its compact dimensions allow it to be hosted on a recreational boat, caravan or car trunk.

The last high-end models designed by the engineer and director of engineering Jaulmes, Eric, 99 -, and Z-95 TT, have a motor with a piston against improving the filling of the cylinder, c is a compressor type.

Attempt of revival in the bike

In 1969 , this Motobécane 125 Standard twin, 2-stroke, is an attempt to return to the monopolized by machinery market in japan. It will be followed by the luxury models, LT, LT1, LT2 and LT3. These machines are distinguished by their alloy engine cylinder coated with hard chromium and aluminium, electronic ignition, suspended from a frame double cradle original, but excellent. With the time the commercial success fades in the face of rapid progress of the aesthetics, the finish and the equipment of the competition is japanese.

125 cm3 Motobécane progressing rapidly on a technical level, the engine power was increased to 16 horsepower of the LT1 with the famous segment on "L" head of the piston ensures a compression ratio of greater than 10/1 against to 6.5 / 1 to the competition with japanese, the improvements in the chassis that the increase in road and comfort. However motorcycles have changed little aesthetic, including the non-renewal of the colors prior to the release of LT3.

The absence of key support and side - that allowed such to differentiate between a "motorcycle" and a moped "and enter the big leagues", as a symbol of the modern motorcycle - make a hole. The little or no change Motobécane has at various points: there are no LEDs in which it operates the home as a dashboard, controls, handlebars have changed little, meter, obsolete, white background, odometer only four digits, baffles exceeding the exhaust pipes, to the mixture before the operation to separate the LT2 compelled to look behind the carbs on the cable clamping lubrication tachometer, because the air filter housing, and located above the sides of the tank and chromium knee flu-equipped kitchen. Motobécane want to the forerunner in many ways (electronic ignition, inherently weak and unreliable, expensive, and irreparable ...). Not having the real investment is demonstrated and the business strategies, that he soon found himself in the back at a moment in which this type of design is falling into disuse before the release of the LT3, too late and too expensive .

The rates of 125 cm3 Motobécane grow faster than the competition, the electronics are not reliable, the excessive prices of the spare parts (clutch cable, in 1977, that takes only 2 000 km, costs 40 USD , 80 Euro 2009 if the price reported from SMIC area) will slowly become the high-125 cm 3 series most expensive in the market.

The project is interesting in order to perpetuate the supports French (Marshall up to the lighthouse, Saker for shanks - already equips the Terrot 1945 - Gurtner carburetor - so complicated and so little tight with a "titillateur" as in 1912 - , riding the last war with handles welded on, while the quick print that flood the market. The end was announced on the placing on the market of the successive models are always late and always handles expensive only certain customers are first-time true (though it is as simple as mopeds are defined in the regulations).

The similarities with the humble moped came to the end of the buyers most courageous that clean the teasing of the girls and guys that roll then Suzuki TS or GT, Yamaha or Honda from all times and always clean. This is the end of a brand that was promised by the lack of responsiveness and the warranty too much, too much dependence of the values and the culture obsolete after excluding the main changes of may 68 .

In 1975 , the output of the LT3 bring about a reformation of aesthetics, front disc brakes, forks Ceriani, a new design of the tank, front fender painted and new gauges and tachometer . This model is available in three colors, blue Pyrenees, orange and green Roussillon Normandy. In 1976 , launches version Motobécane court LT3: pattern cutting of sheet metal, and then in 1977 a statement of polyester. Will be world champion on the track in 1977 .

Motobécane also seek a breakthrough in 350 cm 3 with a three-cylinder two-stroke, five-speed, the models inspired to a large extent Kawasaki presented to classrooms and 1972 in Cologne and Paris. A very high price, a late arrival in the market destroyed the efforts made finishing and design (headlight bi-iodine, 20 liters tank, front disc brake, etc).

At the beginning of the 1980s, Motobécane attempt a foray into the world of the bicycle carrier cross. With MX 41, mini bike for the kids, then the MX 21 and MX 32, the brand will experience a successful one. These bikes in bright colors (blue for the MX 41, MX for lights of neon yellow and neon orange 21 to the MX 32), which include suspensions and central front, plates numbered in the styles of cycles of competition, tires with studs and mounts comfortable. However, the bikes heavy weight prevent them from competing with the true stars of the genre (type BMX), but the line gives a youthful look to the brand.

The acquisition by Yamaha

In 1983 Motobécane is in bankruptcy and Maugendre Xavier, who has just been discharged from Kawasaki to import this brand in France, and the former president of the importers of French Chamber of Association of motorcycles, the buyer is doing some of them associated with the creation of a with a capital of 250,000 francs. The company changed its name to MBK Industrie and after some adventures investors are. MBK Industrie is accused by the government to revive the motorcycle brand French including BFG , which will be developed in the short. The capital is 60% French, 20% of the regional authorities of Picardie. 40% "foreign" remaining are split between Yamaha , Yamaha two importers (Sonauto when you import from another Yamaha France and Ieteren Belgium) and the German manufacturer of two-wheeled vehicles Sachs seeks an outlet for its engines . But the situation of MBK is difficult due to the general fall in the market of mopeds that is not enough to compensate the progress in cycling - including BMX (many titles of Champion of the World) and mountain biking .

In 1986, a capital increase reserved for the most Yamaha's gives the company control of MBK. The situation will improve by the production of the models of Yamaha in Saint-Quentin, part, mostly scooters, are sold in France under the brand MBK.

Not to be confused with MBK Motobecane USA, which imports two-wheelers from Taiwan and China . The two companies are not related, with the exception of the brand both explode.