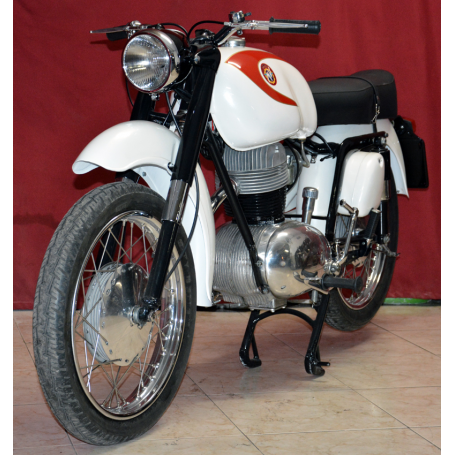 With all the guarantees.

MV Agusta, originally Meccanica Verghera Agusta, is a motorcycle manufacturer founded on 12 February 1945 near Milan in Cascina Costa, Italy. The company began as an offshoot of the Agusta aircraft company formed by Count Giovanni Agusta in 1923. The count died in 1927, leaving the company in the hands of his wife and sons, Domenico, Vincenzo, Mario and Corrado. Count Vincenzo Agusta together with his brother Domenico formed MV Agusta at the end of the Second World War as a means to save the jobs of the employees of the company's Agusta and also to fill the need of the post-war period for, efficient transport cheap. The acronym MV represents Meccanica (mechanics) Verghera, the hamlet where they made the first MVs. The company manufactured small-displacement, café racer motorcycles of the style (mostly 125 to 150 cc) through the 1950s and 1960s. In the decade of 1960, the sales of small motorcycles declined, and MV started producing cycles of increased capacity in smaller amounts. To 250 cc, and later a twin, 350 cc were produced, and a 600 cc four-cylinder evolved into a 750 cc.

Count Vincenzo and Domenico Agusta had a passion for mechanical work and motorcycle racing. Like Enzo Ferrari , they produced and sold motorcycles almost exclusively to fund their efforts of career. They were determined to have the best motorcycle racing GP team in the world and spared no expense on their passion. MV Agusta produced their first prototype, called "Vespa 98", in 1945. After learning that the name had already been registered by Piaggio for its Vespa motorscooter , it was referred to simply by the number "98". In 1948, the company built a 125 cc two-stroke single and entered the Franco Bertoni in the Italian Grand Prix. Bertoni won the event held in Monza and instantly put the new motorcycle manufacturer on the map.

In the season 1949 , the cc, or ultra-lightweight 125 gained new prestige. More motorcycle manufacturers were competing in the World Championships inauguration, which took place in Switzerland, the Netherlands and Italy. The Mondial design 125 cc DOHC dominated the season of 1949. The riders MV placed ninth and tenth in the final classification. In 1950, Arturo Magni and Piero Remor joined the company after working with Gilera . Magni was the chief mechanic and Remor was chief designer. The season of 1950 and 1951 season were development years, as the company adopted the 125 Dohc four-stroke engine. Efforts Racing only produced a fifth place finish at the GP of Netherlands in 1950. The 1951 results were only a little better.

The season of 1952 saw the introduction of telescopic forks, wide hubs with brake full alloy and a fuel tank and stylish on the bike 125 race. Power was 15 BHP (11 kW) to 10.800 rpm. Britain's Cecil Sandford piloted the new MV 125 to a 1952 Isle of Man TT victory and went on to win first MV Agusta world championship .

With the success of the season 1952, the pilots of independent or "privateer", you can now buy a version "catalog" of the 125 DOHC, is now available through the company. The Sport Competizione racer had many of the same features as the moto official. These included a multiplate clutch, oil pump with gear, Dell'orto 27 mm SS1 carburetor and float chamber remote. The bike was nicknamed "The Boy Racer". In 1953 the engineers race adopted the forks of type Earles to help with the problems of management of the corridors of works. The season of 1953 saw the introduction of the 350 Four. Racing efforts in medium-voltage now include 500 cc, 350 cc and 125 cc class.

1953 saw the introduction of a new model of the cc overhead camshaft 175. MV Agusta produced the 175 CST and CSTL (Turismo Lusso) for street use and soon developed a sportier 175 cc with carburetor larger, a cylinder head larger, with bigger fins, aluminum wheel rims and plenty of red paint glossy. The version of first year (1954) of the 175 Sport featured a fuel tank beautifully sculpted that it quickly earned the nickname not the official "Disco Volante" ("flying saucer") as viewed from the front, the shape of the deposit was reminiscent of a flying saucer . Soon after, MV began offering a racing version-limited availability very 175 cc "Super Sport" for the careers of MSDS (club production racing) equipped with unusual fork Earles-design. In 1955, he was replaced by a new and improved model Super Sport with a new radical design and a gearbox of 5 speeds. His design earned him the nickname "Squalo" (Shark). This machine of 175 cc racing was very popular in Britain in the late 1950s to the mid, when tuners learned to be bored out to more than 200 cc capacity. Racers including Micheal O'rourke, Derek Minter , and Bob Keeler raced the 175 and 125 Sport Competizione around Europe with a great success. The marketing strategy of "race on Sunday, sell on Monday" has been respected, and it worked. Motorcycle street MV enjoyed great popularity in the whole of Europe. In 1958 the american David Schuler, walking in the street 175 MV Sport bike borrowed and barely modified, won the class 175 in the famous island of Catalina GP off-road race in California.

After the season of 1957 , the motorcycle manufacturers Italian Gilera, Moto Guzzi and Mondial jointly agreed to withdraw from the competition Grand Prix due to spiralling costs and falling sales. Count Agusta originally agreed to withdraw, but then thought better. MV Agusta went on to dominate the races of Grand Prix, winning 17 consecutive world championships 500 cc . [3] count the competitive nature of Agusta usually saw him hire some of the best pilots of the time, namely Carlo Ubbiali , John Surtees , Mike Hailwood , Giacomo Agostini , Phil Read , among others, and have the best engineers, notably Arturo Magni. The three-and-motorcycles-of-competition of four cylinders were known for their excellent behavior on the road. The racing machines red fire engine became a hallmark of the Great Prizes in the 1960's and early 1970's.

With the death of count Domenico Agusta in 1971, the company lost its guiding force. The company won their last Grand Prix in 1976 and by the Grand Prix of the season racing motorcycle 1980 were out of the competition. Shortly after, they ceased motorcycle production. Between 1948 and 1976 motorcycles MV Agusta had won over 3000 races and 63 world championships overall. After MV Agusta left the racing scene in 1980, Magni started producing his own motorcycles MV custom-framed.

Cagiva bought the name brands MV Agusta in 1991. In 1997 we introduced the first new motorcycle MV Agusta. The new bikes were four-cylinder 750 cc sports machines, the F4 range , which included a series of models of implementation of limited production, such as the black paint model SPR all the work ("Racing special Production"), which appeared in the movie I, Robot . In 2004 they introduced their first motorcycle 1000 cc. The year 2004 marked the end of production of the machines sports 750, with a limited production of 300 SR model (Racing Special) with the distinctive colors of red and silver traditional.

MV Agusta also made a limited series of 750 cc and F4 F4 1000 cc Senna editions in memory of the late champion of Formula One Ayrton Senna , a collector of Ducati and MV Agusta avid, in aid of the Instituto Ayrton Senna, the public charity foundation in Brazil for children and young people. Three hundred of each model were made in the decade of 2000.

They also produce a range of 750 and 910 naked bikes called the Brutale . The production is limited, as it is the policy of the company to produce a machine of elite similar to Ferrari in touring cars. They do not compete directly with japanese manufacturers, whose motorcycles typically sell at considerably lower prices; rather, they compete with other models Italian as Ducati sports bike 's 996 , 998 , 999 , 1098 , and the naked Monster . In 2005 MV Agusta introduced the Tamburini 1000, which bears the name of its creator, Massimo Tamburini , who previously worked for Ducati, where he designed the Ducati 916. Cycle World and australian Motorcycle News magazine named it the best sports bike in the world. Tamburini designed the Ducati 916 sports bike (predecessor of the series 748 and 996), which marked the return of Ducati as a manufacturer of motorcycles with success at the beginning of the TWENTY-first century. The MV Agusta F4 refined the innovative design of the 916. Power Claimed the new model F4 312R is 183 hp (136 kW). In 1999, he restructured the group Cagiva for strategic purposes and MV Agusta become the main division, comprising Cagiva and Husqvarna.

Heavily indebted, the manufacturer was purchased by the automobile manufacturer of Malaysia, proton in December 2004 for € 70 million. In December 2005 Proton sold MV Agusta to GEVI SpA, a Genoa company-based funding in relation to Carige, for a token price of one euro excluding debt. By 2006 GEVI SpA, with 65% of the share capital, had refinanced MV Agusta, allowing the company to continue, in his native Italy.

In July 2007 MV Agusta Motor SpA, sold the Husqvarna brand of motorcycles BMW for an undisclosed amount. According to the president of MV Agusta , Claudio Castiglioni , the sale was a strategic step to concentrate all the resources of the company in order to expand MV Agusta and Cagiva presence in the international markets with more financial resources for the development of new models.

After years of ownership stalled, "art of the motorcycle" at the Guggenheim icon, the model F4, I was ready for an upgrade, but the financial situation of the company is not allowed. On July 11, 2008, Harley-Davidson announced that it had signed a definitive agreement to acquire the MV Agusta Group for US $ 109 million (€ 70m), completing the acquisition, on August 8, 2008.

MV Agusta has announced that during the first three months of 2010 bike sales increased by 50%.

The name of MV Agusta became popular in 1948 when Franco Bertoni won the Italian Grand Prix. Then MV Agusta adopted the commercial slogan: "racing experience at the service of mass production."

The manufacturer initiated a domain in any class in 1956. Won the 125 cc, 250 cc and 500 cc class simultaneously in 1956, 1958, 1959 and 1960. The manufacturer won 270 races of Grand Prix motorcycle racing, with riders such legendary Giacomo Agostini, Mike Hailwood, Phil Read, Carlo Ubbiali, Gary Hocking and John Surtees.

MV Agusta says on its website the US about that period: "Dressed in red and silver, these" machines record invincible took the hearts of all fans sensitive to the charm esoteric of the four-cylinder in-line engine equipped with an extraordinary force largely. underlined by the four exhaust pipes-as a megaphone, responsible for a roar unforgettable and terrifying. Distinctive features that could not remain an exclusive heritage of the fortunate witnesses of that time unforgettable, needed to testify also in the future."

MV Agusta also won races in the famous Tourist Trophy. Giacomo Agostini made his debut Tourist Trophy in 1965 in the Junior class on an MV 350 three-cylinder and finish third. He has participated in 16 races, TT's, all on MV Agustas, he won the race 10 times, 3 times and retired, was on the podium in the other races. He completed a dual senior / junior in 1968, 1969, 1970 and 1972. Mike Hailwood won the Tourist Trophy on a MV Agusta 4 times, 3 in greater Class and 1 in Junior class. John Surtees turned to MV Agusta in 1956 and won the greater Class. In 1958, the Class was over, Junior and Senior, in the first position, a feat he repeated in 1959. He also won the edition of 1960. MV Agusta won the Tourist Trophy 34 times.

Although there was no racing efforts in the factory, the equipment ("corsair") independent ran the F4 750. In 2003 Big Show Racing of Chicago Illinois, the U.S. sent an F4 750 in the Formula USA, Daytona International Speedway 200 Mile Team Challenge. The team placed second overall with riders Larry Denning and Aaron RISINGER ride the bike.

In may 2007, the company confirmed its return to racing in the World Championship of Superbike 2008 . Carl Fogarty 's based in English team Foggy Racing was going to operate the equipment; Fogarty however abandoned the plans to return to the World Superbike Championship due to lack of sponsorship.

MV Agusta F4-RR will compete in the Championship season of British Superbikes 2013 .

MV Agusta F3 675 will be competing in the Supersport World Championship 2013 .