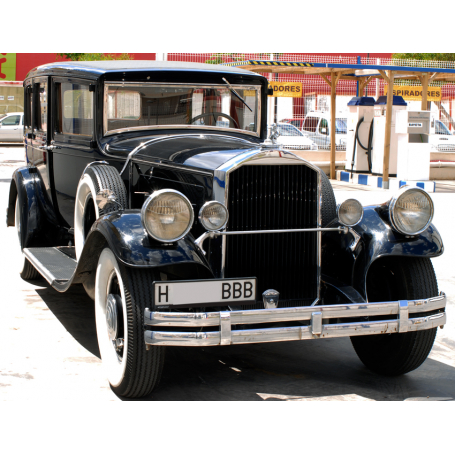 For 1930 Pierce introduced the A, B, C, and models. The A was the larger and more expensive, while the C was the cheapest of the three. Customers have four sizes, distance between axles to choose from, including 132, 134, 139 and 144 inches. The model B can be purchased in two wheelbases, including 139 inches. Three sizes of engine were offered by Pierce during 1930, including a drive from 365 to 6 cubic inches that produces 125 horsepower. This engine can be known in the Model B. The Model A was given a engine 384,8 cubic inches that produces 132 horsepower. The C model has an engine of 340 cubic inches and 115 horsepower. The price was mid - $ 2,600 to a little over $ 8000 of the time.

This particular model B Sedan five passengers, was offered for sale at the automobiles of Amelia 2008 presented by RM Auctions. The estimated value was set at $ 50.000 - $ 75.000. It is finished in black paint with white pin striping. The engine of eight-cylinder L-head is coupled to a manual gearbox of three speeds with mechanical brake in the four wheels that provide braking power. There are parts sidemounted double and a rack trunk on the back. The interior of scarlet mohair and wood trim, newly refinished. The car has travelled a total of 47.791 miles during its useful life.

It is estimated that a total of 3,640 cars Model B was produced in 1930. In this example we found a buyer willing to part with 88,000 dollars including the buyer's premium.

The little time he was married and ten years later after passing through several jobs, partnered with two other local men and formed a company known as Heinz to manufacture refrigerators and other items.

Pierce, remained in the company until 1878, the year in which he left to set for your account under the name of “George N. Pierce & Company”. In 1888 he added to its product catalog a line of tricycles for girls, a product that became very popular at that time.

Shortly after, in 1889, started building a full line of bicycles more hard, with cushion safety for adults.

In 1892 the other product lines had disappeared with the exception of the refrigerators, and in 1895 also ceased to manufacture them, staying exclusively as a manufacturer of bicycles.

The plates that identify their bicycles they looked an arrow, which would become for decades in the seal family brand.

The different improvements applied gradually to its mechanisms, became probably in the best bikes of their time. The model of bike that the company was sold in 1887 was sold for$75.00 p.

In 1901 the “Pierce Cycle Company” had grown enormously and changed the location to much larger premises.

Already, in 1891, the sting for the manufacture of automobiles had been introduced in the company.

In 1899, after a reorganization, George K. Birge, and some friends, bought to Pierce a part of the business, and hired an engineer to scottish David Fergusson.

Missing faith in the vehicles driven by steam, in 1900, the “Motorette” gas was introduced into the market. Two years later, the company manufactured its own engines and a year after it marketed the “Arrow” of 15 horses of power and the “Great Arrow” of 24 horses.

The George N. Pierce & Company built two cars early in 1901, and were exhibited to the public in the exhibition “Pan-American” in conjunction with its line of bikes when it opened its doors on the 1st of may of that same year. The "Motorette" Pierce was powered by an engine Dion of 1 cylinder, and was sold for 950$.

In 1901 and 1902, the company sold almost two dozen cars. In 1903, Pierce replaced the engine Of Dion in the Motorette for one design and own production.

In 1904, Pierce Arrow introduced a 4-cylinder engine that was sold for a$ 4,000. At the beginning of 1905, Pierce Arrow produced some of the cars larger and more expensive in the united States.

The car Pierce Arrow continued to be produced in the same plant street Hanover in the manufactured bikes until 1907, the year in which the company split and the auto production was moved to a new factory built by the architect George Cary to the side of the railroad on the Avenue in Elmwood. This new factory could house up to 10,000 workers.

The motor car of the “Pierce-Arrow Motor Car Co.” was officially launched in 1907.

Carl F. Burgwardt, author of “The bikes of buffalo" and owner of the museum of the history of the bike Pedaling (perhaps the largest museum of bikes in the world), sums up the career of Pierce: actually, George Pierce was probably more of a passionate person for the bikes that a person is passionate about cars. Pierce was the founder and main driver of your business of bikes for over 20 years, and remained in the automobile business only 8. Most of the cars took their brand name and was built from 1911, after it has been removed from the company and after its death. During the time that the cars were produced in its plant of bikes Pierce was a President testimonial and virtually immobile, while other major shareholders (as George Birge) were much more involved with the car. Pierce was mainly concerned with the quality, but was not committed with cars that have not transferred that vocation.

Pierce died of a heart attack in 1910 at his home in Lenox.

Pierce had been associated with George Birge in 1899. Birge was president of the company between 1908 and 1916. Advertising after the victory in a career field through in 1908 led to a sales growth, and in 1909 the company was re-named “Pierce-Arrow” with Birge and its partners as managers.

The prestige of the company continued to grow and in 1909, President Taft requested two “Pierce-Arrow”.

The first establishment of sales of the “Pierce-Arrow” was located at 752-758 main street of Vernor.

The “Pierce-Arrow” was associated with the “Studebaker Corporation in 1928 and a new establishment of sales type “Art Deco” designed by H. E. the Sight, and Associates Harold F. Kellogg, was built between 1929 and 1930 in a corner in a very central Jewett.

Despite the bankruptcy in 1933 of the “Studebaker Corporation”, a group of business men led by the son of George F. Rand, took control of the “Pierce-Arrow”, under the presidency of Arthur J. Chanter kept their activities until 1938, the year in which the “Pierce-Arrow” also broke.