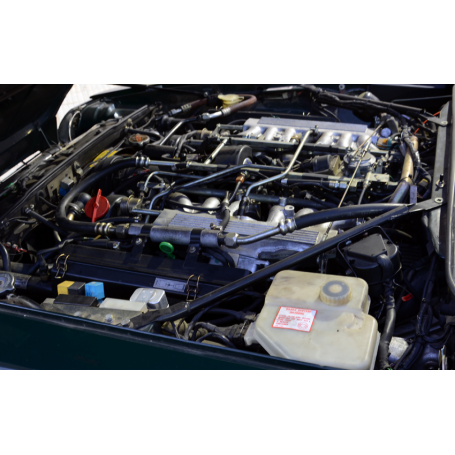 Jaguar XJ-S (below Jaguar XJS) - (XJ27) is a car of great luxury passenger car produced by the manufacturer English Jaguar from 1975 to 1996.

The XJ-S replaced the E-Type in September 1975 and was based on the sedan XJ. Although quite the same image as the sport did not, the XJ-S is a theme of gran turismo XJ-platform.

The XJ-S enjoyed a power worthy of the brand: a gasoline engine V12, with an option of manual transmission (4-speed) or automatic (3 reports), but the manual was soon abandoned. At that time, in the late 1970s, it was rare to see a gran turismo with a V12 engine. There were only luxurious cars Italian sports as Lamborghini, or Ferrari who also benefits from important engine. The specifications of the XJ-S was comparable with them: he was able to accelerate to 97 km / h in 7,8 seconds and a top speed of 229 km / h. These figures will evolve after 1981, and the optimization of engines by a former engineer from Porsche. The maximum speed when going 240 km / h.

Appeared in the middle of a crisis of oil, and criticized its design, the XJ-S has struggled to win a place in the market. On the whole, was very unfavourable for the sports of gran turismo

The first XJ-S appeared in 1975 (but as a model 1976) equipped with a V12 engine offering the choice between manual transmission and automatic. The V12 engines were rare at the time, with the notable exception of prestigious Italian manufacturers like Lamborghini and Ferrari. Jaguar offered the following performance: acceleration from 0 to 60 mph (97 km / h) in 7.8 seconds and a top speed of 229 km / h. The first XJS transmission had a Borg-Warner, replaced in 1979 by a GM Turbo-Hydromatic 400 three reports. The initial period was not favourable: the car appeared in the middle of a crisis of oil and the market was very small for a coupe of turns with a 5.3 L V12 The style was also criticized .. however, Jaguar took advantage of the promotion offered by the television series such boots, Bowler hat and leather (New Avengers) and The return of the Saint return of the Saint). The new avengers Mike Gambit had (Gareth Hunt) who drove an XJ-S. The return of the Holy one showed Simon Templar (played by Ian Ogilvy) driving an early record bearing XJ-S "ST 1". Fifteen years before, Jaguar had declined the offer of the producers of the series "The Saint", that I wanted to use an E-type. In addition, Roger Moore was entrusted with a Volvo P1800.

Towards the end of 1980, some models have been built in the style of the IS 1981, but even with a outside of the years 1975-1980, with stickers of the hydraulic, plastic board painting, leather, GM400 automatic transmission (not reliable), logo Jaguar on the hood, wheels starfish and a tank capacity of 91L. Do not forget that the engine was still the XE (V12 E-Type 1975) could get to 265 HP. In those years was already a lot for a model of GT.
From July 1981, XJ-S hosts under its hood, the new V12 HE (high efficiency motor), which allows to reduce the consumption of fuel, while seeing the increased power to reach 295 horsepower (263 in the market of the united States) . In the same period, the XJ-S has better interior and exterior aesthetic (wheels new alloy, chrome insert in the bumper, the decorations of wood on the dashboard and doors). In 1983, he presented a lively cabriolet with a new 6-cylinder in-line 3.6-liter, the XJ-SC. This model was not a true convertible, but possessed a body type Targa with only two seats. A manual five reports signed Getrag is then available. The XJ-SC will be offered with the V12 of 1985, at the same time, the body Targa was replaced by a true convertible. In 1988 and 1989, a special edition version XJR-S is produced to celebrate the victory of the Jaguar Le Mans 24 hours, which is only sold in the european market. These versions have wheels and suspension adjustments specific. In total, we sold 350 vehicles. Since September 1989 he proposed a V12 was increased to 6 liters and with a electronic management Zytec, the development of 314 and 329 HP. This engine differed from the proposals 6 litres in the last XJ-S. 1130 cars sold well equipped. Jaguar planned to produce a version more luxurious badged Daimler, but only a prototype was made in 1986. In the framework of the series, the craft firm british Lynx will offer conversions of convertible but also a shot of brake (Brake kick) sold under the Name Eventer. This version was built 67 copies.

The car has changed significantly for 1991 (facelift) by Ford and became the XJS (no hyphen). The rear window is enlarged. The 6-cylinder changes to the engine of 4 litres (the vision of the most sought), and comes in convertible, 1992. The V12 is going to 6 liters (304 HP) in may 1993. With the big V12, the automatic transmission was updated with the addition of a fourth overdrive, 6 cylinder retention box ZF4HP24E. The bumpers are more streamlined. In April 1994, the 4-liter improved. The V12 goes away in 1995 (not remaining available under special order). The XJS left ropes, 04 April 1996, after 21 years of production and 113,413 copies sold.