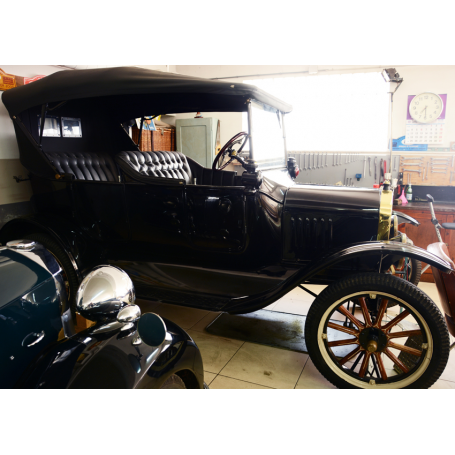 The Ford Model T (colloquially known as the "Ford mustache" in Argentina,1 and as the Tin Lizzie or Flivver in the US) was a low cost automobile produced by the Ford Motor Company of Henry Ford from 1908 to 1927. With the same is introduced to the production chain, catching the acquisition of the automobile.

Henry Ford laid many of the foundations for the future of the automobile when it was decided to apply the theories of Taylor on the perfect combination of man and machine to the new industry of the four wheels. The result would be called the model T Ford. However, the idea of the assembly line had already been presented earlier in 1901, when the industrial Ransom Eli Olds built from 1901 to 1904 on the model Olds Curved Dash, seen after a long time as the first car in the history of the world to be manufactured in series, thanks to the system of assembly line.

"I'm going to build a car for the people, the car universal,"proclaimed Henry Ford in 1906. I didn't have a philanthropic goal. What I was looking for was to increase its clientele to the maximum. The first car Ford dating back to 1903, but the Ford T, appeared in 1908, was the model that caused it to enter the history of the pioneer Detroit. Intended for a rural clientele, it was a very high vehicle, which allowed him to travel the roads of farms and through-trenches -in France it is called the spider-. The roads were very scarce in the vast fields of north America from the beginning of the century, which is still recovering from the wars against the indians, and the attacks on the proceedings. Henry Ford, who was a great admirer of Thomas Edison -the Museum Ford even carries his name-, he became a fervent advocate of the rationalization of work. Their ideal was to turn the worker into a robot. I adopt the theories of Taylor, established the production chain and the multiplication of machines. Both subcontractors and their own colleagues considered him a tyrant, whose lack of the necessary expertise flowed sometimes demands a bit absurd.

Of the assembly line to his leap to fame

While the assembly line was for many years, an invention attributed to Henry Ford, the reality indicates that the first record we have of a automobile produced by this system, dating back to the year 1901, the product of an idea of the industrial Ransom Olds. However, its production was not sufficient as to the idea that he had Ford to popularize the car. So it was that decided to improve the assembly line with a factory rifle and based often on improvisation, to increase the productive capacity of this system. This alternative, brought as a consequence the erroneous attribution final of the invention to Henry Ford, in place of Ransom Olds.

The T was built on these principles and, in addition, Henry Ford was ahead of its rivals, establishing very soon a large network of dealers. An affordable price and a mass-production during a period of almost 20 years made this revolutionary model, a symbol of the great series. Even the nascent film industry took to it, and the T became a vedette of persecutions hilarious in the comic movies of the silent film. We have even seen split in half by a saw that was going on in the middle of its two occupants: The Fat and the Skinny.

As has been previously mentioned, The T-Ford was designed by Henry Ford, began production on August 12, 1908, he came out of the factory on September 27, 1908, and saw the public light on the 1 of October, 1908, with its four-cylinder engine and only 20 Hp of power reached the maximum speed of 71 km/h, with a weight content for its time of 540 kg; he consumed a liter every 5 km

Thanks to the revolution of the previous models, especially the N and its derivatives R and S, Ford became the first american designer since before 1910. Not that it was groundbreaking, but had interesting features for the time. The engine had a cylinder head is removable; the rod was made of steel of vanadium steel, more resistant. The lighting worked with a steering wheel magnetic; the address was on the left, an initiative that would create school. The gearbox of planetary gears had only two speeds and is changed with the foot, specifically with the clutch pedal; in the middle of the tour was the "dead spot", stepping on to fund was the first and, dropping a little, the second.

Engine, 2.9 liters, it only yielded 20 horsepower maximum, but the torque that was provided was high, which gave him a good elasticity at the time of move. Anticipated five versions at launch: convertible-top, and from two to seven seats, but even without doors. At the beginning are proposed three colors; after 1914, only one, the black. The prices ranged from US$800 to US$1000. The daily production of this model T quickly grew to a thousand units and will soon be cuadruplicaría. The outbreak of the First World War meant that these high figures to come down significantly,but returned back with even more force to break a record in 1923; more than 1 800 000 units, which was a third of the world production at that time.

His versatility was enormous. With wheels of large studs, the model T Ford could play in agricultural jobs and the metal wheels allowed it to circulate through the rails of the railway. In total, there were around 15 million units.3

This model was used in Mexico as a vehicle for the police.

The model T included news that other vehicles of the competition did not offer as the steering wheel located on the left side, of great utility for the entry and exit of the occupants. Also incorporated major technical advances as the whole engine block, crankcase and crankshaft in a single unit, using a light alloy and resistant steel of vanadium.

The model T was the first car of the global industry. In the year 1921, nearly 57% of the world production of motor corresponded to the model T Ford, manufactured in several countries, and sold in the five continents through branch offices authorized, in different versions and alternatives of use.

Although Ford achieved international status in 1904 with the founding of Ford of Canada, was in 1911 when the company began to expand rapidly overseas, with the opening of assembly plants in England, Argentina (1912) and France, followed by Denmark (1923), Germany (1925), Austria (1925), and also in south Africa (1924) and Australia (1925) as subsidiaries of Ford of Canada due to the preferential tariffs of the countries of the "Commonwealth" to which they belonged.

At the end of 1913, Ford Motor Co. you decide to install in Buenos Aires, the first branch in Latin america and the second in the world after that of England. In 1917 and after having marketed more than 3500 vehicles starts the import of cars disassembled to be assembled in Buenos Aires.

In 1925 was inaugurated the first plant Ford of Latin america in Argentina, and begins the manufacture of the Ford model T. In 1927 it was produced by the Ford "T" number 100 000. At the end of the year is the Ford "A", successor to the model "T" whose production ends in the united States after 15 007 033 units, an amount surpassed by the Volkswagen beetle on February 17, 1972.

18 other products in the same category