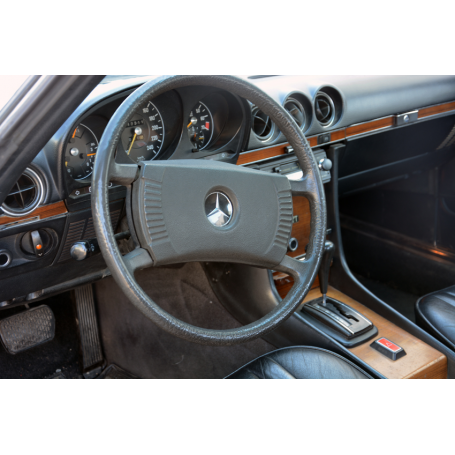 Hard-top in very good condition and soft fabric with wear.

In perfect state of functioning. VIDEO BELOW:

The Mercedes-Benz a-Class SL is a sports car manufactured by the firm Mercedes-Benz from the year 1954. The designation SL derives from the German "Sport Made" (sports light), and was applied for the first time to the 300SL "Gull Wings" (gullwing in English), named for its system of opening of doors.

The term Class SL designates all the variations of the vehicle, including its numerous engines and 6 generations of bodies.

The new model, called the "230SL" (code body - W113), brings with it a new and eye-catching design, low line and large curved windows, a Coupe Roadster whose distinctive roof design earned him the nickname of "Roof of the Pagoda". Around 1968, the engine suffers an increase and the model happens to be the "250SL". So-called "280SL" in the last two years of production, are apparent only minor variations, such as handles or wheels, that happen to have hubcaps closed.

The Class SL R107 was produced from 1971 to 1989, being the second generation most long-lived of the signature, behind the Mercedes-Benz a-Class G.

In 1973, and to respond to the criticisms made to the uncomfortable back seat, it was decided to create a new variant in this sport known as SLC. This new sport combines the body of the convertible, but with a roof, coupe, and more space in its interior, giving the possibility to comfortably hold four people (lengthened by 30 cm more than the convertible for the existence of that possibility). This new sports coupe was manufactured for 9 years with different engines

The models between 86 - 89 included major improvements, such as 4 big brake discs and suspension derived from the W124 Sedan. The body was manufactured and painted with a system designed to protect it from corrosion