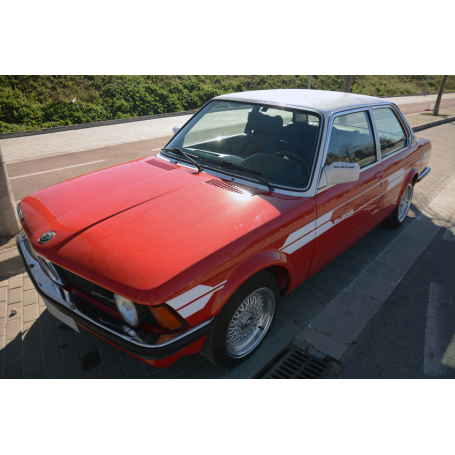 Wheels and original tire blank including:

(the BMW optional by adding 500 euros to the price of adjudication).

Color: Red and white, the interior in leatherette to match in black.

Impeccable. In perfect state of functioning.

The BMW E21 (sold as Series 3) was a tourism of segment D designed by BMW to replace the famous series 2002 as the 1602, el 2002ti o el 2002 Turbo; typical of the 60's and early 70's. In 1975 the car company, Munich Bayerische Motoren Werke AG (BMW) decides to launch this series of cars, though at first with little success as it stepped slightly to the tastes of the time.

Incorporate engines mounted longitudinally, of great hardness, and peculiarly inclined about 20° to the right. Although they are finicky with the carb, especially the Pierburg 2B4 (replaceable by a Weber DGV 32/36) and 4A1 (replaceable by a quad-body V6 engines).

Designed by Baron Alex Von Falkenhausen is the engine used by BMW in the 60's, 70's and 80's with a production that lasted twenty-five years (1962-1987). When you enter the E21 received new devices of power/power and small tweaks of the design, improving the ratio power output/consumption.

This engine is not overly sporty, but in exchange, it supports the treatment, more hard, making it ideal for daily use. Account with a block of four in-line cylinders and eight valves with camshaft driven by chain. Produced with displacements ranging from 1400 to 2000. In the E21 is equipped with a power range going from 75 HP (E21 315) up to 125 HP (E21 320i). While between 1962 and the early years of the E21 with this engine lived in a splendour of gold, from 1978 began its decline confining him inside the most economical models in the range, however, would last ten years more in production to be definitely replaced by the modern M40 and M42.

When adapted to the M10 for the design of the 320i (4 cylinder, 125 HP) was that it was very difficult to carry beyond the M10 while maintaining a durability and reasonable consumption, so that needed a mechanical top. The M10 was planned to reach the 2,000-cm3 (normally accepted as the limit of commercial for the four-cylinder engines). As at the time there was no technology to make a four-cylinder engine more powerful while maintaining the capacity and reliability they opted for a mechanical six-cylinder because it allowed them to achieve displacements and higher yields. It had a inline six that featured in some of the series top (Series 5, 6 and 7), the M30, however this engine is too big and heavy to maintain stability in the simple and lightweight chassis from an E21, so he had to create a new engine. The objective was to design a "6 in line" lightweight and compact, that it was perfectly compatible, in weight and dimensions, with the chassis and the space of the E21, and in addition able to provide the client with models with more than 125 HP.

The project was a success being the 320/6 the second E21 best selling behind the 316. Although this engine was introduced in the 3 Series in 1977, was fully developed during the era E30 from 1983. The success was so rodundo that made this architecture in the most desired in a 3 Series.

The two generations of E21, before and after the introduction of the M20:

For more information and greater accuracy to consult the main articles M10 and M20.

Equipment additional extras that did not come from series

This model was particularly disadvantaged in terms of the standard equipment already which was very poorly equipped.

Also called Overdrive, kept the four relations of the standard box but we added a fifth "superdirecta" to highway without having to rush the engine to go 120 km/h.

It consisted of a box with four relationships are short, and a fifth direct 1:1 with what you'd get performance more sporty. It is mainly used in the 320 and 323i racing or regularly. It is the most quoted today.

The E21, it could be purchased also with a box of 3 gears automatic mechanical operation.

This table lists the whole range of models E21 series were manufactured from 1975 to 1983 with their respective engines, and equipment:

All were produced with the equipment above.

Models sold in the U.S.

Among others, it produced the following special models: