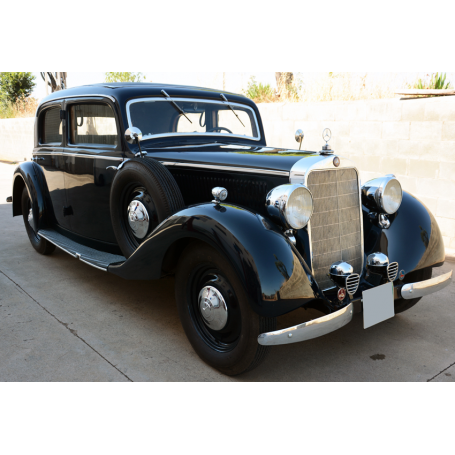 The W143 abbreviation identifies the second game in the Mercedes-Benz 230, a " car of tourism produced high-end of 1937 to 1941, by the German house of Mercedes-Benz .

The 230 was born to replace the previous 230 W21 , which incorporates the framework, born at the turn of a project by Hans Nibel and revised after the death of the latter by Max Sailer that took the place temporarily. The body of the new 230 was wider and longer than the previous model, although the first specimens were born in the framework of a step down from the progenitor.
Only from 1938 came the versions long-distance between axes of the plot. In general, however, the 230 could be offered by the Chamber in more variants of body: everything from classic limousines to the sedan, the sporty roadster two types of convertibles . There were reports of some specimens of 230 sedan body properly modified to assign these specimens to specific uses, such as the intervention of emergency medical.
The 230 was powered by the engine M143 , a 2.2-liter, 55-horsepower, capable of propelling the car to 116 km / h top Speed. In the version with body car discovered, however, the same engine has been object of an intervention of light weight, thanks to which the power reached maximum, 58 HP, with a maximum speed reached 122 km / h.
There were few technical differences between the W143 230 and 230 W21. One of the most obvious was the new gearbox 4-speed (the previous model had a 3-speed transmission with a fourth-speed with overdrive.
They were maintained without changes to the suspension of the front axle with independent wheels with coil sheets and semassi oscillating transverse rear. The braking system was a plumber, the Ate-Lockheed, and it was four drums .
The 230 was the Mercedes-Benz, which marked the beginning of the rivalry of trade with BMW , at the time of a car manufacturer to a young woman with only eight years of activity in the automotive sector, which proposes three models with engines of about two liters, or 320 , 326 and 327 . This rivalry continues today, more than ever, it heats up. But it's also the home of the three-pointed star had an arrow of the race and in 1938, in addition to launching, as mentioned above, the version of long battle, also launched the W153 230 , 230, in practice a more modern system, with a completely new chassis and a new engine of 2.3 liters. Such a model would be produced along with the W143 230 until 1941, when the W143 was taken out of production. At that time, the W153 would be in place of the W143 up within two years, and then it can be considered, in fact, the successor of the W143.
A total of 20,290 copies of 230 products W143.