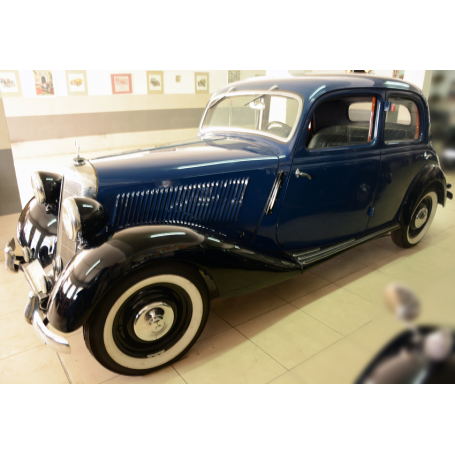 As with the majority of the first models of Mercedes Benz, the 170V was a display of wheels of luxury and class. Reminiscent of the lines of the body of the W15, the V170 carried on to becoming a best selling car. Its versatility was unsurpassed as due to a fuel crisis the Second World War, many models were converted to operate with gas produced by the burning of wood and coal in boats especially designed to be mounted at both ends. We used the resulting gas to power the engine whilst the heat is deflected toward the interior of the car, a solution that is well received in winter. The chassis of the car 4-cylinder survived the Second World War and was later used to rebuild what was left of the company.

1.7-liter four-cylinder rear-wheel-drive Mercedes-Benz 170 V (W136) was introduced in 1936 to replace the 1.7-liter six-cylinder Mercedes-Benz 170 (W15). Despite their engine capabilities similar, side valve of the new car M136 was more powerful. The manual transmission of four was synchronizer speed (having been updated since synchronized in only the two proportions in 1940). Maximum power is claimed was 38 HP (28 kW; 37 HP) at 3,400 rpm with a compression ratio of the initial 6: 1. Mileage was 10 litres per 100 kilometres (28 mpg -imp; 24 mpg -US). The engine was attached using just two mountings and set the standard for the smoothness of the four cylinder engines.

Most of the cars produced, and an even greater proportion of those that survive, were two or four door cars bodywork "limousine" (saloon / sedan, but the range of different body types offered in the 1930s for the 170 V was unusually broad. a four-door "Cabrio-Limousine" combines the four doors of the four door "limousine" with a canvas roof folding full length.

Both the bodies of the doors ground foor were also available tailored for the job of a taxi, with large luggage racks on the rear. There was a two-door, two-seater "Cabriolet A" and a two-door, four-seater "Cabriolet B" both with luggage storage behind the seats and beneath the storage location of the hood when folded (but without any external cover to access the luggage from outside the car). A common feature of the bodies 170 V was external storage of the spare wheel on the rear panel of the car.

The two seater roadster featured a large flap behind the two seats with a partition, back finely upholstered and could use the platform of baggage either as substantial or as a bank very uncomfortable - the so-called mother-in-law seat.

In addition to the wide range of passenger away with body 170 Vs, a small commercial variant was offered as either a flatbed truck or with a box body on the back. special versions of the 170 V were offered, adapted for use as ambulances or by the police, the services of mountain rescue and military.

In the absence of a luxury car in their line-up, Mercedes tried to regain a niche in this market by the introduction of the exclusive 170 S version (W191) 170 V in 1949. It was more luxurious, more expensive and, when it was launched, slightly larger than the 170 V, a distinction the company made an effort to highlight. Although sometimes referred to as today as the first of the S-Class of Mercedes-Benz that still does not exist designation.

In 1951 and 1952 Mercedes-Benz produced a version 170 D OTP for police use. This was actually a convertible, four-door, although the bell was of a material more thin and the basic structure in comparison with the 170 convertibles of the 1930's. It was a requirement that all cars must be painted in "Green Police", but in the end the majority of cars delivered to the police they were painted blue. Despite the fact that the car is provided only for the use of official agencies, that incorporates various features and techniques of the other kind, including for the first time in a car 170 a trunk / boot accessible from the outside via a hinged lid, which soon afterwards appeared on other upgraded W136s.This is one of the models more rare, very few are known to remain in existence, and certainly not completely restored. A single one of them knows that has been carefully restored fully in the united States is the closest to the original factory at present.