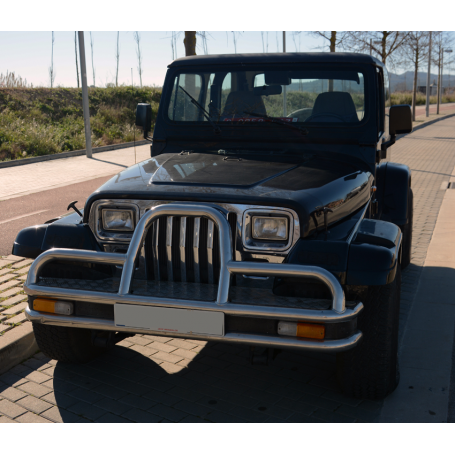 Tuition In German. Documentation in process.

The Jeep YJ, sold as the Wrangler, replaced the much-loved but slower-selling Jeep CJ in 1986 and was built in Brampton, Ontario , Canada , until the plant closed on April 23, 1992. The production was then moved to Toledo, Ohio using the same plant that produced Jeep-Willys during the Second World War. American Motors Corporation (AMC) had designed the new Jeep to be more comfortable on the road in an attempt to attract drivers more everyday. It was a totally new design with a wider track, slightly less ground clearance , and more comfort. The YJ still had suspension leaf spring similar to that of the CJ - however the springs were wider, and the YJs sported bars of track and swaybars to improve the handling. Despite the new grill, the body is very similar to that of the CJ7, and it is interchangeable with some major modifications. The YJ Also was given a windshield larger on the CJ. The YJs are easily identifiable due to the rectangular headlights and the fact that the wipers sit on the windshield giving this version a distinctive look. The blades rested on the windshield due to the arc now more comprehensive of the blades to clean the windshield larger. These two changes were removed later, when the changes TJ was produced in 1996. The 632.231 YJs were built through model year 1995, although it still YJs were produced until mid-1996, bringing the total number of production 685.071 units. Despite its similar look to the Jeep (CJ) its design was new from the ground up and had more in common with the newer model reduced Cherokee (XJ).

The cage was extended in 1992 to allow for shoulder belts and rear antilock brakes were added as an option next year. An automatic transmission option for 4-cylinder Wranglers came in 1994 along with a center high brake light is mounted .

In 1994, the slave cylinder on manual transmissions was moved outside of the bellhousing of the transmission to allow the replacement easier, and in 1995 the Dana 30 is used large universal joints [front axle universal joints (297x) and the pinion rear T-joint ( 1330)]. For model year 1992, the YJ switched to an electronic speedometer, outmoding the cable speedos on older YJs. 1995 was the only model year to have the frame and body fully galvanised.

There were No 1996 model year Jeep Wranglers. YJs produced in early 1996 were sold 1.995 years as a model, but offered a few new parts not seen on any YJ before. This included the new TJ bumpstops on the hood (rubber boots vs the traditional U-bars), hinges of the tailgate reinforced, and some even had bumpers TJ rear. Some also got the I6 newly tuned that was designed to run quieter in preparation for the TJ.

Top options for YJ were the same as those offered on TJ. A soft cover with "door media", which include windows zip soft plastic came standard (windows could be removed completely from these doors). Doors Full-frame with windows of conventional glass were optional in models of soft-top. Hard cover with rear wiper and defroster were optional but came standard with full doors framed. The YJ featured large mirrors with adjustable arms manually in the models-half of the door, while the doors full framed were mirrors adjustable smaller with the fixed arms (which were mounted further away from the corner of the door, in comparison with the mirrors style larger). Depending on year and interior color, Jeeps could be had with the top colors in black, white, brown and grey. Roll-bar padding normally matched with the top color, with the exception of white shirts.

Many tourist destinations implemented the YJ is their choice for pulling their boardwalk tram cars. For example, Ocean City, Maryland used white editions islander YJ that is modified slightly to pull a series of cars of a tram . Said Jeeps were powered by the 2.5 L Power Tech I4 engine and automatic transmission . In 2003, the use of these YJ is suspended and is replaced by more traditional tram Industries vehicles 6000 Series. In 2013, one of these vehicles caught fire and was replaced by a white 2013 JK Sport with the 3.6-liter Pentastar V6 and automatic transmission , once it has been modified to pull a series of cars of a tram . The city also announced that it will gradually replace all of their tram vehicles with Wrangler JK's, since they are the vehicles more cost-effective and economic, as well as the vehicles with the best turning radius that is required to complete the great change in each end of the promenade.

From 1988 to 1993 Jeep produced an option package known as the "islander". Is offered several colors, such as bright red, blue Pacific, Sunset yellow, teal and white, and is offered both engines. Features of the package are the following:

From 1991 until 1994, Jeep produced an option package on the YJ Wrangler listed as the "renegade Decor Group". Vehicles were shipped as optioned Wranglers to american specialty Cars (ASC) in the Detroit area, where we installed the decor package Renegade, then shipped back to Jeep for delivery to dealers. Renegades all have a small sticker on the driver's side door, right above the latch denoting the visit to ASC. Initially, all Renegades were White, Black or Red. In 1992, it was added Blue, in 1993, bronze. The decor Group Renegade was an option of $ 4,266.00 in a Wrangler based in 1991 and included alloy wheels special, flares body exclusive, along with many other features.

A hard top was an option of $ 923.00, and came with a rear window defroster is mandatory to 164,00 usd. Although the models soft-top came standard with "door media", framed doors complete with glass windows were an option, and as with all Wranglers, 6-cylinder, air-conditioning was also an option. Renegades typically had the steering wheel positions ($ 130.00) and an AM / FM radio / cassette stereo ($ 264.00). A change of column automatic was also an available option, but was not popular.

A cassette player, rear sound bar and speaker cloth high-back bucket seats were standard, and the air-conditioning and alloy wheels were available in this model. Red and orange decals 'Rio Grande' adorned both rear fenders.