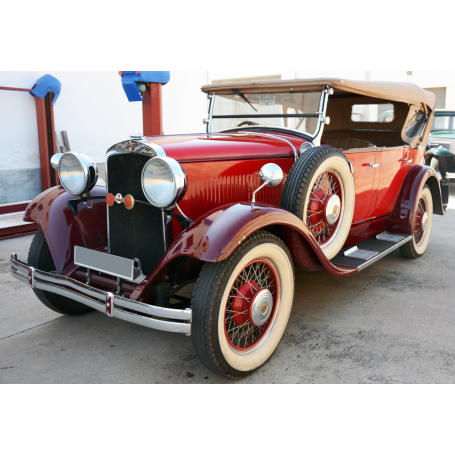 Dodge is a brand of american car, originally named Dodge Brothers Motor Vehicle Company (1914-1927). Chrysler acquired the company Dodge in 1928 which remains part of the FCA US LLC.2

In 1901, John Francis Dodge and Horace Elgin Dodge moved their factory Brothers Bicycle & Machine Factory to Detroit (Michigan, united States) from Windsor (Ontario, Canada), where they built parts for automobiles. Their bearings and other parts were in demand with the early automobile industry and helped in the design of engine parts for early cars Oldsmobile.

In 1902, the Brothers Dodge are joined Henry Ford, who sought help to fund their own car company. They helped at the beginning of the Ford Motor Company as well as in the manufacture of parts for early Ford, achieving a mutual benefit for both Ford as the Brothers Dodge. Already in 1913, almost all the parts from Ford (chassis, suspension, brakes, engines, transmissions, etc) were built by Dodge.

In 1914, the Brothers Dodge launched his own car company, which they named the Dodge Brothers Motor Vehicle Company, choosing 50 dealers initially for hundreds of applications, some of which continue today. In that first year, Dodge introduced the "Old Betsy", a car built to be reliable and long lasting. In that year, Dodge built a total of 249 new cars. In 1917, the Brothers Dodge started to build engines for trucks, in principle, for the use of the Army of the united States during the First World War, and at the end of the war so commercial.

In 1925, the Dodge Brothers Company was purchased by Dillon, Read & Company for about 148 million u.s. dollars, which, as he says, was the cash transaction largest in history up to that time. Dillon Read in turn sold Dodge to the Company Chrysler the 31 of July of 1928. Dodge also gained a lot of importance from the 80's onwards with a series of commercial strategies and mechanics that did increase the quality of your models as much as versatility as your security. Chrysler adopted many models, such as the Voyager, Neon...

After Chrysler took possession of the English group Rootes, Simca of France and Barreiros in Spain, and the establishment resulting from Chrysler in Europe at the end of the sixties, the Dodge brand was used on light commercial vehicles, for the most part in the so-called initially Commer or Karrier (subsidiary of Rootes), in the version of the Simca 1100, on the Dodge Dart Spanish, and in heavy-duty vehicles built in Spain. The most known were the series Dodge 50, widely used by enterprises of public service and military, but rarely considered outside of the United Kingdom, and the constructions of Spanish heavy series 300 available as the off-road 4x2, 6x4, 8x2, and 8x4, as well as the trucks semi-trailer. All of them were also sold in export markets such as Fargo or De Soto.

In 1977 Chrysler Europe collapses, and the sale of its assets to the factories Peugeot, the Dodge british and Spanish, where it quickly became the Industry of Vehicles Renault, which renovated gradually to Renault the range of vans and trucks in the 80's, dropping the usual production on set and using the facilities to produce engines in the Uk and some models of trucks Renault in spain. Dodge would not return to the Uk until the introduction of the Dodge Neon SRT-4, so-called Chrysler Neon, in the mid 2000's. Continued with the appearance of the Caliber, and they began to sell more models like the Dodge Nitro or the Avenger.

However, since taking control of Fiat S. p. A. on Chrysler Group LLC, the Dodge brand is leaving the european market, being since 2011, it has sold some of its cars under the brand Fiat. The first model of this new commercial strategy is the Fiat Freemont, the brother of the Dodge Journey, both assembled in Mexico, with a slight redesign adapted to the european market.

Dodge as a brand of DaimlerChrysler

Dodge was a part of DaimlerChrysler AG, based in Stuttgart (Germany). Since 2005, the Dodge brand has been known for its suvs, which make up 78% of the division's sales. Dodge tries to change this with the introduction of the new Dodge Charger and the Dodge Challenger.

The Dodge brand was reintroduced in Europe in 2006. Currently, the Dodge Viper SRT-10 (sold as the Dodge SRT-10 in the uk), Dodge Ram, and the Dodge Caliber are the only vehicles Dodge in that market. The Dodge Nitro and Dodge Avenger began to be sold in mid-2007.

Dodge re-entered recently in the australian market in 2006 after an absence of 30 years. The plans of Dodge Australia are to launch a new model every six months over the next three years, plans to capture the interest for the brand. The first of these models is the Dodge Caliber, which was well received in the Salon of the Car of Melbourne, 2006.

Dodge vehicles are now available in many countries of the world. In 2006, Dodge sold more than 1.3 million vehicles in the global market. In spring 2007, DaimlerChrysler reached an agreement with Cerberus Capital Management L. P. for the sale of the subsidiary the Chrysler Group, which is part of the split Dodge.

Thanks to an agreement between Dodge and Kia Motors, Dodge marketed from 2001 until the beginning of 2014, three models of cars Hyundai in Mexico: the Hyundai Accent, whose second generation is sold as the Verna by Dodge, the third as Dodge Attitude , and the fourth as the Dodge Breeze; Hyundai Atos, as Atos by Dodge; and Hyundai H100, known as Dodge H100. These models were sold exclusively to Mexico by the dealers of Dodge.