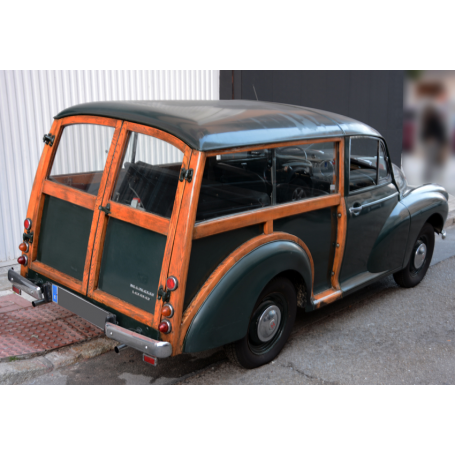 Matching Interior. In their original state. Such as it is.

The child was a "car of tourism produced by Morris from 1 thousand nine hundred and twenty-eight to 1934 and from 1,948 to one thousand nine hundred seventy-one. Because Morris was part of the BMC, the model has been the subject of engineering badge, and was also produced with the name of Austin 6cwt. The minor was the first british car to reach one million units produced

The first series of Minors, produced from 1928 to 1934, was available in two versions. 1928 one thousand nine hundred and thirty-two the model had in fact installed a engine in-line four cylinder 847 cm3 displacement with the distribution of the SOHC. In the wake of the child is supplied with a motor similar, but valves in head. The first type is met 39,087 units, while the second 47231. In total, in this series, there was 86,318 copies. This first generation of Children is marketed in response to the success of 'Austin 7, and was placed in the market share of small cars, which was created by the model of Austin cited. Although Morris had the production plant located in Cowley, near Oxford, the chassis and powertrain were carried out by a subsidiary company, the e. g. Wrigley of Birmingham. Production ended in 1934, and this first model of the series was replaced by the Morris Eight.

Ornament of a Morris Minor

The juvenile was re-introduced in 1948. This new series was introduced to the public at the motor show London on 20 September quoted the year. Designed by Alec Issigonis, this renovated Less is produced three series: the MM (1948), the series II (1952) and 1000 (1956). In total, these three generations, there were 1,368,291 copies, that were gathered together England and Australia. This new generation he belonged to the category of compact cars, and is replaced by the Morris Eight. This model Issigonis combines a luxury relative, with the reliability of a car that was placed in the market at an affordable price. It also has good conduction properties, even in the curves. The prototype of the Issigonis Morris Minor was called Mosquito [6]. This series of Minor was the first british model to reach the million units sold and exported to throughout the world in many variations. The internal policies of the BMC, which is the group that owned the trademark Morris, led to a limited expansion of the model in North America. The production started in England in Cowley, and was transferred to Birmingham.

This series of Minor was called an example of "what is English (which in Italian, can be translated into" the representative of the English par excellence ") and the british icon.

The model, with a front engine and rear-wheel drive, it definitely ceased to occur in 1971 and was replaced by Morris in 1100 and Marina Morris. The last Morris Minor, a commercial version, was assembled in Nelson, New Zealand, in 1974.

Minor was introduced for the first time in 1928. The engine is based on engines similar to Wolseley. Was almost completely redesigned, and it was much smaller than any other engine in the market at the time of Wolseley. Was the owner of a single carburetor YOUR, OHV and 'power to the coil. The engine produces 20 horsepower at 4,000 rpm. Maximum speed of the vehicle was 55 km / h. The 'electrical system was 6 V.

The framework was made of steel and the suspensions were of the leaf spring on four wheels, with a live axle will be the "front end to the rear axle. The brakes, the agents are also on all four wheels, operated via a cable. Initially, the only body available was sedan and torpedoes. At the launch at the London motor show in 1928, the sedan which costs 135 pounds, while the torpedo 125 pounds. The steel body was introduced in 1930.

The engine suffered of infiltration of oil in the dynamo, and then in 1931 was revised. Now the valves were side, and the power was almost the same, that is to say 19 HP at 4,000 rpm. Initially, the two versions of the engines were sold at the same time; until 1932, in fact, the engines of valves at the head were mounted are still in the models with four doors. In the same year, we introduced the hydraulic brakes and the distinguished Child of 'Austin 7, which in its place was installed the brake cable actuated. The low cost of the engine permits the marketing of a version of two doors .

In 1932, the model was subjected to a restyling which involves the line of the body, which became more rounded. On this occasion, the fuel tank has been moved out of the area in the vicinity of the windshield (under the hood of the engine), to the rear of the car. Installed an electric pump. In 1933, a change replaced the previous four-speed transmission with three speeds, at least in the more expensive models. In 1934 they were available reports synchronized to the highest gear.

This first series of the minor was replaced by the Morris Eight in 1.934. In 1948, he introduced a new Minor, this time designed by Alec Issigonis.

The second series of Children, called MM Smaller, it was in production from 1,948 thousand to 1953 and was produced in Oxford. It offers a version of four-seater, with the body of a sedan or two-door (since 1950) and four-door and two-door roadster. The front suspension torsion bar, and the monocoque construction were shared with the larger Morris Oxford. Although the engine compartment of the MM Minor had been designed to accommodate an engine horizontally opposed, at the end, during a stage of the development of the car, it was decided to equip the vehicle with a motor in-line four-cylinder 918 cm 3 displacement and valve side. This engine produces 27,5 BHP of power and 53 N • m) of torque, allowing the model to reach 103 km / h. The average consumption was 7.1 L / 100 km The brakes are drum on all four wheels [10].

The first units were owners of a section of painted center bumper to differentiate the production car from the prototypes. The export to the united States began in 1949 thanks to the movement of the lights in the front grill, on the top of the fender. This was due to the model comply with the laws of local security. In 1950 appeared a version of four-door, initially directed to exports, which was the owner of the headlights placed as mentioned above. This provision of lighthouses became common in all the MM Lower, 1951. From the beginning, the MM Lower had the turn signal bar in place of light, and this feature was maintained up to 1.961 [1].

An innovation of the late fifties was the water pump, which replaced the system of gravity. This allowed Morris to offer, among the options, the "warming of the passenger.

Unlike the engine in the previous series, that was a valve from the side, this new engine was the valves in the head. This engine was designed for the Austin A30, but also put at the disposal of the mark Morris after the two car companies merged into BMC.

In addition to the organs that are available for the previous series, it introduced a version of the family, known as travelers. In addition to this, offered versions truck and van. I had an external structure in The Traveller of ashes, and two doors rear -hinged side. This part of the wood was not painted, but glazed.

The grille was modified in October of one thousand nine hundred and fifty-four. The occasion will be installed a new dashboard with a central speedometer.

This series of Children are met in Oxford and Birmingham.

The model has been updated again in 1956. On this occasion, the engine displacement was increased to 948 cm 3. In addition, this engine was the in-line four-cylinder. The windshield, which was formed previously by two parts, now was bent and formed from a single piece. The rear window was enlarged. In 1961 the turn signals are replaced with the stick of flashing lights classic. These were colored red in the rear (used a filament of the brake lights) and the white forecarriage (these in place benefits of a filament of the headlights). This was legal in the Uk and in many other markets, such as in New Zealand. A version of higher-level, derived from the minor, he was placed as Riley One-Point-Five and Wolseley 1500. A version of that was, however, produced by BMC Australia as the Morris Major and Austin Lancer.

In 1962 he updated the model. Although the name Minor of 1,000 had been maintained, the changes were such, that determines the application of a new internal name (ADO 59). The engine was updated, and now had a cubic capacity of 1.098 cm3 due to the increase of strokes and 'boring. The fuel consumption increases, but also increased the maximum speed, which is now played 124 km / h. It has also updated the dashboard, and the dashboard and 'heating system.

This series of Children are met in Oxford and Birmingham.

On the basis Minor 1000 convertible sports convertible Kilo Sports Tourer, built under license from the parent company in a few specialist workshops authorised in Cornwall. It was a series of 14 numbered copies on order, with several options optional (from the windows, the roof, the interior, the instruments). The engine came from the sister Marina of mini cooper 1275cc or 1350cc. The dry weight was 560 kg with a power of 100 HP at just under. The two-seater drew lines 30 and due to its low position was practical and with good acceleration. The original prototype of a single level known resides in the museum of Boadmin in Cornwall.

In February one thousand nine hundred and sixty and a Morris Minor became the first british model to sell more than a million copies. To commemorate the milestone, we prepared a special series of 350 specimens of two ports (one for each distributor british Morris), which are characterized by having the word "Minor 1000000" placed laterally on the hood, in replacement of the word "standard" Minor 1000 ". The minor million was donated nations of the Union of british journalists with the aim of putting it to auction. The proceeds went to a fund for the orphans and widows.

The decline and replacement

During the period in which they occurred to the model, the sales fell steadily. The last convertible was produced on 18 August 1969 while the last sedan was mounted the following year. The production of the family and the commercial versions ceased in 1971, at least in the Uk, although specimens of all models were available in the showrooms until end of stock. However, the last Morris Minor, a commercial version, was assembled in Nelson, New Zealand, in 1974.

The lower was replaced officially by the Navy Morris, which was developed as a response to the Ford Escort. In practice, however, the successor model was the BMC Ado 16, as it was in the same market segment of the Minor.