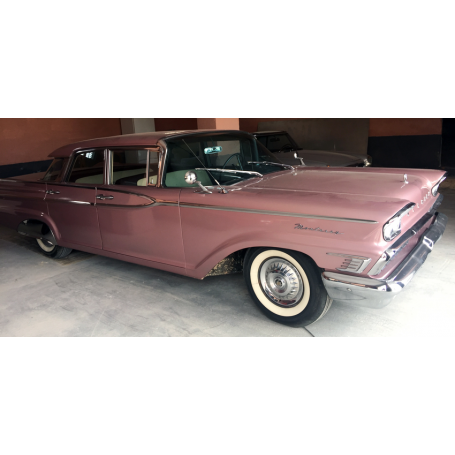 The Mercury Monterey is a car model of size full that was submitted for Mercury in 1952. Would later share the same body style with the Marquis a little more upscale, and the Park Lane and Montclair until the last two died out after the model year 1968 . The body of the Marquis-Monterey was built on a longer wheelbase and had a body more long than Ford LTD , Ford Galaxie , and Ford Custom . During its production, the Monterey served as the Mercury high-performance, mid-range and entry-level on several occasions throughout his tour. It was the only Mercury in continuous production throughout the 1960s.

After model year 1974, the Monterey was discontinued due to Mercury streamlined its offerings of full-size up to the plate of identification of the Marquis. From 2004 to 2007, the nameplate was revived for a minivan, the counterpart to the Ford Freestar .

The Monterey (model 72C) was introduced in 1950 as a two door coupe top of the range as part of the Mercury Eight in the same vein as the Ford Crestliner , the coupe LincolnLido and the coupe Lincoln CosmopolitanCapri to compete with the coupes of hardtop queGeneral Motors had introduced the model year earlier. Montereys had a top canvas cover for $ 2146 or vinyl for $ 2157. Standard features include seats clad in leather upholstery, simulated leather, wool carpets, moldings, trim interior chrome, dash, two-tone steering wheel, black special, skirts of fenders, dual outside rearview mirror, cubrecubiertas full trim and with a hood of gold. For $ 10 more all leather seats were an option. It offered two special colors: turquoise blue with blue top and dark red cortaro metallic with part black top. Black with yellow top was also available. Few Montereys were sold.