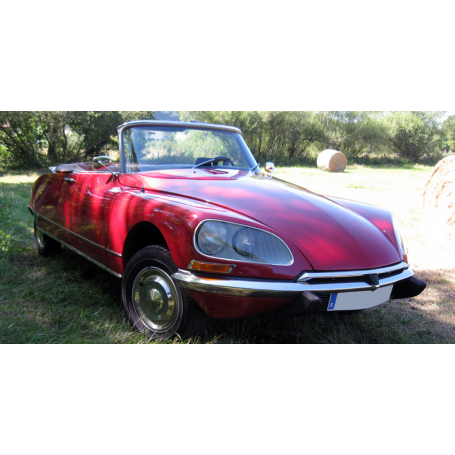 The Citroën DS is a four-door, front-engine, manufactured and marketed by the French company Citroën 1955-1975 in the sedan, wagon / estate, and configurations of convertible body; Designed by the Italian sculptor and industrial designer Flaminio Bertoni and the French aeronautical engineer André Lefèbvre ; and known for its futuristic, aerodynamic body and the innovative technology - including a hydro-pneumatic suspension with self-leveling .

The DS set new standards in ride quality , handling and braking. Citroën sold nearly 1.5 million D-series during 20 years of broadcast production model. The DS came in third in the 1999 car of the century, the recognition of the designs of cars world's most influential, and was named the most beautiful car of all time by the magazine Classic & Sports Car .

The DS was primarily manufactured in Paris, with other manufacturing facilities in the United Kingdom, south Africa, the former Yugoslavia (mostly Break Ambulances), and Australia.

Australia constructed their own D variant in the 1960s at Heidelberg, Victoria , identified as the ID 19 "Parisienne". the cars-australian market were fitted with options as standard equipment, such as the "Dspecial DeLuxe" that were not available in Europe domestic models.

Until the 1965 cars were assembled at the manufacturer's Slough premises, to the west of London, using a combination of French made semi CKD kits and components of local origin, some of them machined on site. An electrical system French replaced the british in the cars Slough in 1962, giving rise to a change to "continental" with connection to earth. After you imported the 1965 cars for the british market fully mounted French factory of the company. The car manufacturing british are distinguished by their leather seats, wooden boards, and (on cars pre-1962) Luke power -fact.

In 1967, the DS and ID was again restyled, by Robert Opron, stylist of the later SM. This version had a more streamlined headlight design, giving the car a particular aspect of shark-like. This design had four headlights under a canopy of glass smooth, and the inner spool is rotated with the steering wheel. This allowed the driver to see "around" turns, especially valuable on twisting roads driven at high speed on the night.

However, this feature was not allowed in the U.S. at the time (see World Forum for Harmonization of Vehicle Regulations ), so a version with four exposed headlamps that did not swivel was made for the us market.

The edition station wagon, the Break (called Safari ID in the Uk market) and "Automobile", has also been updated. The hydraulic fluid changed to the technically superior LHM (Liquide Hydraulique mineral) in all markets except in the US, where the change did not occur until January of 1969.

Most rare and collectible of all the variants of the DS, a convertible was offered from 1958 until 1973, The Cabriolet d Usine (convertible built in the factory) were built in small series by French carrossier Henri Chapron , for the network of dealers of Citroen. These convertible DS used a special frame that was reinforced in the stringers and box bearing swingarm rear suspension, similar, but not identical to the break (Station Wagon) frame.

In addition, Chapron also produced a few coupés, non-works convertibles and special sedans (including the "Prestige", same wheelbase, but with a center divider, and the "Lorraine" of three volumes ).

Between 1959 and 1964, Hector Bossaert produced a coupé on a chassis shortened DS by 18 ½ inches (470mm). While the front remained unchanged, the rear end shows the style of three volumes .

In 1965, noted American customizer car Gene Winfield created the Reactor, a two-seat Citroen DS with a turbocharged 180 horsepower Corvair engine that drives the front wheels, and an aluminum body aerodynamic. This vehicle was seen in tv programs of the era , such as Batman episodes 110 ("crimes feline fun") and 111 (driven by Catwoman Eartha Kitt ), and Bewitched , which devoted the episode 3.19 ("Super Car") to the reactor.

In a hydropneumatic suspension system, each wheel is connected, not to a spring, but to a hydraulic suspension that consists of a hydraulic accumulator sphere of about 12 cm in diameter that contains pressurized nitrogen , a cylinder containing hydraulic fluid screwed to the field of suspension, a piston inside the cylinder connected by levers to the suspension itself, and a valve damping between the piston and the sphere. A membrane in the sphere prevented the nitrogen from escaping. The motion of the wheels translated to a motion of the piston, which acts on the oil in the cushion of nitrogen and provided the spring effect. The valve took place of the shock absorber in conventional suspensions. The hydraulic cylinder is fed with hydraulic fluid from the pressure vessel through a checker of height, a valve controlled by the average position of the anti-roll bar connected to the shaft. If the suspension was too low, the automatic height introduces fluid at high pressure; if too high, releases of new fluid to the fluid reservoir. In this way, it maintained a constant height. A control in the cab allows the driver to select one of five heights : normal height for driving, two levels of driving slightly higher for the poor terrain, and two extreme positions for changing wheels. (The correct term, oleoneumático (oil-air), has never gained widespread use. Hydropneumatic (water-air) continues to be overwhelmingly preferred.)

The DS didn't have a jack to lift the car off the ground. In contrast, the hydraulic system to activate changes of wheels with the aid of a simple adjustable support. To change a flat tire, you could adjust the suspension to its highest setting, insert the support peg in a special near the flat tyre then readjust the suspension to its lowest setting. The prick then retract upwards and float above the ground, ready to be changed. This system, which is used on the SM also, was superseded on the CX by a screw jack that after the suspension was raised to the high position lifted the tire clear of the ground. The system DS, while impressive to use, sometimes dropped the car suddenly, especially if the support is not placed precisely or the ground was soft or uneven.