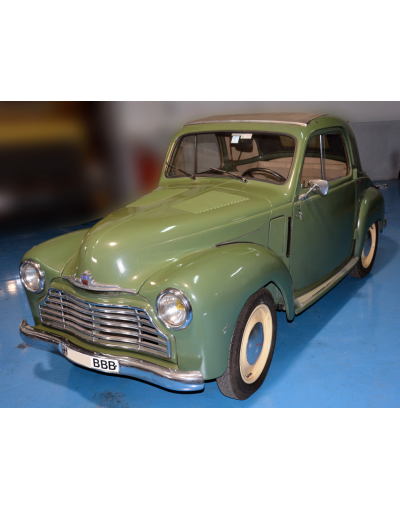 The Société Industrielle de Mécanique et CAROSSERIE Automobile, known as SIMCA, it was a French manufacturer of automobiles. The company was founded in 1934 by Fiat to manufacture vehicles under license in France. After the Second World War have been added to models own. Later, he took charge of Simca Automobiles Talbot and began a partnership with Chrysler , which culminated in 1971 in a takeover by the american manufacturer. After the seizure of power in 1978 with Peugeot , the brand Simca was abandoned.

SIMCA was in 1934 by Henri Théodore Pigozzi founded in 1935 and produced in France Nanterre FIAT Vehicles in Stock : In the first place, the Fiat 500 Topolino , in France as the Simca 5 was expelled, and then to 1950, more models, Simca 8 and 6 Simca FIAT received. . by the actions licenses Simca During the Second World War built Simca in the name of the German occupation forces, among other parts for the NSU - Kettenkrad .

In 1952 Simca production of tractors, MAP , 1954, Simca of France to Ford , the automobile factory in Poissy , near Paris, and built this in 1957, at the automobile manufacturing plant then the most modern of Europe has to offer. Ford received for the sale of its French subsidiary, along with their French models in exchange for 15% of the shares Simca. The previous models of Ford Vedette Comete and ran out of there, under the name of Simca Vedette and Simca Comete Monte Carlo more away from the band. The Ford truck Charge F798WM was 1955 Simca Charge . The Simca Comete Monte Carlo is already set a year later, the Star - like Chambord, Marly and Pésidence offered - was made in 1961 as a great Simca-model in the luxury class in France. In Brazil , the model was then up to the end of the decade of the 1960s the band. With the purchase of the factory of Poissy and the additional production of the former Ford models Simca displaced Peugeot from the third place in the French car maker, and then took Renault a place alongside the Citroën one. The truck factory was through the cooperation with Unic operated.

1958 bought Chrysler US is still in the possession of Ford U.S., 15% of the shares Simca. In the same way, he took charge of Chrysler Unic and merged as a division of commercial vehicles of Simca, so the models of trucks of France will only be sold as a Unic. Chrysler Simca took over in 1959 Talbot-Lago . In the same year, Circle established in a joint venture with the moroccan government Somaca . [1] In the next few years, Chrysler increased its share of Simca 1971 to almost 100%, most of which took over from FIAT. The company is called now officially Chrysler Europe , the brand Simca remained.

Simca 1978 was the Peugeot SA sold. This gave rise to the series of models up to the year 1986 under the brand Talbot continued. From the Simca-Chrysler-roots numerous new models emerged, including the Peugeot 309 , the successor to the Talbot Horizon was designed and in the version of the pre-production already had the name of Arizona. In collaboration with Matra and the experiences of Chrysler in this area ( Chrysler Voyager), was a minivan was developed, which has not been taken over by Peugeot. This gave rise to the Renault Espace .