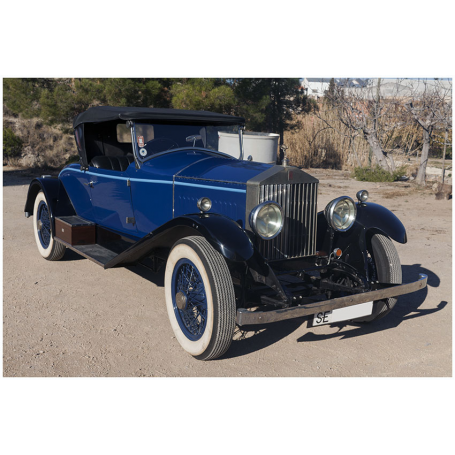 Artsvalua is pleased to offer for your consideration a beautiful piece of the history of the automobile collection, especially in the form of a coupé cabriolet, the famous Rolls-Royce Twenty, 2 doors, 1926. This classic is powered by its original engine with 6 cylinders. This classic has been well maintained and is in impeccable condition .

The car runs perfectly and is very well taken care of.

The Rolls-Royce Twenty built between 1922 and 1929 was the "small-car" Rolls-Royce to the 1920s and was produced alongside the 40/50 Silver Ghost and the successor of the 40/50, the Phantom . It is aimed to appeal to owner-drivers but many were sold to customers with chauffeurs .

We designed a new engine valve air 6-cylinder in-line for the car of 3127 cc with a bore of 76 mm and a stroke of 114 mm unlike the engine, the Silver Ghost, the cylinders were cast in one block and the cylinder head was detachable. Were installed on both the coil as the ignition is by magneto. The first cars had manual gearboxes with 3 speeds with the shift lever in the center of the car, but this changed in 1925 to a unit of four speeds with the traditional derailleur to the right. The power is transmitted to the rear axle through a shaft helix standard with a universal joint at each end.

The chassis substantial had rigid front and rear axles suspended by springs half elliptic, with braking initially only on the rear wheels. The brakes on all four wheels with servo assistance mechanical were introduced in 1925. Is installed the famous radiator Rolls-Royce, with upper-triangular, and the first examples had horizontal planks with a finish of enamel, which is then changed to a nickel finish and finally became vertical.

In 1920, a chassis cost £ 1100 with, usually, a complete automobile with the body of tourism costs about £ 1600. With the job coach until the weight recommended by the factory, the car could reach 97 km / h (60 mph), but many owners had large bodies of sedan installed, with the inevitable detrimental effect on performance.

Only the chassis and mechanical parts were made by Rolls-Royce. The body was made and fitted by a coachbuilder selected by the owner. Some of the bodybuilders most famous who produced bodies for automobiles Rolls Royce are Barker , Park Ward , Thrupp & Maberly , Mulliner and Hooper .

Not using a torque tube to transmit power to the rear axle; this was the case with the chassis 40/50 (Silver Ghost). In the case of the venerable 20 hp, the power is transmitted through the medium of a shaft propeller standard connected by a universal joint at each end.