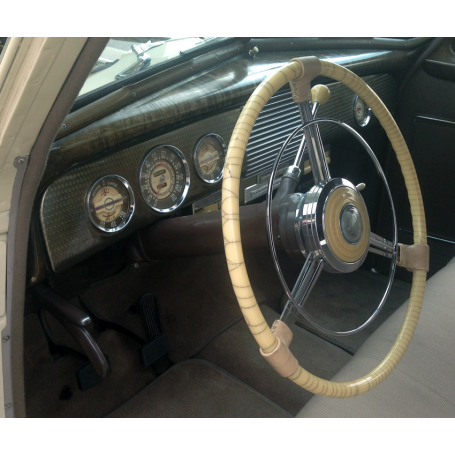 Registered as a historical vehicle in 2007.

The Buick Special was a car produced by the Buick Motor Division of General Motors, Flint, Michigan (USA). It was usually Buick's lowest-priced model, starting as a full-size car in 1936 and returning in 1961 (after a two-year break) as an average size.

The 36th was a very successful year for Buick and also marked as the first time the use of names instead of simple serial numbers. The Special continued is also known as the 40-series, however. The Specials first rode in a 118 in (3.0 m) wheelbase, but for the model the following year it increased to 122 in (3.10 m) all of which Buick grew for that year. The engine was also new, and now it was 248 cubic inches (4.1 L) instead of 233 cubic inches (3.8 L). The Special (and especially all the Buicks) underwent a complete redesign for 1939, with a larger front closed and a wider grille. The wheelbase was also two inches shorter. By 1940, the usual restyle was produced and the wheelbase increased by one centimeter. This was also the year in which a unique four-door convertible Special model ("Sport Phaeton") was offered, although only 552 units were built.

By 1941, the bodywork was redesigned, with the front wings now very closely integrated into the design of automobiles in general. The Estate Wagon migrated from being a Super Special in the lineup. Another novelty was the 40-A of the series (the regular Special now is the 40-B), a version of a shorter three-inch wheelbase that shared his body with the 1941 Chevrolet. Production ended on February 4, 1942. In 1946 only the widest Special range was still available, even before the war with the B-body. The Special '46 is rare, representing less than 2% of Buick's production that year. The Special continued with small changes until the body before the war was finally replaced mid-1949 post-war model were only Specials available as a four-door sedan or a two-door "sedanet", until the new 1949 models they arrived.