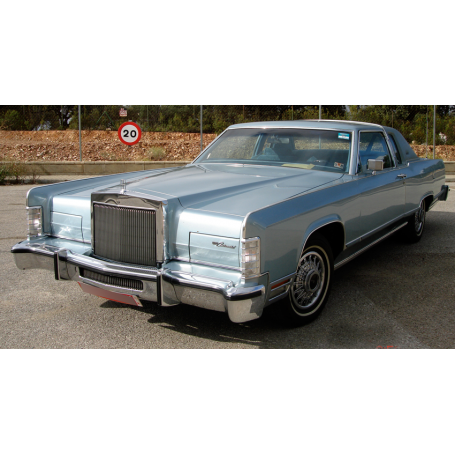 Trivia: imported directly from the USA in 2006.

Almost 6metros long and baggage capacity of more than 500L.

For 1970, the Continental received a redesign ground-up for the first time since 1961. Available again as a two-door hardtop and a hardtop with pillar, four-door, the Continental borrowed a number of style guides both its predecessor and the Continental Mark III. As before, the sides were relatively unadorned with a leaf-shaped fenders, but the door handles on 4-doors gave away the biggest change: the distinctive "suicide doors" were replaced by hinges of conventional first door. Like the Mark III, the Continental now wore hidden headlamps. Monocoque construction was replaced by cheaper body-on-frame construction, on the positive side, the old springs in the rear of the sheet were replaced by coil springs. A release of the parking brake, automatic, two power seats, power brakes front disc (read drum), the closed doors of the beacons of light, and the head restraints are adjustable in series.
1973 Lincoln Continental coupe hardtop
Another major change to the Continental lay under the skin, for the first time, it shares a common platform with the LTD full-size Ford and Mercury Marquis. The 1970 model was the first time that a Lincoln standard shared a chassis with the Ford full-size, something expected as the Ford LTD in an increasingly itself had been marketed as a "Lincoln man poor" in the last 60 years. "In essence, the new Lincoln was to the Ford and Mercury what the General Motors C-Body offerings (especially the Cadillac) were to the lines of cars of average price using the B-shell." In mid-model year 1972 , the long history of Lincoln motor different from their counterparts in corporate came to an end with the V8 460 was available at the Marquis Mercury and the park of the colony. To move luxury Ford and Mercury, the line of full-size Lincoln product gained two nameplates with two packages of popular options. In 1970, the name of the car in the city (inactive since 1959) was restored, and in 1973, a corresponding two-door coupe City was introduced. In addition to the standard continental, the Town Car / Town Coupe offered a cap of vinyl, sedan-style, and more standard equipment. Front disc brakes were standard.

For 1975, the model hard top 2-door was replaced with a coupe pillared; the 4-door received a new roofline to differentiate it even more from Ford and Mercury. The coupe Continental Town received a square window in his opera C-pillar while the town car received an oval one (similar to the Mark IV). Braking performance, a sore spot in the whole extension american cars of the era, was improved, the Continental became one of the first american cars (besides the Corvette) with disc brakes on all 4 wheels. leg room front and rear was 42 inches. In 1977, the grille changed from a rectangular unit to the grill-style Rolls-Royce radiator seen on the Mark series; variations of this style that is used in a car, Continental and City until 1997. The new grille was both higher and narrower than in previous years, but the position of the headlamps remained unchanged. To maintain the level of prices and increase fuel economy, luxury features standard previously gradually became optional on the last one, with the 460 cubic inch (7.5 L) engine becoming an option during the 1977 model year (the dealers product Data Books received insert revised pages 03 1977 that show the 400 after being standard and the optional 460). Model Year 1978 Continentals had the standard 400 and the optional 460, but for model year 1979 the 460 was dropped and only the 400-cubic inch (6,6 L) engine was available. After model year 1976, the 460-4V was no longer available California and all californian Continentals 1977 to 1979 came only with the 400-2V. Skirts rear fenders were reduced in height for the 1978 model year, revealing more of the opening of the wheel. Four-wheel disc brakes were optional. [48] The 1970-1977 models share the same dash design then for 1978 and 1979 Lincoln is replaced by a version more luxurious of the career of Mercury Marquis contemporary.

In 1979, the Continental measured 233,0 in (5920 mm) and a weight between 4,900-5,500 lb (2,200-2,500 kg) depending on the year. After General Motors reduced its full-size product lineup for 1977, the Continental became the largest mass-market automobile produced worldwide at that time, surpassed only by purpose-built limousines such as the Mercedes-Benz 600 and Rolls-Royce Phantom VI. The 460 cid V8 was also the engine of greater displacement in any production car worldwide from 1977 to 1978.
Golden anniversary Town Car (1971)

In 1979, a "collector's series" package option was available to commemorate the last year of the big Lincoln, which added almost all the features of Lincoln and raised the price of the sedan Continental approximately $ 16.500. Between the few and selected options with extra cost were power moonroof, 40-channel CB radio: "Sure-Track" brake system, and leather interior. The price of a series a fully-equipped collector of Continental could exceed the $ 18,000. There were only four colors available: black, medium blue, white and limited edition blue (197 built) and silver light (125 built) with a cap of vinyl color dark blue.