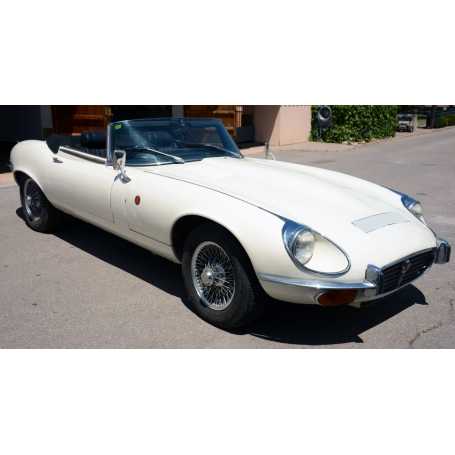 In perfect state of functioning. See photos and videos paint.

The Jaguar E-Type or the Jaguar XK-E for the market of North America is a british sports car, which was manufactured by Jaguar Cars Ltd between 1961 and 1975. Its combination of beauty, high performance and competitive pricing established the brand as an icon of 1960s motoring. In a time when most cars had drum brakes, rear axles live, and a mediocre performance, the E-Type jumped to the scene with 150 kilometers per hour and a sub-0-60 7 seconds of the time, monocoque construction, disc brakes, steering rack-and-pinion suspension-rear, independent front and, and looks like no other. The e-Type was based on the Jaguar D-Type racing cars that won the 24 Hours of Le Mans three consecutive years (1955-1957) and, in such, employs the design of racing bath body joined to a tube frame with the engine bolted directly to the frame.

In march 2008, the Jaguar E-Type ranked first in a The Daily Telegraph online list of "100 most beautiful cars" of the world of all time.

In 2004, International Sports Car magazine placed the E-Type at number one on their list of top sports cars of the 1960s .

The E-Type was initially designed and shown to the public as a rear-wheel-drive gran turismo in the form of a coupe two-seater (FHC or head-fixed-Coupé) and as a two-seater convertible (OTS or open two people). A "2 + 2" version, four-seater coupe, with a wheelbase elongated, was released several years later.

On its release Enzo Ferrari called it "The most beautiful car ever made".

updates model after the E-Type were designated officially as "Series 2" and "Series 3", and over time the earlier cars have come to be known as "Series 1" as with other cars made by hand in a large part of the time, the changes were gradual and ongoing, which has led to confusion about exactly what a car is 1 series. This is more than an academic interest, as the Series 1 E-Type - and in particular the series 1 OTS (convertible) - examples. Have values well above the Series 2 and 3 models.

The cars of the Series 1, which are, by far, the most valuable, basically, are divided into two categories: Those carried out between 1961 and 1964, which had a 3.8-litre engines and transmissions are not synchronized, and made between 1965-1967, which increased the size of the motor and of torque at around 10%, added a transmission fully synchronized, and also provided new reclining seats, an alternator instead of a generator before, an electrical system changed to negative ground, and other modern amenities, while maintaining the same classic Series 1 hairstyle . 4.2-liter Series 1 e-Type also replaced the brake booster of the 3.8-litre unit with a more reliable. "the 4.2 became the most desirable of the famous e-Type due to its increased power and ease-of-use, while maintaining the same external appearance to the earlier cars ".

To be a fact, a british car of the 1960s, there are some subtypes more rare of the Series 1 E-Types, especially at the beginning and at the end of the production of the 1 series. For example, the first 500 Series 1 cars had a flat floor and the closings of the hood outside. At the end of Series 1 production cycle, there were a small number of cars produced that are identical in all respects to other 1 series units ( including carbohydrates triple Your, start button actuated, lever switches, etc), except that the covers of the headlights were removed for better lighting. It is not known exactly how many of these Series 1 cars (sometimes referred to for convenience as "Series 1.25," but for Jaguar, Series 1) were produced, but since they are 1,508 cars series 1 OTS occurred around the world for the 1967, combined with the fact that these examples were made in just the last few months of the Series 1 production, means that these, like the examples of plain background that began the series 1 production cycle, are the volume of the 1-series variant more low, except, of course, for the light weights special.

Around the world, including both the examples of the steering wheel to the left and to the right, a total of 7.828 liters 3.8 Series 1 roadsters were built, with 6.749 of the last Series 4.2 litres 1 roadsters have been manufactured.

While the series 1968 1.5 cars retained the essential design of the models of the Series 1, the regulations of emissions models of the united States to lose the Series 1 carburetors YOUR triples; these were replaced in the Series by 1.5 for less powerful units twin Zenith-Stromberg, dropping from 265 horsepower to 246, and torque from 283 to 263.

Of the cars of the series "1", Jaguar manufactured some variants of limited edition inspired by racing cars:

Safety standards and emissions in the North American market forced the Series 2 and 3 E-Types to lose the "purity of the original, with a bigger grille, wider wheel arches and the bumper, larger are adding that distorts the Series (1) is seen."

The city of New York Museum of Modern Art recognized the importance of the design of the E-Type in 1996 by the addition of a roadster blue for its permanent collection of design, one of only six cars to receive the distinction. The MoMA XKE is a series 1 roadster.

The E-Type Series 3 was introduced in 1971, with a new twelve-cylinder 5.3 L engine Jaguar V12 , upgraded brakes and power steering as standard. Optionally, an automatic gearbox , spoked wheels and air conditioning were available. The new V12 engine of the brand was originally developed for the Le Mans 24 Hours . Was equipped with four carburetors Zenith . The final engine is claimed produced 203 kW (272 HP), the massive torque and a acceleration of 0-60 mph in less than 7 seconds, but this figure was reduced CV in the subsequent production. The body style FHC short wheelbase was discontinued and the V12 was available only as a convertible and coupe 2 + 2.

The performance was very competitive with the contemporary.

The greater the distance between axes of recent use now offers significantly more space in all directions. The Series 3 is easily identifiable by the large front grille-cross grille, flared arches of the wheels, wider tires, four tails, exhaust and a badge on the rear that proclaims it is a V12.

Cars to the U.S. market were equipped with the screening of a large rubber bumper over-riders (in 1973 these were on front, in 1974 both front and rear) in order to comply with the regulations of local impact, 5 mph (8 km / h) , but the european models were considerably smaller. models of the united States also have recurrences of secondary indicators in the front wings. There was also a very limited number of the series of six-cylinder 3 E-Types built. These were presented in the proceedings of the initial sale, but the lack of demand they stopped their production. When leaving the factory the V12 open two seater and V12 2 ± 2 mounted source Dunlop E70VR - 15-inch wheels in 15 × 6K wire or solid wheels.

The factory of Jaguar stated that the placement of a set of tires of radial structure of steel braced-sedan Jaguar XJ12 to a V12 E-Type raised the maximum speed of up to 8 mph. The production car was fitted with tires of radial structure textiles, with splint. This fact was reported by the editor of The Motor magazine in the long-term test of your editing of And of date August 4, 1973, which had a head-fixed V12 for a while.

Two variants of limited production E-Type were made as test beds, the coupe low-drag lightweight E-Type, both of which were running:

Shortly after the introduction of the E-Type, the management of Jaguar wanted to investigate the possibility of building a car more in the spirit of the runner-type D from which are derived the elements of the style and design of the E-Type. The car was built to test the concept designed as a coupé. Unlike the steel production E-types the LDC used lightweight aluminum. Malcolm Sayer retained the original bathtub with panels lighter riveted and glued to it. The sub structure of steel front remained intact, the windshield was given a slope more pronounced, and the hatch back is welded closed. ducts cooling the rear brakes appeared next to the rear windows, and interior finishes are discarded, with only insulation around the tunnel transmission. With the exception of the windshield, all glass cockpit was perspex . We used a tuned version of the 3.8-liter engine from Jaguar with a head design of wide-angle tested in the hallways of D-Type.

The single car test bed was completed in summer of 1962 but was sold a year after racer Jaguar, Dick Protheroe . Since then it has passed through the hands of several collectors on both sides of the Atlantic and now is believed to reside in the private collection of the current viscount Cowdray .

Peter Lindner, the distributor for Jaguar in Germany, had his light weight modified by the factory to include the roof of a low-resistance Sayer and rear panels as part of an effort to win the GT class in LeMans. The car, Lindner was more of a challenge for the Ferrari 250 GTO, but mechanical problems forced him out of the race. Lindner later died in an accident of race that demolished his car, which has been recently restored.

Jaguar waited too long before committing with a program of races of truth and what could have been a world champion in 1962 was not competitive in 1965.