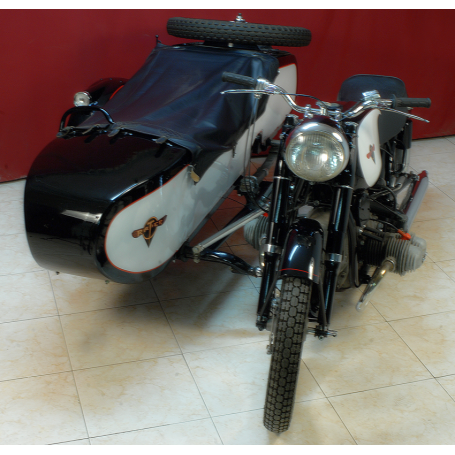 Ratier-Figeac is a manufacturer of aircraft components of Montrouge, France. Built a car between 1926 and 1930, and from 1959 until 1962, manufactured motorcycles, with engines derived from the designs of BMW after the Second World War.

After this race, received the company the name of CEMEC (Centre d'études de Moteurs à Explosion et à Combustion), and proceeded to make parts for bikes of the German company BMW, being then able to produce their own machines.

The origin of the C6 model is at the C8 of Ratier, improved thanks to the inspiration from components of BMW. The one that made up this batch belongs to a group of French manufacturer for the gendarmerie, who were equipped with a sidecar of German type, which would be derived from models of BMW.

This motorcycle has been beautifully restored respecting the original model, and presents all your accessories are impeccable. The sidecar is of origin German type, and it is a machine that precisely this model was chosen by the gendarmerie French for their traffic functions. It is in perfect state of operation and prepared for the management of enrollment or historical.