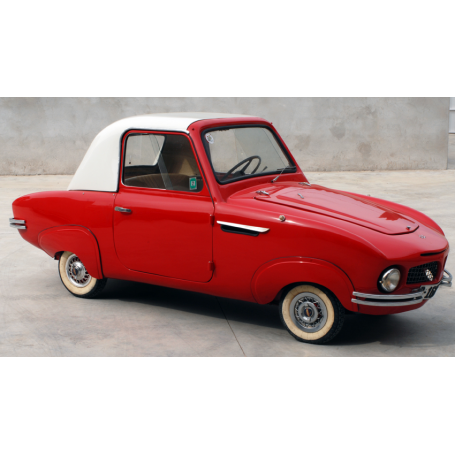 The Biscúter was a microcar manufactured in Spain to the mid-TWENTIETH century.

The lack of raw materials and, in general, the economic difficulties of Europe following the Second World War, became popular cars tiny in many european countries. In Spain the situation was more complicated, since the government of Francisco Franco was rejected by many western governments and communists as a remnant of fascism. In result, Spain suffered a relative isolation from the rest of the industrialized world, it worked to some lower levels of development compared to Western Europe and had to develop substitutes for its own products and technologies import hard to get. The Biscúter, small, simple, and cheap, even in comparison with other microcar, was a product of this economic environment and is well adapted to its time and market.

The car has its origins in France, at the end of the 1940s, where Gabriel Voisin, aircraft designer and owner of the prestigious factory of automobiles Voisin, designed a car, minimum so-called Bi-scooter. The name implied that it was the size of two bikes, a scooter or a motorcycle scooter with four wheels. In France, the idea has not attracted the interest of manufacturers or the public, but it happened the opposite in the Spain of the postwar period, and eventually sold the license to the Spanish firm Autonacional SA of Barcelona.

When it was introduced in the market in 1953, the car had no formal name and was called simply 100 Series, but soon came to be known as "Shoe", for their similar profile to a shoe. A chascarrillo common was "ugly as a Biscúter".

The Shoe really was simplified to the minimum, without doors, windows or reverse gear. The engine Hispano Villiers one-cylinder, 197 cc two-stroke developed 9 HP, you started with a shooter and had the transmission only to the right front wheel. The braking is carried out with a system unusual of three points, which included the transmission and cables to the rear wheels. A feature really advanced was a bodywork completely made of aluminum, although later it was used steel.

After a failed attempt to offer the design original in the French market, Gabriel Voisin received the request unexpected development and marketing for Spain, hungry, then everything that engender motorization.

The design was based on a sophisticated desire to reduce to its minimum expression, the mobility, streamlining and maximizing the benefits of the car, and thus obtain speeds reasonable for consumption never seen before. With this purpose it employed lightweight materials which might not even require painting processes, in addition to continuing the scheme then very advanced front-wheel drive. It was a car extremely sharp and simple. This approach, if well by his austerity did not attract enough attention where it was proposed, it was perfect for the in post-war Spain.

From 1954 The society Autonacional HANDLE manufactured with success in Barcelona, with means similar to those which I had used a larger company, which, along with the success of the design itself, allowed him to build it in series and stand out from the plethora of microcar Spanish, usually produced in a very precarious situation. The iconographic body began to contruír and redefine Constructs Metàl·liques Rañé San Just Desvern, directed by the brothers Marcellin Rañé and Fernando Rañé planchista and father of actor and director Ferran Rañé.

The network of dealers spread rapidly throughout Spain, and the Biscúter knew a period of splendor for several years, after which disappeared altogether. Its range was diversified in the midst of sharp differences of policy versions, van and family, and even a version discutidísima with the body of plastic which was a commercial failure and material.

In the final phase, with the Seat 600 already in the market, the State cut Autonacional the supply of aluminum, which determined that a large part of the Biscúter from then on, they were of steel totally or partially. This steel, contributing to the heroic idiosyncrasies of the Biscúter was obtained to deploy the oil drums of the Marshall Plan.

Beyond 1959-60 dies the car and was born the legend, but it is worth asking what would have happened if, instead of disappearing, the Biscúter and Autonacional had managed to survive industrially.

The Biscúter flourished for about 10 years and became a regular visitor of the Spanish roads. Little by little, we added doors and windows and manufactured forms of bodywork various, including vans, a stylish van with a wooden box (the Biscúter Commercial 200 C) and a sporty almost toy called Pegasín (See Pegaso Z 102 and Pedro Serra).

The government created in 1950, the public company SEAT, which will manufacture since 1953 under license cars of FIAT, in addition to authorize shortly after the establishment of factories of other brands like Renault in 1952 or Citroën in 1957. At the beginning, even the models of Italian design or French more inexpensive, these were considered luxury cars, out of the reach of the Spanish consumer environment. With the passage of time and the enrichment of the country, SEAT was getting higher sales quotas, and ended by expelling from the market the brands of small cars when, in 1957, began the manufacture of the model 600 at a very competitive price.

At the beginning of the 1960s ended the sale and production of Biscúter, after a total production of about 12,000 cars. Almost all Biscúter were finally scrapped.

In the final years of the decade of the 80 was presented in magazines engine Spanish a project for the manufacture of a Biscúter modernized, but the idea did not become reality.

Currently the Biscúter are curiosities in a museum, although, like many of the other defunct brands, has followers among the car enthusiasts. The name is relatively unknown outside of Spain and most of the information on the label is in Spanish. Its extreme rarity ensures that any copy that has survived is a collectors item, although not of a value outrageously high.

Currently there is a project to relaunch the brand in Girona, where the industrial Isaac Valls finalisation of the first prototype that will be presented in 2014.