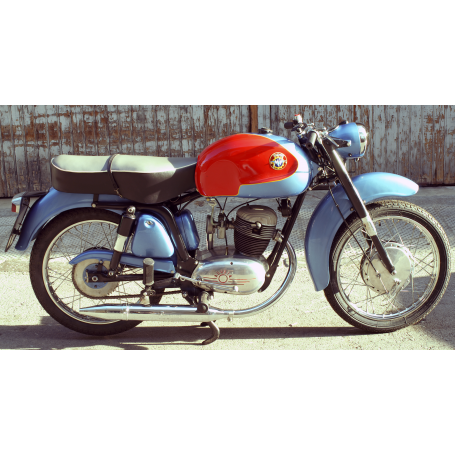 The company began as an offshoot of the aircraft company Agusta , which was founded by Count Giovanni Agusta in 1923. The Count died in 1927, leaving the company in the hands of his wife and sons, Domenico, Vincenzo, Mario and Corrado. Count Vincenzo Agusta together with his brother Domenico created MV Agusta (the initials MV mean Meccanica Verghera) at the end of the World War II as a means of saving the jobs of the company's Agusta and also with the aim of meeting the needs of the market subsequent to the war, which demanded means of transport cheap and efficient. Produced the first prototype which was called "Vespa 98", in 1945. After they discovered that the name Vespa was already registered by the company Piaggio for your scooter Vespa, so the model came to be called exclusively by the number “98”.

Between 1950 and 1970, the company manufactured motorcycles of small cylinder style Cafe Racer (mostly 125 to 150 cc). In the decade of the 60, motorcycle sales, small fell and MV Agusta began to produce fewer bikes but longer in the front. A 250 cc, and later a 350 cc twin cylinder. Subsequently a 600 cc four-cylinder evolved into a 750 cc which is today highly appreciated by collectors.

The Spanish company Avello with headquarters in Natahoyo, near Gijón, manufactured motorcycles under license from MV Agusta, with the names of MV Avello and MV Agusta. In all motocilcetas manufactured in Gijón, you can see an anagram that makes Emeuve, that makes it unmistakable that of the Italian.

From the death of count Domenico Agusta in 1971, the company went into decline and in 1980, it stopped producing motorcycles.

Cagiva acquired the trademark MV Agusta in 1991. In 1997, he built his first motorcycle with this brand. The new bike was a sporty four-cylinder and 750cc engine displacement (series F4), a series that also included some of motorcycle racing as the SPR ("Special Production Racing") decorated all in black, who appeared in the film I, Robot. In 2004 they built the first 1000 cc. 2004 was the end of the production of motorcycles of 750 cc, with a final limited series of three hundred and SR (Special Racing), decorated in the traditional colours of the brand, red and silver.

MV Agusta also built at the beginning of the TWENTY-first century in a limited edition of F4 750 cc and F4 1000 cc, called a "Senna edition" in memory of the brazilian driver a Formula 1 Ayrton Senna, who was a great collector of Ducati motorcycles and MV Agusta. This series is built to help the Instituto Ayrton Senna, a foundation for the support of children and young people in Brazil. Is manufactured three hundred bikes of each of the two displacements.

We also manufactured a number of motorcycles "naked" 750 and 910 cc, this series is named "Brutale". The production is limited, as is generally the policy of the company and, as a mark of prestige in the car as it can be Ferrari. Do not compete directly with the large japanese manufacturers, whose motorcycles typically sell at prices considerably lower than those of a MV Agusta. This company competes with other Italian manufacturers as it can be, Ducati.