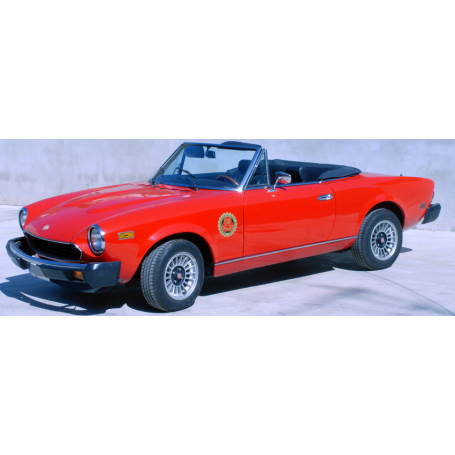 The 124 Sport Spider is a 2 +2 convertible sports car marketed by Fiat from 1966 to 1980 - having debuted at the 11 1966 motor show of Turin . Designed and manufactured by Carrozzeria italiana Pininfarina , Fiat and Pininfarina continued to market the self-monohull healthy as the Spider 2000 1979-82 own Pininfarina took over the marketing of the car from 1983 until the end of its production in 1985 -. as a Pininfarina Spider Azzura .

The body of the car was designed and marketed by Pininfarina . The convertible body was designed by Tom Tjaarda , who used his earlier designs of Chevrolet Corvette "Rondine" and Ferrari 275 GTS. Several years later, in 1981, on the occasion of the 50th anniversary of Pininfarina, this fact is accentuated by the production of a Pininfarina 50a Fiat Spider 2000 (Golden) Anniversary Edition. In 1972, a sports version of the Spider was revealed. This was necessary for a type approval of its version of the rally, which gained some notable successes. The models sold in showrooms were marked as 124 CSA (C-Spider-Abarth). The vehicle had a capacity of 128 horsepower. In three years, Fiat manufactured less than 1,000 models of CSA, which were intended for sale to individual customers. Apart from the Pininfarina 50a Fiat Spider 2000 (golden) Anniversary Edition, this is one of the versions most eagerly sought by collectors.

The car was sold in Europe and in the U.S. from its introduction until the 1975 model year, when it was modified to comply with new u.s. regulations and was produced no european version. Sales in Europe resumed when Pininfarina took over production in 1983 under the name Pininfarina Europa Spider.

The spider Sports, and the Fiat 124 Coupé shared the portions of the numeric to its name with the sedan 124 , along with much of their running gear - and, in the case of the Coupé, a shared platform . The Sports spider uses a platform that is shorter, together with a shorter distance between axles , and in contrast with the spider style, Pininfarina and manufactured, Fiat has designed and manufactured the Coupé in the local.

The four-cylinder engine used in the spider and Coupé was a double overhead cam , aluminum crossflow version of the drive head of the push rod of the sedan. Started in 1966 with a capacity of 1438 cc, which increase progressively up to 1608 cc in 1970 (although this reduced to 1592 cc in 1973), 1756 cc in 1974 and finally, 1.995 cc in 1979. Designed by Dan Vano. Bosch fuel injection replaced the Weber carburetors used previously to half of 1980. In 1981 and 1982, Fiat USA, Inc. partnered with Legend Industries to create approximately 700 models of turbo to the markets of the united States. There was also a model supercharged called Volumex offered toward the end of the production, which was sold only in Europe, where it cost 35% more than a regular Spidereuropa gasoline injection. This family of engines was designed by ex-Ferrari chief engineer Aurelio Lampredi and in one form or another remained in production until 1990 that gives one of the longest production runs in history. The version of double overhead camshaft (DOHC) was the first mass manufactured DOHC to use toothed belts of rubber reinforced, an innovation that would be in use nearly universal in the decades after its introduction. Its family powered race cars such as: FIAT Mirafiori 131, T Special, Lancia Beta Montecarlo, Delta Integrale and many others.

The suspension was conventional by wishbones of unequal length and coil over damper at the front and by coil springs rear axle I live in the back next to a cross-link ( bar Panhard rod ) and two pairs of rods which extend forward radio to react braking and acceleration and to control axle wind-up.

The Coupe and Spider were first sold in the U.S. market in 1968. In 1969, the Spider appeared to have disc brakes on all four wheels, double overhead camshaft, windshield wiper hesitation, mounted lighting-controls on steering column, tires of radial structure and a five-speed manual transmission . A three-speed optional automatic transmission from General Motors was available from 1979 until 1985 for North America as well as Japan. Your roof could go up and lock in less than a minute. When the engine was increased to two litres, the model has been renamed as Spider Fiat 2000.

A special version for the first was the spider Abarth 124 which featured an independent rear transaxle, hardtop, different seats, interior etc and only came in 3 colors.

In 1971 the 124 Spider was prepared for the Championship of the World Rally championship when Abarth became involved with its production and development. Abarth designer Ing. Colucci was responsible for getting the 124 Spider into Group 4 rally trim. During this period the Abarth Spider had relative success with wins at the 1972 Hessen Rally, Acropolis Rally 1973 Rally of Poland, 19a in the rally RAC 1973 and seventh in most of the Renault Alpine in the 1973 Rally Monte carlo. The spider continued to unfold with the first, second and third in the 1974 eighth Portuguese TAP Rally, sixth on the 1974 Lakes 1000, fourth in the Rally Monte carlo 1975, and also with Marku Alen driving the Spider to 3rd. By 1976 the days of 124 rallying were numbered due to the appearance of the Fiat-Abarth 131.