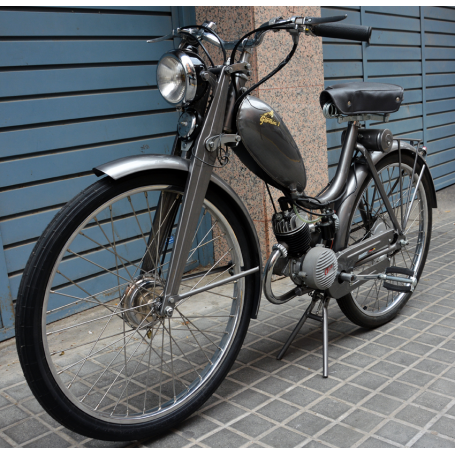 Without documentation, such as it is.

After the hard Spanish civil war, our country experienced a time of great proliferation of small industries to which the motorcycle sector was no stranger. Some pioneers have tried in the years ’40. People like Soriano, Sanglas, Riera (Rieju), Turned (OSSA), Rabasa (Derby) or Permanyer (Montesa), among others, reemprendieron old projects or simply created new companies to put the country on two wheels. But it was during the years ’50, when appeared a lot of new brands – we came to count more than a hundred – that are worth any thing to create motorcycles. Engines imported mounted in the chassis of a bike, the use of stationary engines, agreements with foreign manufacturers... but almost always with a very basic technology, poor industrialization and high-quality materials, very poor quality, which made the industry of this decade be as flourishing as ephemeral.

The brand Clúa, located in Barcelona, was perhaps the most prolific of this type of industry in relation to models, maintaining an active manufacturing between 1949 and 1962. Its origin is found in the company Buildings Mechanical Clúa Sl, established in Barcelona in 1924 for the repair of Diesel and gasoline engines that, like many other firms in the sector, at the end of the war he devoted himself to the business of motorcycles. After you use the names of Benjamin,

CMC and MC, in 1953 definitively adopted the name of Clúa. Noted for his great ability to create different models and different displacements, although some of them had a very short life, as the motorcycle that we present in this report. It is a curious sport variant of 175cc, 1957, which have very few references and who stands out for his dual exhaust.

This unit forms part of the exhibition dedicated to the history of the bike Catalan, which can be visited in the Museu de la Moto de Barcelona until the month of may 2012.