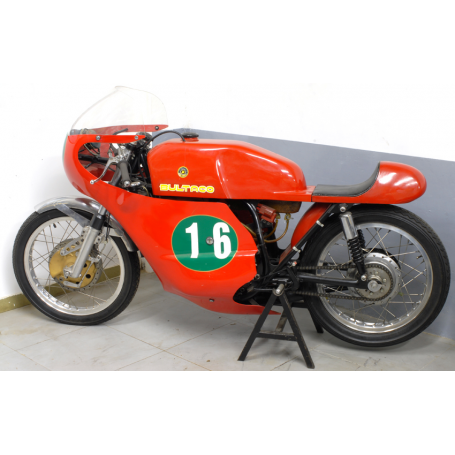 The origin of the motorcycle company Bultaco dates back to may 1958. Francisco "Paco" Bultó was a director of the company motorcycles Montesa was founded in 1944. After several years of continued growth and the success of the road races, in 1957 he moved to Montesa larger facilities. The move was protracted, disrupting production and was followed by a slowdown of the Spanish economy. This crisis put an end to the disagreements between the head Bultó and the other senior director Pere Permanyer. Such as a measure of economy, Permanyer (the majority shareholder) believes that the company should withdraw from racing. Bultó, the driving force behind the racing program and responsible for much of the technical expertise of the company is opposed violently. Not to reach a compromise, Bultó decided to leave Montesa to concentrate on his other business interests. Maybe it was expected, the majority of the racing Montesa department left shortly afterwards as well. Although they made road and road bikes from racing, the company area of dominance was off-road, motocross, enduro, and observed competency testing.

Perhaps the most famous Bultaco Sherpa T is, a dirt bike, which revolutionized the sport in the 1960s. At that time trials was almost exclusively a sport british with large and heavy machines four times. Irish trials ace Sammy Miller worked with señor Bultó to produce a lightweight two-stroke machine which, overnight, made the bulk of the four-stroke obsolete. Miller won the gruelling Scottish Six Days Trial in 1965, and then repeated the feat with wins in 1967 and 1968. He also claimed the European Championship Trials in 1968 and 1970. This coincided with and, perhaps, stimulated the growth of the popularity of trials in Europe and later the US, which provided a lucrative market for Bultaco in the years to come. Bultaco dominated the World Championship Trials in the 1970s, winning the title on eight occasions, and winning the Scottish Six Days Trial four times.

First model of Bultaco in the USA, the Pursang, was an excellent handling and powerful 250 cc competition model that could readily compete in virtually any type of speed-based competition off-road. In the past models this was expanded to other models 125cc, 360cc and 370cc, as the T Sherpa (trials), the Astro (flat tracker) and the Matador (trail bike), to condition of approaches, more oriented to specific types of races. (An interesting note is that some believe that the "T" in Sherpa T is a credit oblique and educated sherpa Tensing Norgay, who was indefatigueable Sir Edmund Hillary climbing partner during his ascent of Everest's famous).