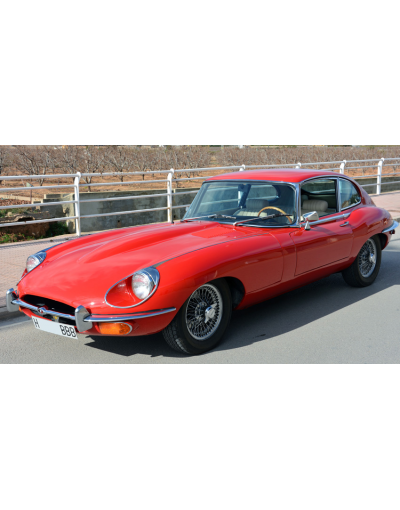 Books of maintenance. Only two owners. Documentation of the time.

The Jaguar E-Type (known in the united States as the Jaguar XK-E) is a sports car manufacturer's English Jaguar Cars, manufactured between the years 1961 and 1975. Caused a sensation display at the Geneva motor show in march 1961, the dazzling reception evoked the release made in England, in 1948, the model XK120. A few weeks after, they made act of presence at the Auto show in New York. The reaction was equally dramatic. The E-Type was a real feeling world. The british magazines specialized in the car, they had organized several tests with prototypes of the pre-release. The E-Type came to market with the difficult task of replacing the successful XK120, XK140 and XK150, with two body types: roadster and coupe. His lines were a creation of british designer Malcolm Sayer, who used his vast knowledge in aerodynamics, the product of their successful experiences in aerospace, to create a silhouette clean and aerodynamically efficient.

The motor unit of the E-Type was the same block as used in the XK, a powerful six-cylinder in-line 3.8-litre designed during the Second World War, which had double overhead camshaft, cast iron block and aluminum cylinder head, fed by three carburetors, produced 265 HP at 5,500 rpm,1 that allowed him to reach 150 mph (240 km/h) with acceleration from 0 to 62 mph (0 to 100 km/h) in 6,9 seconds. Technical innovations very interesting, which include disc brakes on all four wheels, double springs at the rear axle and the triple racket wipers.

In 1996, the Museum of Modern Art in New York acquired an E-Type Series I as part of its permanent collection in recognition of its style and performance outstanding.