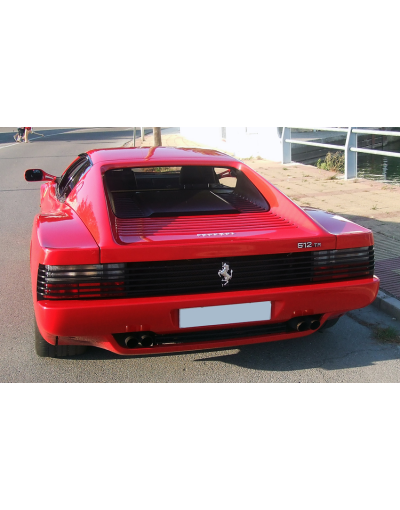 In perfect state of functioning. Prepared by Cristian Governatore Engineer Michael Shumacher, with 485cv and torque of 519 kn.

The Ferrari Testarossa is a sports car produced by the Italian manufacturer Ferrari between the years 1984 and 1992.

The Testarossa has a boxer engine mid-rear of 12 cylinders. Replaced in the range to the Ferrari BB 512, also of boxer engine central. Instead of carburetors (as the BB 512), has the injection-BOSCH K-Jetronic for each line, 6-cylinder, with gasoline pressure 6 kg/cm2. At that time I wanted to be the version of the F1 for the road, considering that his speed of almost 300 km/h is exceptional for its decade. Not required aleron-spoiler, since the front glass (windshield) it was so late and inclined, that it was spoiler central. The bottom of the car was a sheet metal plane, to produce a ground effect that works with the car's stability at speeds above 200 km/h. Perhaps its low altitude with respect to the ground has been removed ease of maneuvering in driveways, roads, potholes, petrol stations, etc, and the customers have turned to new models, which are short and high.

The Ferrari Testarossa, not to be confused with the Ferrari TR (Testa Rossa), in the late 1950s and early 1960s. These were cars gran turismo sport, which developed in the World Championship of Sports cars, including the 24 Hours of Le Mans.

The name Testarossa, which in Italian means "red head", comes from the red paint on the flat head of the 12-cylinder engine that has its engine. Of course, the double meaning of this term in relation to women redheads was intentional; in fact, Ferrari and Pininfarina used regularly descriptive terms related to a woman's body when describing the style of their cars.

The engine was technically a V at 180°, with plane crank and opposing cylinders. The power was 390 HP (291 kW), the car won many admirers and made quite a few comparison tests, it also appeared on the cover of Road & Track magazine nine times in just five years. In total were produced 7177 Testarossas, so that makes it one of the current models of Ferrari are the most common, despite its high price and exotic design. The price of the Testarossa in the us. UU. was $ 181,000 in 1989, including $ 2,700 tax by its high fuel consumption. The initial price of sale in the Uk was £ 62.666.

The roots of this car go back to the Ferrari 512 BBi, 1981. Both share the same basic platform, though the Testarossa is installed shock absorbers FK of Ogiva double in the rear. The engine was too similar, despite the fact that it has 4 valves per cylinder. An important difference is the mechanics of the radiator: the BB 512 has only a single radiator in the front, while the Testarossa has a pair of extractors smaller on each side in front of the rear wheels. It required the distinctive lateral mounted and the air intakes, as well as the wide body. It has also contributed in the reduction of the temperature of the cabin since the radiator hoses are not run under it.

Even though the Testarossa had success on the road, did not appear in circuits, unlike the 512 BBi, which had done so with minor success.

This car became a synonym of the 80's and currently plays a part of the culture of retro-80's. This popularity makes this model one of the flagships of Ferrari, despite its demise in the mid-90's. Its popularity makes that the day of today is a model much revered by fans of the Italian brand, making it comparable with models of Lamborghini Diablo and Porsche 911, models, badges of the houses Lamborghini and Porsche respectively.