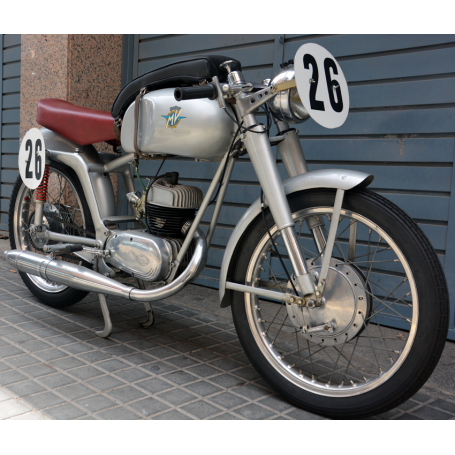 MV Agusta is a builder of motorcycles founded in 1945 in Cascina Costa, near Milan in Italy.

The company began as an offshoot of the aircraft company Agusta, which was founded by Count Giovanni Agusta in 1923. The Count died in 1927, leaving the company in the hands of his wife and sons, Domenico, Vincenzo, Mario and Corrado. Count Vincenzo Agusta together with his brother Domenico created MV Agusta (the initials MV mean Meccanica Verghera) at the end of World War II as a means of saving the jobs of the company's Agusta and also with the aim of meeting the needs of the market subsequent to the war, which demanded means of transport cheap and efficient. Produced the first prototype which was called "Vespa 98", in 1945. After they discovered that the name Vespa was already registered by the company Piaggio for your scooter Vespa, so the model came to be called exclusively by the number “98”.

Between 1950 and 1970, the company manufactured motorcycles of small cylinder style Cafe Racer (mostly 125 to 150 cc). In the decade of the 60, motorcycle sales, small fell and MV Agusta began to produce fewer bikes but longer in the front. A 250 cc, and later a 350 cc twin cylinder. Subsequently a 600 cc four-cylinder evolved into a 750 cc which is today highly appreciated by collectors.

The Spanish company Avello with headquarters in Natahoyo, near Gijón, manufactured motorcycles under license from MV Agusta, with the names of MV Avello and MV Agusta. In all motocilcetas manufactured in Gijón, you can see an anagram that makes Emeuve, that makes it unmistakable that of the Italian.

From the death of count Domenico Agusta in 1971, the company went into decline and in 1980, it stopped producing motorcycles.

Cagiva acquired the trademark MV Agusta in 1991. In 1997, he built his first motorcycle with this brand. The new bike was a sporty four-cylinder and 750cc engine displacement (series F4), a series that also included some of motorcycle racing as the SPR ("Special Production Racing") decorated all in black, who appeared in the film I, Robot. In 2004 they built the first 1000 cc. 2004 was the end of the production of motorcycles of 750 cc, with a final limited series of three hundred and SR (Special Racing), decorated in the traditional colours of the brand, red and silver.

MV Agusta also built at the beginning of the TWENTY-first century in a limited edition of F4 750 cc and F4 1000 cc, called a "Senna edition" in memory of the brazilian driver a Formula 1 Ayrton Senna, who was a great collector of Ducati motorcycles and MV Agusta. This series is built to help the Instituto Ayrton Senna, a foundation for the support of children and young people in Brazil. Is manufactured three hundred bikes of each of the two displacements.

We also manufactured a number of motorcycles "naked" 750 and 910 cc, this series is named "Brutale". The production is limited, as is generally the policy of the company and, as a mark of prestige in the car as it can be Ferrari. Do not compete directly with the large japanese manufacturers, whose motorcycles typically sell at prices considerably lower than those of a MV Agusta. This company competes with other Italian manufacturers as it can be, Ducati.

In 2005 MV Agusta produced the "Tamburini 1000", named so by its designer, Massimo Tamburini, who previously worked for Moto Guzzi, and most recently Ducati. Cycle World australian magazine specialized named it the best sports bike in the world.[citation needed] Tamburini designed the Ducati 916 (the predecessor of the series 748 and 996) that marked the return of Ducati to the success of sales in the last decade. The MV Agusta F4 refined the innovative design of the Ducati 916. In recent publications, the MV Agusta has been highly praised as one of the motorcycle best ride ever made [citation needed] and the F4 312R 2008 is known to be the motorcycle of series fastest in the world, the power of this bike is 183 HP.

In 1999, the group Cagiva was restructured for strategic reasons and MV Agusta became the main brand of the group which also formed part Cagiva and Husqvarna.

Acquisition and sale by Proton

In 2004, the company was greatly in debt, and in December, was sold for 70 million euros to the malaysian automobile manufacturer Proton. However, in December 2005 Proton sold the company to the financial GEVI Spa, for the token amount of £ 1 in exchange for assuming its debts.

In 2006, GEVI SpA, with 65% of the capital, has refinanced the company, and therefore allows for its continuity, and, at the same time return the property of the company to Italy.

In July 2007, MV Agusta Motor S. p. A, sold the brand Husqvarna to BMW for an undisclosed amount.1 , According to the president of MV Agusta, Claudio Castiglioni, the sale was a strategic step to concentrate all the resources of the company and increase the presence of MV Agusta and Cagiva in the international markets having more financial resources to develop new models.1

After years of stagnation. The icon of the exhibition "Art of the Motorcycle" at the Guggenheim museum, the model F4, needed to be renewed, but the financial situation of the company is not allowed. On July 11, 2008, Harley-Davidson announced they had signed an agreement to acquire the group MV Agusta for 70 million euros. The purchase raised expectations that the company took a new direction. The purchase was concluded on August 8, 2008.

The October 15, 2009, Harley-Davidson announced that it would sell its shares of MV Agusta.

The August 6, 2010, Harley-Davidson sells MV Agusta to its former owner Claudio Castiglioni. It also announces the manufacturing of a new model's howling triple 675cc under the name of MV Agusta F3.

Vincenzo and Domenico Agusta were passionate about mechanics and motorcycle races. They were determined to have the best team in the world in the Motogp World Championship and not repaired in costs to get it. In 1948, the company built a motorcycle monocilíndrica of 125 cc and two-stroke and enrolled Franco Bertoni in the Italian Grand Prix of that year. Bertoni won the race held in Monza and instantly the new manufacturer of motorcycles rose to fame.

In the season of 1949, the category of 125 cc, won prestige. More and more manufacturers of motorcycles participated in the opening races of the World Championship held in Switzerland, the Netherlands and Italy. Motorcycles Mondial 125 cc DOHC dominated the season. The riders of MV Agusta finished ninth and décomo at the end of the season. In 1950, Arturo Magni and Piero Remor joined the company after having worked in Gilera. Magni was the chief mechanic and Remor was chief designer.7 The seasons of 1950 and 1951 were years of development while the brand was taking the four-stroke engine of 125 cc DOHC. The efforts they only managed a fifth place in the Grand Prix of the Netherlands, 1950. The season of 1951 was only a little better.

The season of 1952 saw the introduction in the race bike in 125 of telescopic forks, brakes and alloy fuel tank more stylized. The power was 15 HP to 10.800 rpm. Britain's Cecil Sandford piloted the new MV Agusta 125 in the TT Isle of Man and won, in this season won two Major Awards and did two other third places, which helped him to win the World Championship of 125, which was the first for the company. In 1953, the engineers adopted the fork of the type Earl to solve the problems of manageability. In the season of 1953, he introduced the 350 four. This season MV Agusta had bikes in the categories of 500 cc, 350 cc and 125 cc.

In the mid-50's of the TWENTIETH century introduced the category of 175 cc. MV Agusta produced the 175 CSS for on-road use, and developed a 175 cc's of competition for private pilots. The 175 cc was very popular in Great Britain. Riders such as Michael O'rourke, Derek Minter, and Bob Keeler competed in races of 175 and 125 for the whole of Europe with great success. The marketing slogan “to compete on Sunday, selling on Monday” was used. In the race bikes, the first MV Agusta had the side of the housing removable for easy access to the gearbox.

The competitive nature of count Agusta, did that I used to sign the best riders of the time to bring their motorcycles. among them could be emphasized; Carlo Ubbiali, John Surtees, Mike Hailwood, Giacomo Agostini, Phil Read, and others. At the same time also had the best engineers, between those who emphasized Arturo Magni. The race bikes of three and four cylinders were renowned for their good behavior and performance. The bikes used to go painted red and silver, with a hallmark of quality in the decades of the 60's and 70's of the TWENTIETH century, winning consecutively 17 World Championship 500 cc, and a total of 63 World Championships in all categories. After the death of count Domenico Agusta in 1971, the brand has lost its thrust. MV Agusta won their last Grand Prix in 1976, abandoning the race in 1980. This abandonment also contributed the entry on the scene of the japanese bikes (Honda, Yamaha, Suzuki and Kawasaki), two times in a short space of time, managed to bridge to the four-stroke MV Agusta.

Between 1948 and 1976, MV Agusta won more than 3,000 races. After the company left the competition in 1980, Arturo Magni produced his own chassis, which coupled engines MV Agusta.

Back to the competition

Although there was no official team, and private teams have competed with the F4 750. In 2003 , the competition, Big Show Racing , Chicago Illinois; saw the participation of a F4 750 in the Formula USA , in the race the Daytona International Speedway 200 Mile Team Challenge. The team finished second with drivers Larry Denning and Aaron Risinger.

In may 2007, the company announced its return to racing in the 2008 season of the World Championship of Superbikes. Carl Fogarty was going to be the pilot that took the motorcycle. However, Fogarty left the project for some of the main sponsors abandoned him.

MV Agusta participated in the Italian Championship of the world Superbike championship in the 2008 season. Luca Scassa won this championship with an MV Agusta factory.

The series F4 CC, named in honor of Claudio Castiglioni (The managing director deMV Agusta) is a motorcycle of series more expensive. With a recommended price of about 85,000 €.