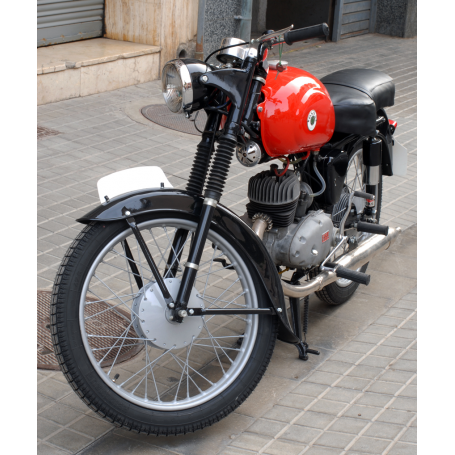 (Budget depending on autonomous community)

At the end of 56 and taking advantage of the Trophy José Mª Walloon is presented which would be the replacement for the 125, the model "B".

Except the engine, which although it has internal changes for increased performance, are part of the same base, virtually the rest of the bike is new. Frame monoviga fully renovated, suspensions front and rear new and more resistant, comfortable seat two-seater, storage capacity, and different exhaust. In terms of aesthetics, the bike is fully painted in black with marbled steaks, using red as the second color in the tank.

In the year 58 is updated, the version taking the second series with some improvements, the most important being the fuel cap for threaded and plastic, headlight with speedometer built in, increase in the rear light of the brand "Gemo" and disappearance of the bellows of the fork.

Finally note that the impeccable restoration of the model protagonist of our page, is in charge of Artsvalua. sl. 125 C2

This model was on the market from 1961 to 63 and with it the end of the models of asphalt in this displacement. In reality it is no more than an adaptation of the model named with "C" that changes the color of tank and tool box in red and incorporates a compartment for the air filter. The seat was redesigned to make it more anatomical and the rear light turns out to be the Gemo grande.