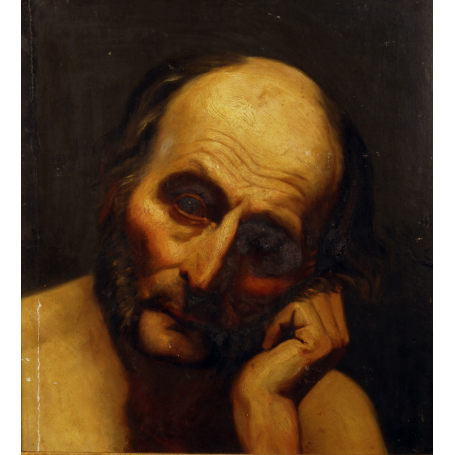 In this canvas shows the figure of a man in an attitude of deep introspection, with the head cocked and resting on the hand and staring, fixed on the distance. The character is shown half-length in the cutting plane, cut on a dark background and neutral that highlights his physicality. The man appears naked, without clothes that relate to any time, in a clear attempt by the author to take temporarily the image, to draw a universal archetype. The figure occupies most of the space, leaving even him in the left side. In this way, the author highlights their physical presence, looking for a naturalism almost an illusionist. Formally, this work is framed within the current recovery of the values of the baroque. During the NINETEENTH century, painters turned their eyes to the past and rediscovered, languages and aesthetic beyond the classicism of renaissance. Especially in Spain, Italy and the Netherlands, the baroque was key to the development of the new modern languages. In the case of this painting can be seen with clarity in the footsteps of Caravaggio and Ribera, heads of the baroque naturalist Italian. Of them taken by the author, the simplification of composition and the contained chromatic range around the warm colors, browns, ochres and earthy. Also the exhaustive physical description, absolutely real and no prospect of an idealization, it is an inheritance of the masters of the SEVENTEENTH century, who sought a new way of shaping the world through human models totally vulgar.