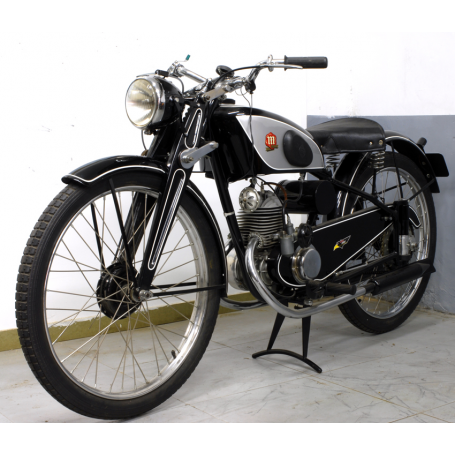 Number 60 of manufacture of this model.

Only 95 units are produced.

With warranty 5 years on parts restored.

There is one on exhibition in the Museum of Motorbike of Barcelona.

Between the 12 of February of 1945, date in which finished the first prototype, and on the 17th of June, in the that this was officially presented at the Fair of Samples of Barcelona, Permanyer and Bultó had to invent a name for the new brand. The most valued were Pigador and Gazelle, names that do not just convince Permanyer. This, once you have made the anagram and all, reading a book of chivalry he discovered the name of the Order of Montesa and it occurred to him suddenly: the new bike would be the riding of the horsemen of the TWENTIETH century. It has also been said that the finding was of Bultó, but at least one n ideà the logo, giving way to gothic to the "M" and adding around a crown, as if it were sealing-wax stamped by a seal, which is inspired by the logo of the old Chrysler.

Many years later, towards the middle of the decade of 1960, created a slogan that has been forever associated with the brand: Viva Montesa. The author was her Kim Kimball, importer Montesa in the USA, which was inspired by the historic "Viva Zapata" to create a marketing slogan. At the time of its launch, the slogan was one of the advertising campaigns more impactful in the world of motorsport.

Montesa To-45 98cc, known also as a Coffee maker for the shape of your cylinder. It was the first model manufactured by Montesa (1945).

The crisis of the 50's
As the successor of its first model, Bultó designed a new road bike of 125cc that was proven in many races of speed and endurance. The bike had a gearbox six-speed chassis and semi-monocoque. This model came to take part in 1951 in the Six Days International Enduro, conducted by the same Bultó and Guillermo Cavestany, and during the 1950s involved a lot in speed races in the 125cc class. In 1956 was the rise of the Montesa 125cc championship, finishing in places second, third, and fourth of his category in the race for the Tourist Trophy of the Isle of Man.

The Montesa of greatest commercial success in the 50s was the Brio 80, of which there are more than 12,000 copies. The models Brio 80 and Brio 90 incorporating many technological advances, such as the carburetor behind the cylinder, and a handbrake. The success of the Brio and the other models made that Montesa opened a new production center of more large and modern. However, a fall in the Spanish economy had forced Permanyer to cut out the sports activities of the company . Permanyer wanted to retire from the drag racing, but Bultó insisted that they had to continue. Finally, in may 1958, Bultó left the company taking is an essential part of the technical staff and founded Bultaco. Permanyer lost not only a designer's brilliant but also its participation in the 30% of the company. Fortunately for both, the Spanish economy began to improve.