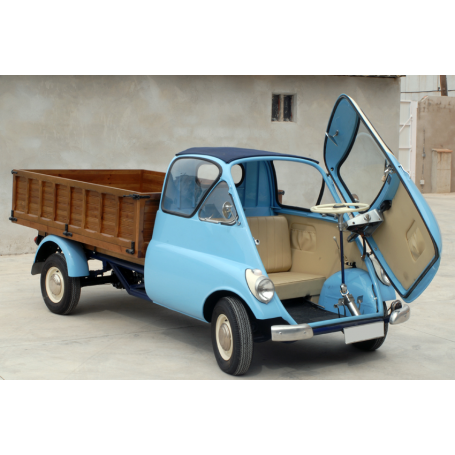 The decade of the fifties 50's, it was somehow the equivalent of the “Renaissance”, to the designers of micro cars, starting with the Iso Isetta Italian, which was simultaneously bizarre and miniature.

The origin of this car gave thanks to the Italian company Iso SpA. At the beginning of the decade of 1950, the company was producing refrigerators and scooters (scooters) and tricimotos load; a day the lord Renzo Rivolta, owner of Iso, decided that we'd like to build a small car for the masses and by 1952 the engineers Ermenegildo Preti and Pierluigi Raggi, designed the small vehicle, which is propulsaba with the same engine of the scooter and called it the Isetta (a diminutive in Italian, which means little Iso). It is said that the design was born to put two scooters side by side to the other, add a refrigerator, and give it a teardrop shape.

The Isetta caused a sensation immediately when it was introduced to the press in Turin in 1953. It was something never seen, and its design caused as much amazement as tenderness. Is offered two models: the Tourism, that it was the little “eggy” very narrow back (50 cm), and the Autocarro, a rear axle full-width. The Car car, are offered in different bodies such as panel van, pickup truck, plato's stakes, while that of the Isetta came out taxis and even a fire truck.

The Car car Iso, it was extremely popular in Italy, and many manufacturers produced different varieties of this vehicle. The Car car Iso, it was a little larger; designed with four wheels, rear axle with differential and conventional leaf springs and a tube frame of a large size. Was able to load up to 600 kg (1323 pounds). It was also known as the Auto car Isetta.

As a ‘prototype’ released on the highway, the Iso Isetta original had a body-type mono-volume, micro-coupe or simply egg, three wheels and one front door, two-seater, with a deposit of 13 liters and a size of 2,250 metres long x 1.340 m wide x 1.320 meters high and a weight of 330 kg. Iso promptly added another wheel for increased stability and gave licenses of its distinctive design of two parking spaces to other companies around the world to be made, including BMW. BMW, eager to enter a market as attractive as the north american, did not hesitate in making some modifications to your Isetta to adapt it to the regulations of movement in force in that country. Therefore, the model US Export was attended with the following adaptations:

The engine was a two cylinder parallel two-strokes and a single chamber explosion, the main piston was connected with its connecting rod to the crankshaft and the secondary with a semi-connecting rod connected to the crank main, was cooled by an air turbine of 236 cc, with a power that generated almost 10 Hp. Transmitting the traction to the rear wheels with a double chain (this was the reason for the lower step of the rear wheels). The changes were 4 forward gears and 1 reverse.

The frame was of tubes, triangular steel soldiers, the independent front suspension and leaf springs in the rear suspension. It came with hydraulic brakes on all four wheels (drums of 180 mm) and tires 4,50 x 10". It reached a speed of 80 Km/hour, with a consumption of 4 litres per 100 Km.