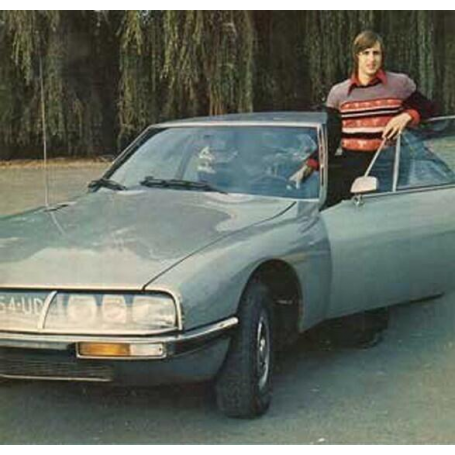 This is the car that belonged to Johan Cruyff in the 70s, Bring documentation of traffic that justifies this information.

The engine is locked and stopped from 15 years ago. Sold as is, we can make personalised estimate of the restoration if the successful tenderer what you want.

The Citroën SM is a sports car manufactured by the French company Citroën between 1970 and 1975. The SM took third place in the contest Car of the Year in Europe in 1971, behind the Citroën GS.

In 1968 an agreement was reached between Citroën and Maserati in for a technical collaboration, which used a V8 engine source Maserati to propel a vehicle Automobile, during its development, the so-called "project S", and which eventually evolved into the coupe SM.

After two years of development, the SM was introduced at the Geneva motor show in march 1970, but after this first contact, it was in October of the same year, at the Paris motor show where it caused a true sensation.

The SM had a V6 engine 90°, delivering 170 HP, and was able to propel it up to 220 km/h. The version equipped with electronic fuel injection increased these values, and the SM also had elements of comfort usual in vehicles of high-end three decades later, such as disc brakes, hydropneumatic suspension, steering self-centering, electric windows, leather upholstery or headlights directional.

Engine bay of a SM where you can see perfectly the spheres of the suspension.

The end of the SM began with the oil crisis of 1973, which decreased the ordering of cars "thirsty" for fuel, so that Citroën decided to stop its production in 1975, as well as its collaboration with Maserati. However, not all was perfect in the car. The engine was in origin a V8 Maserati, which he removed two cylinders to become a V6, without changing the angle of the bench, which resulted in problems of balanced. Also the chain of distribution was located between the cylinders, forcing almost to dismantle the engine to replace it. The heating problems are compounded in the version with electronic injection, with cases of fire.