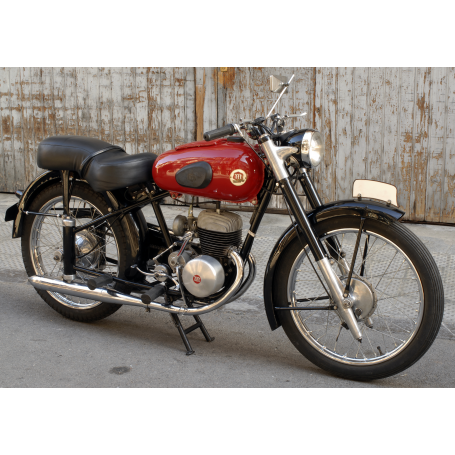 Ran the year 1944 when Pedro Permanyer and Francisco Bultó they built the first prototype motorcycle MONTESA from the French models of Motobecane. It was a bike with engine 93cc that the next year would participate in the proof of regularity of the R. M. C. C, but not finished. The new motorcycle was presented in public to the Fair of Samples of Barcelona and sold 22 units in the first year and was on the market. At that time the demand already exceeded the production capabilities so that Permayer and Bultó formed a society that would be called MONTESA.

As the successor to the previous model, the Mr Bultó designed a new engine of 125cc, which is tested many times to verify its reliability and that, after participating in several sporting events, formed the basis to compete in 1951, at the ISDT in Italy, where the pilots F. X. Bultó and G. Cavestany get the bronze medal. At the beginning of the decade of the 50, Montesa incorporates the class 125cc with a new model, the Montesa Brio 90. These bikes come with large technical changes in the engine, the cylinder head, carburetor, gearbox etc, that will make you very competitive in the races, getting a great experience that was recognized by the european press and by the good results obtained. The bike most popular of calle de Montesa in the years '50 it is the Brio 80, producing more than 12,000 units. The success of the Brio and the other models preceding, causes the opening of a new factory and more big in Espulgues de Llobregat (Barcelona) .

Shortly after, the decision of Permanyer to cut expenses in the department of competition, which in those times was not producing money, with which Bultó was not in agreement, it would cause a rift between the two that resulted in the launch of Francisco Bultó. In may 1958, the designer and main partner leaves, taking with him several persons of vital importance to the factory Montesa. Mr. Permanyer had lost not only a brilliant designer Bultó, but also its part of the 30% of the company. After the economic crisis that had forced them to undertake the cuts in the budget before mentioned Permanyer began to promote the scooter, entering as a new technical director, Leopold Mila , and the son of Permanyer, Javier as responsible for the competition, signed by pilot Peter Pi. We designed a engine of 175cc, engine this, that before 1960, will form the basis of the assays of the company and of the machines future of motocross and all-terrain. Meanwhile Peter Pi, this busy winning races of motocross, in addition to working in a new version, 250cc, being this engine is the cornerstone of the success of the future of the company, being edited later in the Montesa King Scoripon. In the decade following, Montesa tíene an unprecedented growth around the world, though Bultaco had subtracted an important part of the clientele of Montesa, the latter has once again decided to return to participate in the competitions, especially in the regularity where the Montesa Brio 110 is proving to be very competitive. Montesa, that was not even really a model defined for these purposes, participated in the races first with your model D-51, with a small two-stroke engine of 98cc, telescopic fork with hydraulic shock absorbers, brake light alloy, tires, street, etc, until 1953 time it is actually would be that we can consider as the first Mountain sports, the Goat, developed on the basis of the Brio 90.

The change was very important, as they rode a new engine of 125cc, a new carburetor, changing gears with better relationships, new rack, and many more upgrades, still a great motorcycle in those times. Two years after the Montesa Brio 90 was the pioneer in many aspects, up being exported in the whole of Europe, and the great majority of south american countries. The Brio 90 Goat evolves to the models 91 and 110, keeping this last the ancient engine, although improved, by changing the frame of spring type with clevis wishbone and the rear suspension-that was complemented with a bottle hydraulic auxiliary. The gearbox is of four speeds, the exhaust are gathered together for the same side and protect against burns, covers strings is cut, the front fender is raised, the air filter is special, the tires are mounted on studs, and installs a few bags above the tank.

In the year 1959, were made with this frame 117 successes in international racing, in addition to the Cup of Resistance of Europe, and of the state Championships. At the beginning of the year 1962, Montesa prepares the launch of a new model, the Montesa Impala, submitting it prior to its commercialization in the Operation, Impala, test in traversing the whole of Africa, traveling a total of 12,000 miles, in addition to participating in tests of Cross, rally, and endurance, proving its robust reliability. In the Impala, everything is virtually new, with an engine of 175cc to develop in the model Impala Sport 18CV at 7000 rpm, which easily could be prepared for use in competition, riding basically the version enduro, a high exhaust, a skid plate, handlebar height, and a rear tire of tacos. The impala was a motorcycle very versatile, won the Delta award in Gold in 1962 for the best design.