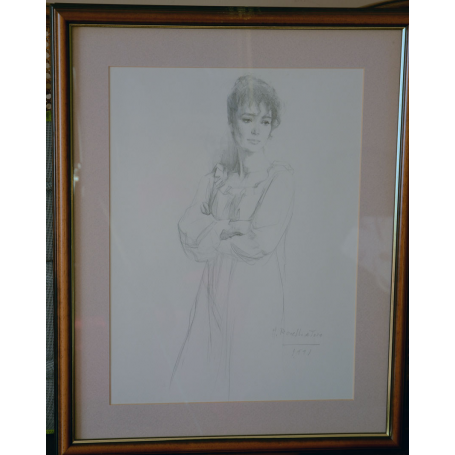 Signed and dated in the lower center.

A portrait of the painter from malaga. Gregorio Torres

María Jesús Pérez Ortiz Our beloved and admired fellow countryman Félix Revello came into the world in the spring of 1926. Ana Maria Toro Flores, a woman of extraordinary personality, and sympathy, gave birth to her fifth child, assisted by the doctor Narbonne in the Hospital Noble of Malaga. There, embraced by the sea breeze, it opened his eyes to the world, for the first time, this exquisite painter and portraitist exceptional. Maybe your retina stay wound with the pristine light and esencializadora of that magical City of Paradise.

In the framework of the monumental calle Císter, next to the Abbey of Santa Ana de Recoletas Bernardas and the house and workshop of Pedro de Mena, passed the first years of his life, next to his parents José María Revello and Ana Maria Toro and his four siblings, Maria Luisa, Maria Victoria, Jose Mª –recently deceased– and Luis. A family dear, for those coincidences of life, would form part of the biography emotional death of my beloved father, dr. José Pérez Martínez.

The child Felix, great sensitivity, grows with a history of creative, as he himself says, that his father was one of the best draughtsmen of the city, and not in vain occupied a place in the School of Fine Arts when it was located on the plaza of the Constitution, at the time director of the center that such an institution, managed on-street Barracks. How many parallels...! José Ruiz Blasco, father of another of malaga universal, Pablo Ruiz Picasso, was a professor of the school of San Telmo of Malaga. The two painters, from perspectives and very different styles, gave the world his art, the two were indisputably genius; a genius with evil genius was, without a doubt, Picasso; a genius with a good genius, our dear and close friend Felix.

As to your first training, acquired in School of the HH. Marist to study later high school at the colegio del Palo, where he received drawing lessons from the father of Oliver, his first teacher. Of these first years of childhood, it is remembered as, with only 8 years old, back to charcoal and hit the picture of the Christ of the Good Death, that his father had in the office and that he had a special devotion. When the painter was about to meet its first five years of life, a fateful morning of may 31, his father went into the house and hugged his mother crying because they had destroyed the Christ of Mena.

After the death of his father in 1935, the family moved to the calle Ramos Marín, no. 2, next to the Teatro Cervantes, where you will spend the whole of the civil war. There he lived part of his childhood, adolescence and youth, where it take place in the years 37 and 38 of its first trial runs of art, exposed in the window of the printing and stationery of Ricardo Sánchez in New street. At the end of 38, 12 years old, exposes ink drawings, watercolors, and portraits of musicians of the time, he signed Félix Revello, in the trade of Felix Saenz in the old square of Bread.

When you start in the Fine Arts studies, were teachers César Álvarez Dumond, Antonio Burgos Who, Rafael Murillo Racing and Federico Bermudez Gil, which would become familiar with the works of Sorolla, Benlliure, Muñoz Degrain, Martínez Cubells, Fernández Ocón...
At age 16, in 1942, the young Felix received his first professional engagement, as it should be painted fifteen banners for the Brotherhood of the Sentence, which consisted fifteen Mysteries of the Rosary and a canvas showing the Virgin of the Rosary with Santo Domingo and Santa Casilda, inspired in a work of Murillo. For all of this I took the not insignificant –for those years– the amount of one thousand pesetas, and recognizing that since its inception its worth artistic endeavor constant and brilliant intuition. A year later, in 1943, Manuel Pérez Bryan, mayor of Málaga at that time, and prestigious doctor, made a public announcement of two scholarships in painting to study in Madrid for 5 years, earning the plaza Félix and being accompanied by Mingorance aan hundred.

In Madrid, the young painter, will live with his aunt Pepa, the sister of his mother, entering the Royal Academy of San Fernando, where you will have as teachers to Benedito, Valverde, Núñez Losada, and he knows Zuloaga, Sotomayor, Solana and Carved, which will take wise art direction. After five years, in 1948, ends the career of Fine Arts with a special Award, and this time we see the first portraits to Somerset Maughan, Walter Starkie and Vázquez Díaz.
In 1950, he received a grant Carmen del Rio, which allows you to travel to Rome where it will remain for a year, being then director of the Academy of Spain, in the Italian capital, your fellow countryman, the painter Fernando Labrada, who had already tried in Madrid and both supported him in his career.

Will be the following year (1952), when you will hold their first solo exhibitions in the Gallery Macarrón, Madrid –portraits, still lifes and flowers– and subsequently in 1953 in the Room, Casino de Madrid, which is consolidated in the art circles as a portrait painter. From that moment he begins to admire and recognize his pictorial work, being applauded both by the critics and by academics. Of those years, approximately, I think that is the most beautiful box of roses that he gave to my father –sometimes he was a doctor in the family– with a note of the that to day of today, I'm very proud: "To the girl Maria Jesus these flowers, a small memory of mine, Felix Revello de Toro" (bull. In the 50's, the young painter assumes the guiding thread of the classic painting Spanish court romantic-realistic. The faces of his figures lie, with a sweet serenity in his paintings.

In 1953, returns to Malaga for marriage with his wife, Mª de los Angeles –his beloved Chini–, and makes the decision to be submitted to the oppositions for professor of Fine Arts, achieving the number one for the Chair of Fine Arts of Barcelona, in the School of Llotja of which he was director Frederic Marés, and where he also served, in its day, the teaching of the malagueño José Ruiz Blasco, father of Picasso. The malaga artist has had in the portrait his dedication paramount. Has shown to important figures in the contemporary history, from the Kings of Spain to personages of the nobility and numerous personalities from the world of culture, politics and finance, even though women are the true protagonists of their works. Female bodies that do gala of a sensual elegance, and erotic content, wrapped in a halo of mystery behind their white robes. Women looking at us from the box with a tinge of unattainable tenderness and joyful nostalgia, perhaps waiting for love to wake you from your dreams.

Bodies of woman as alive and real as ethereal and intangible, so distant and yet so nearby, in a harmonious synthesis of opposites; sublimizadas essences surrounded by presences of our everyday living; the floors, mirrors, jugs, wrapped in a halo of mystery that transport us to a magical world of unknown but joyful feelings. As the Juan Ramon Eternities, Felix Revello introduces us to a woman deified, to a naked woman not in the sense banal, but in the sense of essences infinite , of ETERNITY. Magnificent are the reproductions dedicated to his beloved Empire, to his mother... Sincerity velazquiana, stroke, energetic, sweet, containment and sensual elegance. Now, after so many deaths, his wife Maria Rosa, his muse, beloved, and admired, to help him to paint on that canvas the sublime of life.