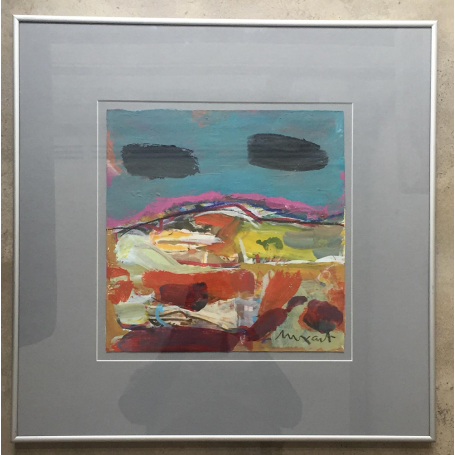 Belonging to the series and exhibition called "Paisatges the·lucinants", may-June 2007.

Painting chosen for the cover of the catalogue of the exhibition.

The work of Muxart is of strong character expressionistic with figurative motifs are structured, and their gestures, appeals to the effects and records a wide range of pictorial material. His painting stands out particularly in the fields "of color, texture, and shape", and its influence is projected both in the art Catalan as in Spanish.

"Painting is my language, the drawing is my memory, the color of my music," said Muxart, that in his work he sought "the balance between energy and judgment, with intuition as a guiding thread". Born in 1922 in the town near barcelona Martorell, in 1935 his family moved to Barcelona. In 1947 he presented his first exhibition in the Room Pictòria of Barcelona and in 1948 he participated in the National Exhibition of Fine Arts of Madrid and traveled to Paris with a scholarship granted by the Superior School of Fine Arts.

In 1954 was formed the so-called Grup Taüll of artists with Marc Aleu, Modest Cuixart, Josep Guinovart, Jordi Mercadé, Jaume Muixart, Antoni Tàpies and Joan Josep Tharrats, a movement that, despite having an ephemeral existence, brought together some of the most prominent names of the Catalan avant-garde of post-war.

From that date exhibits his work in numerous international galleries, and so in 1956 what makes at the Museum of Modern Art of Cairo, in 1957, at the Sala Gaspar in Barcelona and in the gallery at the Strand Hotel Stockholm. In 1958, he took part in the exhibition "8 Contemporany Spanish Painters" at the Ohana Gallery in London, and also in the V Biennial of Sao Paulo in representation of Spain. In 1964 he presented his work at the American Art Gallery in Copenhagen and at Galerie Westing Odense (Denmark). In 1966 he exhibited in the exhibition hall of the Directorate-General of Fine Arts, in Madrid, and in 1972 it did in the Galleria della Babuina, in Rome.

In 1979 he was appointed professor of the Faculty of Fine Arts of the Universitat of Barcelona, and in 1982 assumed the position of dean of the same. He was also academic of the Reial Acadèmia Catalana de Belles Arts de Sant Jordi. In the year 2010, remodeled the old House Couple of Martorell where he built the Museu Muxart, which collects the work of this artist, who died recently in march 2019.