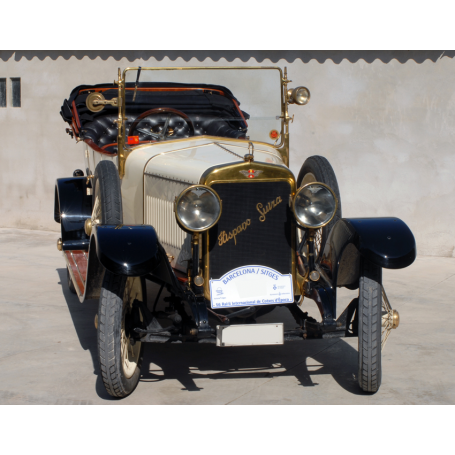 Hispano-Suiza was a Spanish company of luxury cars and competition, which has also had its watershed in the design and manufacture of engines for aviation, marine, transport vehicles, and military, as well as the arms. The brand was founded in Barcelona in 1904 by the Spanish entrepreneurs Damià Mateu i Bisa, Francisco Seix Zaya and the swiss engineer Marc Birkigt. The company had a great development during the second and third decades of the TWENTIETH century until its automotive division was nationalized by the INI (National Industry Institute) in the year 1946, for the establishment of ENASA, a manufacturer of automobiles under the brand Pegasus2 and the nationalization of the division for aero-engines filed in France by the French government in 1920, creating the "Societé Française Hispano Suiza, S. A.", being absorbed by Snecma, a subsidiary of the French group SAFRAN in 1968.

The "Compañía General Española de Cars Cars Emilio de la Cuadra, Limited partnership" was a Spanish company that had been founded in Barcelona in September 1898 by the Spanish military, captain of artillery, and an industrial engineer by Emilio de la Cuadra Albiol.4 Was located in Diputació street, corner of Paseo San Juan in Barcelona.4 in Addition to manufacturing cars also carried the representation of the cars Benz.

At the suggestion of Carlos Vellino, an engineer of swiss origin who worked in the factory, Emilio de la Cuadra hired in August 1899, a young swiss engineer 21 years of age who had been working in Barcelona for several months, Marc Birkigt.

Due to the failure of the electric motor, to make the public demonstration in August of 1900 once called the press, Vellino leaves the company and Marc Birkigt is appointed technical director.

While the design of the electric car ended in failure, interrumpiéndose its manufacture, in 1900, Marc Birkigt had studied in the meantime the cars of Benz that represented the company, focusing mainly on the mechanical part. In this way, Birkigt realized the enormous possibilities offered by the engine explosion, coming to the conclusion that this would be the future of the automotive industry.

In this way, Marc Birkigt built several units in 1900 to test an internal combustion engine that proved to be a success thanks to its great quality, simplicity and functionality, standing out clearly over the remaining market. Birkigt designed two engines, both two-cylinder with 4,5 and 7 HP, respectively. In mid-1901 the vehicles of The Block began to be ready.

However, the financial capacity of the Block was very limited, which joined the general strike of may, 1901, and to the few sales of cars Benz, led Emilio from the Block were to declare the suspension of payments in that same year. The military sought to re-enter the army.

The company made only about five copies of the series of six that I had planned.

Golden age of Hispano-Suiza, years 20 and 30

The success achieved by the Spanish brand with their engines of aviation during the First World War, caused their capital to grow enormously, giving as a result 6.500.000 pesetas of capital in 1915, and 10,000,000 pesetas in 1918. Given the growing demand, we purchased more land in The Sagrera and opened a new factory in 1915 in the town of Ripoll to set the auxiliary sections of the company.

Since that time, the Hispano-Suiza sported a new emblem along with the flags of Spain and Switzerland: the stork, in honour of a squadron of French aircraft equipped with engines Hispano-Suiza, which was highlighted by his victories in the war with a fighter who had painted this bird on the fuselage of the aircraft. When in 1917 he died in combat one of the most prominent drivers of the aviation partner, Georges Guynemer, a member of the above-mentioned squadron of storks, Hispano-Suiza adopted the stork as a mascot of the brand in tribute to the hero.

The first appearance of the stork silver was produced at the Paris motor show of 1919, on the hood of the new Hispano-Suiza H6B, a luxurious car, avant-garde and sophisticated technique that rode the new engines based on the aviation. The vehicle incorporated in addition to a world premiere: the brakes servoasistidos. Very soon, other brands like Rolls-Royce, Renault and General Motors asked for the patent to Hispano-Suiza, due to the fact that this was an effective system to brake properly cars of much weight, as the large luxury saloon car.

Meanwhile, in Barcelona is paralyzed almost totally the production in 1919 as a result of the strong tensions at work.

In the year 1920 he is back on the production in the factory of French of Bois-Colombes with the new chassis of the H6B, a car ahead of its time, equipped with 6-cylinder engine, and 6.6 L, capable of reaching 150 km/h. The model was created with the aim to compete with Rolls-Royce and was a success in the market.

Also in January of 1920, the kings of Spain inaugurated the new factory Hispano in Guadalajara, requested by king Alfonso XIII to Damián Mateu to ensure the supply of cars, trucks and aviation engines for the Spanish army. The new society had been established in 1917 with the name of "The Hispanic, automobile Factory and material of war, Limited partnership". While Mateu was its president, and the designs of Birkigt, decided to give an independent entity. There were also military forming part of the board of directors. In it were a few affordable cars that not incorporating the Swiss flag in the shield, as the model "Guadalajara", a utility type 24 8/10 HP, but above all, it built trucks for civilian use and military, guns, and military equipment. During that period there were also some armored vehicles for combat and also created a separate section for the construction aircraft, the Hispano Aircraft, which came to have aerodrome itself.

It is worth noting the victory in 1921 the king Alfonso XIII in the course of "La Cuesta de las Perdices" (Madrid), establishing a new brand with its torpedo H6 series, getting very good reviews among the public and connoisseurs.

In parallel, Hispano-Suiza continues breaking records in 1924 with the new model H6C released by the factory of Paris, of 160 HP and well over 150 km/h the car's fastest of its time. We designed two versions, a long wheelbase luxury and another short chassis for the competition. That year he sold two cars H6C chassis short to Great Britain, one to captain Kingston and the other to Wolf Barnato, who broke 8 world records in November 1924, in the motor racing circuit of Brooklands. With the passage of the years keep piling up victories with the H6C chassis short in Spain, the United Kingdom and the united States, where Charles Weyman beats a Stutz-board the H6C in the Circuit of Indianapolis in September of 1928.

In 1924 in Barcelona began the manufacture of the T49, a simplified version, and reduced the large H6 French, who had a 6-cylinder engine with the configuration identical to the large model but with the cylinder head detachable. Both this and the block were cast iron. A year later came out also in Barcelona the T48, a inferior model of 4 cylinder, 58 HP.

In 1925, Carlos Ballester obtained the representation of the brand Hispano-Suiza in Argentina. The agreement included in a first phase the import of the chassis, and later construction of the car bodies in the country, and later to be manufactured in its entirety. It was created so that the society "Spanish-Argentine Automobile Factory S. A. (HAFDASA)", intended for the production of cars and engines, Hispano-Suiza, in addition of parts and accessories for this and other brands of cars, trucks and buses. Among the manufactured models highlights the T49, it is estimated that the number of copies produced around 200. The Hispano-Argentina came to produce diesel engines of their own, up to 150 HP. With them equipped trucks and buses that had little to do with the Hispano-Suiza Spanish.

From 1926 to 1929 also made the successful H6B under license, in the territory of the former Czechoslovakia on the part of the brand Škoda. First of all, putting together the components received from France, in order to subsequently fabricate and assemble the car in its entirety. They came to build about 150 cars that were referred to as "Škoda-Hispano-Suiza 25/100 PS".

In 1928 he launched in France a new model, the supreme 56 46 HP and 6-cylinder steel niturado that as in previous years confirmed the superior quality of the brand, technology, design and elegance.

A year later, in 1929, it started in Barcelona in the construction of the H6C bis improved version of the T60.

In the field of aviation it is worth noting the flight of the Jesus of the Great Power in 1929, an aeroplane Breguet 19 driven by an engine Hispano-Suiza 600 HP, which crossed the Atlantic Ocean from Seville to Bahia (Brazil), and shortly after, an airplane equipped with an engine designed by Marc Birkigt was a historic flight to go nonstop on the route Paris-New York. It would be the greatest feat of the time.

Proof of the economic growth experienced in Europe during the 20's are the two exhibitions held in Spain in 1929. The first was the Exposition Ibero-Americana de Sevilla, in which the flag of Hispanic-Switzerland was located in the Avenida de Portugal, the work of the architect Vicente Traver and occupying a surface area of 1,500 m2. In that same year was also organized the International Exhibition of Barcelona, being located in the pavilion of the firm on the avenue of the Mirador in front of the National Palace of Montjuic.

Models in chronological order (cars of city and tourism)