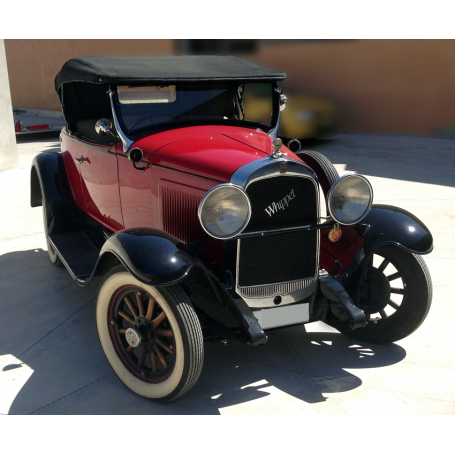 Willys was the brand name used by Willys-Overland Motors, an american automobile company best known for its design and production of military Jeeps (MB) versions and civilians (CJS) during the 20th century.

In 1908, John Willys bought the Overland Automotive Division Wheel Company standard and in 1912 renamed it Willys-Overland Motor Company. From 1912 to 1918, Willys was the second largest producer of automobiles in the united States after Ford Motor Company .

In 1913, Willys acquired a license to build the Charles Knight's sleeve-valve engine which it used in cars bearing the Willys-Knight nameplate. In the mid-1920s, Willys also acquired the FB Stearns Company of Cleveland, Ohio and assumed continued production of the Stearns-Knight luxury car as well.

John Willys acquired the electric Auto-Lite Company in 1914 and in 1917 formed the Willys Corporation to act as its holding company. In 1916, they acquired the Russell Motor Car Company of Toronto , Ontario , Canada , by 1917 New Process Gear , and in 1919 acquired the Duesenberg Motors Company plant in Elizabeth, New Jersey . The plant in New Jersey was replaced by a new facility, larger and had to be the place of production of a new Willys Six, but the recession of 1920 brought the Willys Corporation to its knees. The bankers hired Walter P. Chrysler to fix the mess and the first model to go was the Willys Six, deemed a disaster of engineering. Chrysler had engineers cars Owen Skelton, Carl Breer and Fred Zeder begin work on a new car, the Chrysler Six.

In 1917 the ward M. Canaday, who had been doing advertising for the company, became a full-time employee.

In order to raise the money necessary to pay the debts, all the assets of the Corporation Willys went to auction. The plant of Elizabeth and the Chrysler Six prototype were sold to William C. Durant , then in the process of building a new, third empire. The plant constructed low priced Durant star , while the prototype Chrysler Six was improved and modified, becoming the 1923 Flint .

Walter Chrysler went to Maxwell - Chalmers , where in January 1924 he launched his own version of the six-cylinder Chrysler he had been working, based in part on the elements developed in Willys. (In 1925, the rental company Maxwell became the Chrysler Corporation.)

At this point Willys decided to clear the boards and produce two new models - the 4-cylinder Willys 77 and the Willys 6-cylinder, 99 - but the company was on the verge of bankruptcy again, so only the 77 went into production. He was forced to sell its canadian subsidiary, itself in weak financial situation, and began a mass reorganization. Only the ground of the main assembly and some little factories remained property of Willys-Overland. The other assets were sold to a new holding company that leased some of the properties back to WO. The parent company was thus able to weather the storm. In 1936, the Willys-Overland Motor Company was reorganized as Willys-Overland Motors.

In 1937 Willys redesigned model of 4 cylinders. Won a body semi-aerodynamic with a windshield inclined, headlights embedded integrally in the mudguard and a single-piece, rounded hood transversely hinged at the rear.