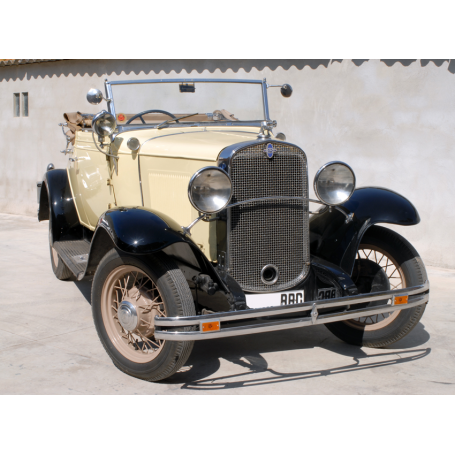 Sedans Chevrolet, were a series of touring cars built between the 30s and the 40s by the us-based manufacturer General Motors, for its division Chevrolet. It was a series of cars full size, mostly in body two door coupe that was manufactured by General Motors since the year 1937, receiving many different names.

Basically, these sedans shared their mechanics composed of a front-engine longitudinal 6-cylinder, in line, between 3800 and 4000 cm3, with boxes of speeds of three gears and rear-wheel drive. The cars were presented in different name, with the Line Master, the Line Special Deluxe, the Line Style (Styleline) and the Line Deluxe.

The production of the sedans Chevrolet was started in 1937, stopping momentarily in 1942 affected the production by the recession of the Second World War. After this conflict, the production was restarted in 1945, continuing until the year 1952. These cars were replaced by the models 150, 210 and Bel Air. These units were also imported to different countries, particularly their marketing in Argentina, where the Sedan Fleetmaster were used for the development of competences of Tourism Road. With a Chevrolet Fleetmaster, Juan Manuel Fangio five-time Formula 1 world champion, won his first two championships of motorsport, to win in the years 1940 and 1941 their only two championships of TC and the first two titles of the Chevrolet brand in that category. A few years later, in 1966, Juan Manuel Bordeu would repeat the success achieved by Fangio, giving the Coupe Chevrolet its third title, and the last achieved by a car of these characteristics, before the advent of compact cars and Sport prototypes that initiated a new phase in the TC.

The first vehicle Chevrolet used the name Master, it was a vehicle introduced in the year 1932, which was designed and engineered to provide replacement to the sedan Chevrolet Confederate. However, it was not until the year 1935 that Chevrolet made its first sedan of full size, to make your presentation the Chevrolet Master Deluxe.

The new model, was presented as the version EA/FA Series or ED/FD Series, and was released in the year 1935. This model presented a new style of bodywork, making its premiere on the steel system fully implemented by the Fisher Body CO. This model, no longer offered versions Cabriolet, or Roadster, but its range was composed by two variants of coupe and four sedan 4-door.

As a novelty, the AD Series would also bring a new system of suspension in its front axle: The new system "Dubonnet" was the use of coil springs instead of the old system of leaf springs semielípticos used in models of 1932-1934. The old system of suspensions was available in the version known as the ED Series. The distance between the axles, had grown to reach out to 2.870 millimeters. The following year, the models present a new and more rounded figurehead of the radiator and steel wheels with standard lightning. These versions were referred to as "FA Series" (with the system of suspension Dubonnet on your front axle) and "FD Series" (with the suspension system of leaf springs). For these latest versions were developed the previous year a system of suspensions with coil springs, which were available as standard. These cars were equipped with the old 6-cylinder engines in line and 3.389 cm3 that kitted out the models of 1932, capable of developing between 79 and 80 HP (58 and 59 kW). In two years, 846.300 Master Deluxe were developed between the lines EA, ED, FA and FD Series.

The line Special Deluxe, known as Chevrolet Special Deluxe, was introduced in the year 1940 as a vehicle four-door sedan. Were presented three versions of this model, particularly the versions measuring stick fleetline and Fleetmaster. In 1940, he was presented the first version sedan Special Deluxe, which was named as the KA Series. This model had a better equipment than its predecessor, the line Master Deluxe, which was, above all, displacing its predecessor, the half of the ladder models. The way to recognize a Special Deluxe, was in their finishing of high-grade steel, added to the bonnet and bodywork. As in the case of the models of the range of low prices, the grate front consisitía in a narrow central section curved forward, with lines chrome horizontal, with small sections winged in the side areas medium-high. The front lights, were installed in the front part of the fenders, which were position lights additional. The hood was designed with the shape of the head of a crocodile, being fastened at its rear. Six versions were available for the line Special Deluxe: Two coupes different, a cabriolet with two doors, two sedans 2 0 4 doors and a pickup of 5 doors and 8 seats. With 431.199 units, the Special Deluxe was the Chevrolet that more sales won.