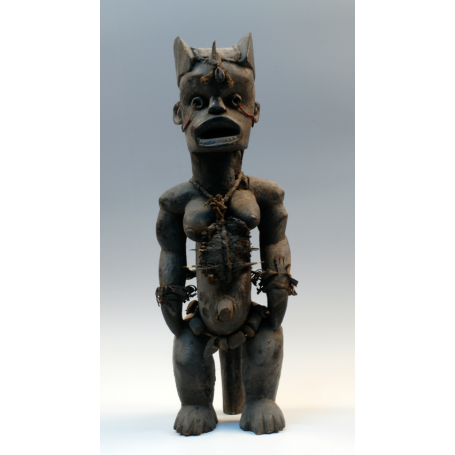 The statue belongs to the family fang, spread over a wide territory that goes from the South of Cameroon, including Gabon to Equatorial Guinea. This size anthropomorphic is related to supernatural forces and magic, is characterized by its function of hunting demons in the ceremonies, is placed on the so-called bieri, boxes of wood containing in its interior the skulls of the chiefs of the tribes. Figure in an upright position, rigid and hieratic, with the arms hanging down, parallel to the body. In the face you can observe a great expression due to the open mouth, in addition to being quite striking the string that comes out of the eyes to hold in the ears. On the back there are inlays of bone. The figure is full of ornaments all over the body, necklaces, bracelets, bangles and a belt with accounts, all these ornaments are part of the attire of the fang to the beginning of the century. The sorcerer of the village fang, knower of the ritual, acts as the intermediary to the forces that wish to invoke, to accept the offering and to impose upon the figure of their supernatural forces.