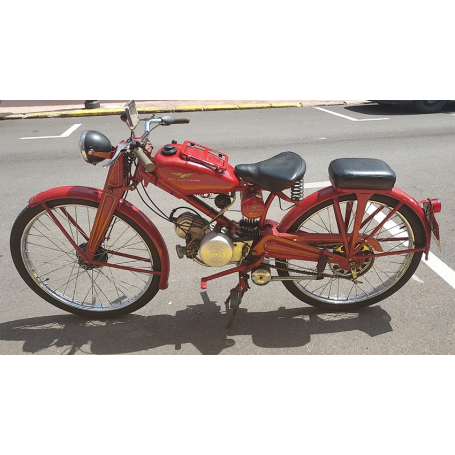 Central suspension in the engine.

After experiencing financial difficulties in the 1960s, De Tomaso Industries Inc. (DTI group or DTI), owned by the argentine entrepreneur Alejandro de Tomaso, a manufacturer of sports cars and luxury, purchase the SEIMM, along with Benelli and Maserati in 1973. Under the management of De Tomaso, Moto Guzzi returns to be a profitable business,5 although some reports indicate that it is a period of limited investment in Moto Guzzi, which is attributed to DTI, puts car company.6 however, in 1976, Guzzi, launches to the market the model Le Mans 850. A motorcycle that was a masterpiece of style and even today is considered as one of the most iconic and sought-after products of all Guzzis. A commercial success that competes with other supermotos Italian, and that spawned four later models: the Mark II, III, IV, and culminating in the 1990s with the V. The initial model is widely known but incorrectly as the Mark I. Technically, it is simply the first Le Mans 850. The name was given in homage to the famous endurance race 24 hours race at the circuit race in France. The Mark I had two production runs with slight modifications. The Series 1 used a light rounded back and included an indicator light of brake actuation, it had various Italian made motorcycles of the time. Were built less than 2,000 units, and was the Guzzi most desirable of the era. Of the Series 2, there was a total of around 4,000 units, and used a rear reflector square designed by the De Tomaso. This was also used in the Mark II and the models SP. The rear fender was bigger and was the biggest change between series 1 and series 2. In addition, other modifications included an odometer partial, low black on the fork, a double seat generous that replaced the previous series that had a seat for the pilot and another for the one who was traveling behind, a silencer is protected and fuel cap. The additional cost in comparison with the model T3, was justified by the elements of performance, such as high-compression pistons with intake valve and exhaust bigger, and a carburetor Dell'orto 36 mm with a pump without a filter, grey. Most of the bikes MKI, they were bright red, but there were also a small number of ice blue metallic and a smaller number yet of the series 2 of white color.

In 1979, appears in a limited edition of units with an engine of 2 cylinders in V, refrigerated by air, designed by Engineer Lino Tonti, and was introduced as the V35. Radical when introduced, the design possessed crankcase divided horizontally and piston head concave. The first, was a common feature of contemporary design japanese motorcycles, while the latter was widely used in automobile engines. Both of these features allowed the production in series more efficient and also the design of the engine and the associated components reduced the weight of 249 kg (548 lbs) of the contemporary 850 T3 to 175 kg (385 lbs) of the V35.

The power of the original V35 (35 HP/26 kW), allowed him to compete with engines of increased displacement (V50, V65, V75) but was quickly overcome by the engines water-cooled. As Guzzi continued to develop the V-TWIN, the power increases in the mid-1980s, when it produces in series the engine of four valves and "block small". Of them, the 650 and 750 were classified in the category of 60 HP (45 kW) and 65 HP (48 kW), respectively. The production of the engine 4 valves "block small" ends at the end of 1980.

The bikes Guzzi have used a hydraulic system built-in braking, where the front disc right works with the lever on the handlebar, while the disc front left and the rear disc is actuated by the brake pedal. Still under the tutelage of De Tomaso, in 1988, Benelli and SEIMM, are merged to create a 'Guzzi Moto Benelli (GBMSpA)'. During this period, Moto Guzzi exists as an entity within the property of MBG, De Tomaso, but in 1996, to celebrate its 75th anniversary, the firm re-use its original name, the: Moto Guzzi SpA. In 1996, De Tomaso is convirte in 'Trident Rowan Group, also known as TRG.

Under the helm of Ivano Beggio, Aprilia SpA acquires 'Moto Guzzi SpA" on 14 April 2000 for $ 65 million. According to the original press release, the intention was that Moto Guzzi would remain headquartered in Mandello del Lario and would share the technological advances of Aprilia, R&D, and financial resources. The fusion would last a very short time. Aprilia stumbled financially and at the same time try to diversify its production into other areas of manufacturing. Apart from this, the new Italian laws required helmets for motorcyclists, and the increase of the insurance rates for motorcyclists adolescents, reduce sales and severely affects the profitability of the company. However, Aprilia invests large sums of money for the renovation of the plant of Moto Guzzi in Mandello.8 These renovations culminating in an offer by the company group Ducati Motor. Also interested in Kymco9 and the subsidiary BRP Rotax. The assembly line of Moto Guzzi, will remain closed during a short period in march 2004, due to financial difficulties.

On 30 December 2004, Piaggio & Co. SpA acquired Aprilia-Moto Guzzi and, therefore, it happens to be the largest manufacturer of motorcycles in Europe. Moto Guzzi Sp. Officially becoming a shareholder of Piaggio, part of Immsi Investments SpA, which has allowed the introduction of a series of new competitive models and rapid succession. In November 2007, Moto Guzzi unveiled the theme retro 2008 V7 Classic on the motorcycle, and the spectacle of Bicycle Manufacturers in Milan, Italy. It was available in Europe in mid-2008, and Moto Guzzi announced plans in late 2008 to be available to buyers in the united States.