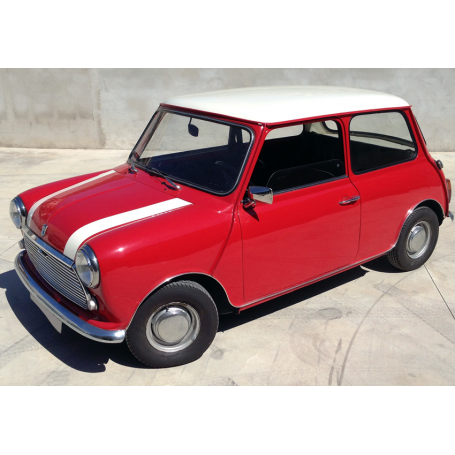 The Mini is a small automobile of segment To produced by the British Motor Company and its corporate successors between the years 1959 and 2000. This car, the most popular of those manufactured in Great Britain, was then replaced by the new MINI, launched in 2001. The original is considered an icon of the 1960s, and its distribution space saving with front-wheel drive influenced a generation of car manufacturers. In the international survey to determine the car of the century's most influential around the world, the Mini was second, only behind the Ford T.

This revolutionary car was designed in BMC by Alec Issigonis. It was manufactured in the United Kingdom in factories in Longbridge and Cowley, Oxford, and later also in Australia, Belgium, Chile, Italy, Portugal, south Africa, Spain, Uruguay, Venezuela and Yugoslavia. The Mini original had three important updates: the Mk II, the Clubman and the Mk III. The "Mini Cooper" and "Mini Cooper S" were sport versions that had great success as rally vehicles, winning three times the Rally of Monte Carlo. Mini stood out above all easy to drive and its great stability: it Was a small car, fast and of high quality, although sometimes the resistance of the engine did not respond to the expectations of hardness that foretold the prestige of the brand because of their frequent, unexpected and costly breakdowns: they Were too repetitive visits required for the workshop.

Began to be sold as Austin Seven and Morris Mini Minor, in addition to variants sedan as Wolseley Hornet and Riley Elf.

The Mini was produced in several bodies: A two-door coupe, a family version, a van, a pickup truck, a model a beach with no doors and the "Moke", a variant of off-road.

Your body was built with metal (we used steel in the car bodies original) and with glass fiber (In countries such as Venezuela and Chile, local laws required that cars had a high percentage of local parts, so that the glass fiber was present in both countries. Also introduced in front of the cars original in steel, the advantage of not suffer oxidation.). The Mini was produced with gasoline-engines of 850, 1000 and 1100 cc engine capacity, in addition to the Austin Mini Cooper 1275 cc engine and dual carburetor. The Mini, as the MG 1300 Mark II ( body BMC ADO 16) were equipped with hydraulic suspension Moulton, which gave it a smooth ride.

Your board analog was built on wood panel, mahogany. Its center of gravity is very low making it ideal for taking curves at high speed. In addition, its small size allowed to park easily.

The production models differed from the prototype in the addition of submarcos front and rear to the self-supporting structure to pick up the loads from suspension, as well as in the rotation of the motor, placing the carburetor in the rear instead of the front. This led to the need to establish an extra gear between the engine and transmission to reverse the direction of the motor, making this gear reducer would have the beneficial effect of reducing the loads on the gearbox and prevent the rapid wear of the synchronization system changes (synchromesh) that had been a problem in the first prototypes. Have the carburetor in the rear of the engine helped to reduce the freezing of the carburetor, but exposed the distributor to water coming in from the grill. The engine size was reduced from 948 to 848 cc, which reduced the excess by then-maximum speed of 145 km/h to a more manageable 116 km/h. In 1967 the engine was returned to 948 cc.

Despite of its origins and utility, the classic silhouette of the Mini became so iconic in the 1990s, the group Rover (heirs to BMC-were able to register its design as a trademark.

In the year 2001, BMW (which had previously acquired the group Rover) ceased production of this classic vehicle to begin to produce the new MINI, a modern reinterpretation made 42 years after the launch of the Mini original.

Acceptance of the Mini

The Austin Mini proved to be a real revolution in the automobile in its time, and it is also very popular, because of its size, versatility and performance.

The colors and the design made to stay immune to the fashions of automotive for several years. A variant, more of the Mini was the MG 1300 Mark II 1300 cc.

In Chile, it is sold Minis of body metal and fiber glass, much more resistant to corrosion. Its highest point was in the late 70's and early 80's, where they were much appreciated by the young chilean. With the closing of the trading Leyland spare parts, marked the end of the era of the mini at the end of the years 90, now being a car for collectors and clubs, it is rare to see them in circulation.