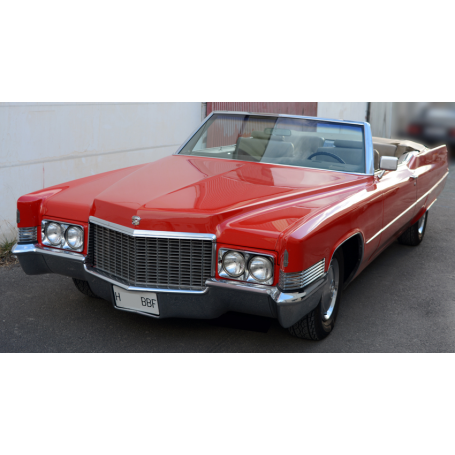 With soft top original (somewhat worn from use).

In perfect state of functioning. Chrome in very good condition.

Vehicle convertible automatic, with a hood on veige with bezel and back with a covered hood to game.

Redesigned in 1965 having a distance between axes for 129.5-inch (3.290 mm ). The tailfins were inclined slightly downward, and the lines of the body , clearly defined, replaced the rounded look. Also had new a rear bumper straight and groups of vertical beacons. The pairs of headlights were changed from horizontal to vertical , allowing in this way a grid wider . Frameless side windows curves appeared , and convertibles acquired lights background of tempered glass . New standard features include lamps for luggage , glove compartment and passenger compartment front and rear and rear seat safety belts. The horses were still supplied by the 340 horsepower 429 cubic inch (7030 cc) V8 , which would be replaced by the 472 cubic inches (7730 cc), corresponding to 1968. The perimeter frame allows for the repositioning of the engine six inches forward in the frame, which decreases the hump of the transmission and the increase of interior space. Sedans with pillars appeared in the series Of Ville, for the first time, while it pulled out of six sedans ceiling window hard. A ceiling of padded vinyl was an option for an additional cost of $ 121 in the model of hardtop. The four models of De Ville had small nameplates on the ends of its rear fins just above the side molding, the chrome.

In 1966 changes included a mesh something more just to fill the radiator grille, which now was divided by a thick , bright metal horizontal center of housing bar parking lights are rectangular at the outer ends . Side marker lights rectangular replacement designs extension grill whole. In general, there was less chrome on all models of the Cadillac of this year.

The 1967 De Ville was extensively restyled. The style features prominent were given a front aspect of a large scope with front tilted forward, long, lines of the body sculpted, and redefined the rear fenders that had more than a hint of tail fins in them. The full-width, "was flanked by the headlights stacked dual , for the third consecutive year. The fill of the square grill cornered had blades that seemed to emphasize its vertical elements and it seemed to both the top of the defense and by means of a cutting of the horizontal slot in it. The parking lights are rectangular, were built at the outer edges of the grill. Reviews of style of the rear end is highlighted by metal divided taillamps and a bumper on the bottom painted. The Coupe de Ville has a new roofline, inspired by the salon of the car of Florence created for the New York World's Fair of 1964, which gave to the passengers of the rear seats, privacy. As in the exhibition of cars, the window glass quarter retracted backward in a panel of the sail. Variations of the adjustment of minor interior and slightly more rich separated De Ville of Calais. The word of the firm to the Tiffany-style chrome is again above the side trim to the bodywork on the rear fenders. New standard features Of Ville include the rear-view mirror without brightness, electric clock, automatic temperature control, dashboard padding, system of warning of danger, the retractors of safety belts in outboard and lighters in the rear in all styles.

In 1968 he received a mesh more fine in helping the outer section that kept the parking lights are rectangular, only a little higher than before.

The model of 1969 got an image in the style Eldorado looking over everything in the front fender.

In 1970 a facelift included a grille with 13 vertical blades set against a rectangular opening, delicately striped. A total of 181,719 DeVilles were sold.