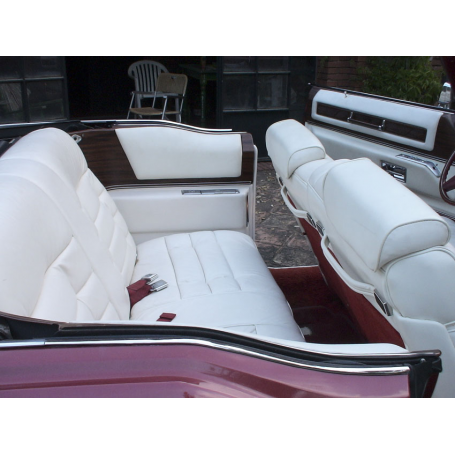 Original state. Only Hood that is new.

Although the glass door on all Eldorados remained frameless, the windows of the rooms in the rear hard top disappeared, replaced by a fixed "window of the opera" in the expanded pillar "C". This was done probably to comply with federal safety standards threatened to roll-over that was planned to come into force in the 1970s.

From 1973 the Eldorado was removed from Fleetwood sub-series status and reestablished as its own series is totally different.

The Cadillac Eldorado was chosen as the car of security for the Indy 500 in 1973. All in all, Cadillac produced 566 of these cars convertibles special rate. Thirty-three were used at the track during the race week and the remaining 513 cars were distributed to dealers in the U.S. Cadillac (one for each dealership), which were sold to the general public. Total sales rose to 51.451. Eldorado now represent over a sixth of all sales of Cadillac.

A redesigned instrument cluster was removed during the model year 1974 (known as the panel "space age" instrument of the literature Cadillac), also shared with the Calais, De Ville and Sixty Special.

For 1977, the Eldorado received a new grille with a pattern of striped finest. The convertible was canceled (although the coach custom of Lima, Ohio took a few brand-new 1977 and 1978 Eldorado in their facilities coachbuilder and became coach of the convertible with salvaged parts 1971-76 Eldorado, Cadillac convertible not produced after 1976). The engine V8 8.2 L of 1970-76 gave way to a new V8 with 180 HP 7L (134 kW). Also in 1977, all the cars in the body-were made exclusively with front-wheel drive for the first time, when it is removed, the Buick Riviera of this platform, during a pause of two years (after which it also passes to the front-wheel-drive in 1979). Minor changes followed in 1978.

This generation of Eldorado produced between 1971 and 1978 were adapted to the times as seen in films like Dolemite, Superfly, Highwaymen, the Mack, The, Willie Dynamite, (the customized Eldorado seen in Willie Dynamite is similar to the one seen in Magnum Force) and even the James Bond Live and Let Die. An Eldorado was also used in the second film of Rob Zombie, The renegades of the devil as the car that drove the character of Charlie. Customizers such as Les Dunham Coachworks have modified brand new Eldorados with covered headlights (commonly known as Superfly headlights), caps grill, an ornament of hood 1941 goddess, tubing, lakes, and thick-padded vinyl tops, usually with a porthole circular window.
Eldorado convertible for 1976

In 1976, when all the convertible home had vanished, GM heavily promoted the american industry's only remaining convertible as "the convertible american past." The 14,000 would be sold, many purchased as investments. The final 200 convertibles produced were designated as "Bicentennial Edition" commemorating the 200th anniversary of the birth of the united States. These cars were white with a dual-color red / blue pinstripe along the side of the upper body. In 1983, when GM reintroduced convertibles, 1976 the owners of Eldorado, who felt that they had been deceived, launched a class action lawsuit, without success.
Eldorado Biarritz

Unlike the Cadillac Sixty Special and De Ville, Eldorado did not have a package of unique luxury that will provide a change of title (as the "d'elegance" package). This was rectified in mid-1976 with the package of Biarritz. A unique feature of the court of Biarritz, a name that has not been used since the model year 1964 (although the body Fleetwood Eldorado was from the model year 1963 onwards, the designation Fleetwood only applied to all Eldorados produced from 1965 to 1972 model years ) was a ceiling of brushed stainless steel that covers the compartment of the front passenger for model years 1979-1985. This was the signal that recalls the style of the sedan 1957/58 Eldorado. The rear of the roof was covered with a lid, padded vinyl landau heavily accented with large lights "Opera". In the interior, the seats 'cushioning' style of "tufted" velour or leather, with contrast piping, along with a number of other options available.